“I just can’t take it anymore,” Michael Beck told other prisoners at the W. F. Ramsey Unit state prison, in Rosharon, Texas, 33 miles south of Houston. Then during the first week of January, he wrapped a fan cord around his neck and tied the other end of it to the railing on Row 2 of his cell block.

Beck leapt up and then fell 20 feet, his head hitting the steel and concrete stairwell below. Two prisoners rushed to him and carried him up the stairs. Fortunately, the cord snapped and somewhat broke his fall. After the guards stopped laughing, they handcuffed him and had him shipped to the nearby Jester IV Unit, a psychiatric prison.

No one called for medical help or provided a stretcher. Over 50 prisoners saw this horrifying event. Prison officials did not take witness statements. No counseling was given to the traumatized men, who were already reeling from the COVID virus and the subsequent lockdowns that have infected almost every person in the prison.

Prison during a pandemic

Regarding protection from the virus, masks given to the prisoners are made by prisoners working in the laundry. They cut up prison bed sheets, which are so thin that this reporter can see her household lights through the fabric of the mask she was given.

No Texas prisoner has received visits since last March. Phone calls are allowed for some, depending on their disciplinary status. The isolation is mentally challenging. The craft shop is not open. Schooling is done via mail.

The Ramsey Unit has three recreation yards and two gymnasiums, yet they were rarely used until dozens of prisoners recently filed grievances regarding the lack of recreation time. Prison activist Nanon Williams reported, “Now they are running recreation all day and night. Before, it was only on their paperwork.”

The stress increases every day in all U.S. prisons, jails and detention centers, where it is impossible to socially distance. At the Ramsey Unit, proper masks are not given out until after a prisoner tests positive for the virus. Then that person’s entire wing is quarantined. Only after the virus is present do prisoners on that wing get N-95 masks.

But the Ramsey Unit reportedly has 4,000 N-95 masks in storage. Williams said, “These masks are not being used to prevent the spread of the virus, but instead are used only when the virus is already present. Prisoners are being moved around, and it’s impossible to socially distance.” 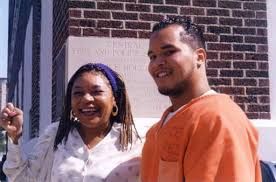 Nanon Williams with his mother, Lee Bolton, in 2000.

No retaliation for exposing conditions!

Prisoners who write grievances or contact their families or the news media with information about conditions that are dangerous, inhumane, illegal or racist should not be retaliated against. Often, prisoners who file grievances or complain about conditions are shipped out to another prison unit, far from family and support. Or they may lose their jobs working in the kitchen or laundry and be put out in the fields. Or their parole may be denied because they are a “trouble maker.”

One particular officer, who was involved in a disciplinary case quota scam a few years ago, is now trying to find out which prisoners corresponded with the media. Lieut. Joe Lopez ordered a quota system at the Ramsey Unit two years ago. It resulted in the Texas Department of Criminal Justice changing the policy to expressly prohibit requiring guards to meet disciplinary quotas.

After the quotas were exposed in Workers World newspaper, the Houston Chronicle and other major media, Lopez was demoted in rank. Last November when an article appeared in Workers World Newspaper that had his name in it,  he told prisoners who work around him that he is going to “f–k over” those who specifically communicated with WW.

Prisoners say he can do this by having guards working under his command plant contraband on prisoners or enter the phone numbers of a prisoner’s relatives into a cell phone that is mysteriously found.

Williams has repeatedly told WW that he follows all prison rules, but that he has a right to correspond with media in Texas and the U.S. regarding guards’ and officers’ abuses and violations. He told this reporter, “I am not in fear of my life. I do not want to get transferred away from my family for reporting the wrongs that I see or writing articles or books or whatever. I am within the rules of the governing policy here and should not be punished for doing so.”

No prisoner should be threatened with retaliation for doing what is legal. It is the carceral state that needs to be retaliated against. Prisons torture, maim and murder every day. Not only should prisoners expose and fight against this, but it is the duty of those outside the prisons to support those prisoners.

United in solidarity, we will tear down the walls!