The large demonstration of fascist, white-supremacist forces in Washington, D.C., on Jan. 6 brought back memories for this writer of the “Unite the Right” rally in Charlottesville, Va., over three years ago.

Aug. 12, 2017, was filled with the most horrible racism and violence and the murder of anti-racist activist Heather Heyer.

And that day this writer saw the fightback of working-class and oppressed people overcome the fascists and send their movement into disarray. As far-right forces are increasingly emboldened and organized in the U.S., it’s worth looking back on Charlottesville for lessons we can apply today. 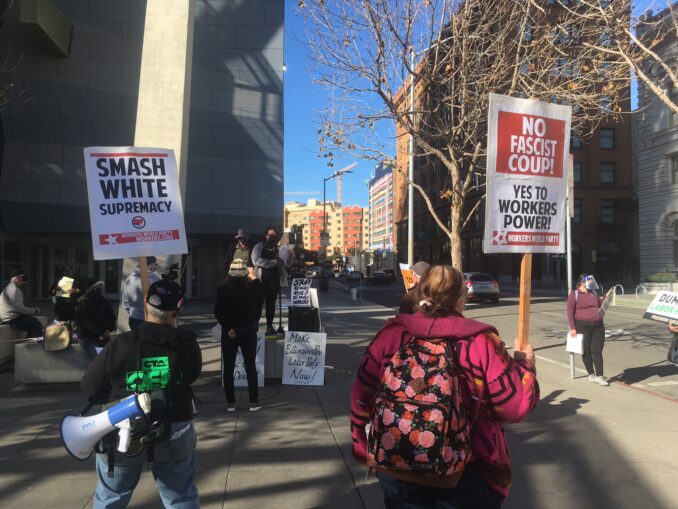 The police and far right have a long history of collaboration, evident on Jan. 6 and in Charlottesville. In both cases the police stood by and even assisted as far-right violence escalated. Why? Because police and fascists serve similar roles for the ruling class: deploying violence and intimidation against the most oppressed — especially Black, Brown and Indigenous people — in order to keep the whole working class down. Once we understand this relationship, it will be clear we can never rely on the police to counter fascist violence.

Police function inside the structure of the state, and fascist groups outside of it. Their similar roles explain why so many cops are members of fascist organizations and vice versa.

Only rarely will police arrest the occasional white supremacist to cover their real role. Revolutionaries must continue to expose the link between the police and the far right, dispelling the liberal notion that we can count on the cops.

(For a deeper look at the connections between the police and the far right, read ‘The Klan & the Government: Foes or Allies?’ by Sam Marcy at workers.org/books.)

Lesson two: The working class is not the base of fascism

The common stereotype of a white supremacist is a dirt-poor white worker, often from a rural area. In Charlottesville, it was immediately clear the fascists were coming from a different social strata: The majority had substantial disposable income, enough to buy expensive uniforms, tactical equipment, guns and vehicles and to travel from across the country for the rally.

A similar pattern could be seen Jan. 6, with many of the rioters being businesspeople and at least one arriving on a private jet! While fascist movements draw in some white workers, their primary base is the petty bourgeoisie: small business owners and self-employed sectors. These elements are anxious on the one hand about the rising power of workers, especially from oppressed nations, and on the other hand the power of large capitalists, who threaten to grind them down into the working class.

The far right does not speak for the working class. The exploited class is not only white — it is Black, Brown and Indigenous. It is undocumented migrants, Muslims, women and gender-nonconforming people, LGBTQ2S+ people, seniors and individuals with disabilities. It is primarily the most oppressed sectors of society, whose labor is most brutally exploited for profit by the capitalist class. The working class is comprised of the very people most targeted by a fascist movement — those who have historically led the resistance against it.

No elected politicians or sections of the Democratic Party showed up in Charlottesville to oppose the far right. The opposition consisted of various left political forces (Marxists, Anarchists, Social Democrats), Black activists and unaffiliated workers.

The common liberal response to fascists is to ignore them, asserting they will disappear if they don’t draw attention. This dangerous notion allows white-supremacist ideas to flourish unchallenged.

The ruling class deliberately encourages a passive approach, because they know that a large anti-racist, anti-fascist movement will ultimately condemn capitalism as a whole. The ruling class goes along with the violence of the far right because it aligns with their class interests. On the other hand, they denounce the resistance of workers and the oppressed that endangers their rule.

While the Democratic Party may disagree with the right wing on how to keep working-class and oppressed people in line, the two are united in their goal of doing so.

We must build an anti-racist, anti-fascist movement deeply rooted in the working class and independent of the Democrats. We must also overcome the fear, entirely understandable, of directly confronting fascists in the streets.

Lesson four: The fascists are not invincible!

The morning of Aug. 12, 2017, began with left and right forces gathering and the balance of forces still unclear. As far-right violence increased, militant, disciplined resistance pushed them back until the police were forced to intervene, preventing the rightists from holding their rally.

The seemingly all-powerful fascists scattered and fell into bickering and infighting. Those who arrived in Charlottesville to unite the various factions of their movement left divided and demoralized.

When it seemed that the right might overwhelm the left, revolutionaries played a key role by conveying confidence that we could fight back. Organization, discipline and communication boosted morale, playing a decisive role in turning the tide.

Charlottesville provided an opportunity to speak about the prevalence of white supremacy in a country founded on the genocide of Indigenous peoples and the enslavement of Africans. One could show the connections, for example, between open white supremacy and the more veiled white supremacy of a liberal politician rezoning a Black neighborhood for gentrification. Or how little difference is to be found between police lynchings and Klan lynchings.

In periods of crisis, people are more open to new ways of thinking. The opportunity to win people to revolutionary ideas is greater than ever, but revolutionaries must seize it. We must deepen our roots in the working class, encouraging working and oppressed people to defeat the fascist movement and ultimately the capitalist system itself.