What occurred on Jan. 6 at the U.S. Capitol was shocking but not surprising.

What was shocking was the sight of thousands in a majority white, neofascist terrorist mob — with no masks and no social distancing — overrunning the supposedly high security sanctuary of the offices of U.S. Congresspeople, claiming that the Nov. 3 election was stolen.

Since losing the election on Nov. 3, Trump had given a clarion call to his mass base to mobilize to come to Washington, D.C., to protest the certification of Joe Biden’s electoral victory and his becoming the next U.S. president on Jan. 20. There were numerous other attempts on Jan. 6 throughout the country where Trumpites laid siege to various statehouses.

These domestic terrorists were captured by social media smashing windows, wearing T-shirts and gear with anti-Black and anti-Semitic slogans, marching in the rotunda with fascistic flags and symbols, trashing offices and defiantly brandishing guns in the faces of Capitol police.

No doubt many of these same forces marched in Charlottesville, Va., in 2017 in retaliation of actions of left, anti-racist activists, who were tearing down Confederate and other reactionary statues especially in the Deep South.

This riot took place one day after District Attorney Michael Graveley in Kenosha, Wis., announced no criminal charges would be filed against white police officers responsible for shooting Jacob Black seven times in the back on Aug. 23. Blake, a 29-year-old Black man and father of six, remains paralyzed from the waist down. 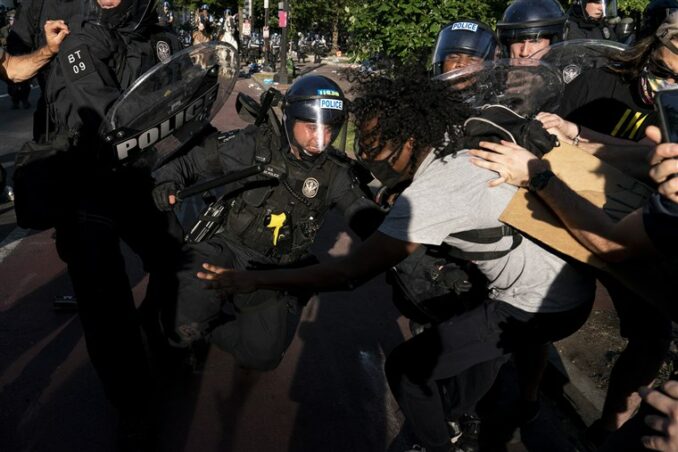 In protest of the shooting of Blake, members of the National Basketball Association — both on the men’s and the women’s teams — went on strike for three days, refusing to play during their playoffs. This led to athletes in other sports to either cancel their games or take a knee during the playing of the U.S. national anthem.

Not a surprise to many

On Jan. 6, what was obvious to millions of people in the U.S. and worldwide was the double standard of treatment displayed by police towards the white supremacists in contrast to how cops treat Black and Brown people in person and any activists defending Black Lives in the streets. This prejudiced, differential treatment is hundreds of years old, but became even more stark in the public eye following the public police lynching of 46-year-old George Floyd in Minnesota on May 25, 2020.

The police attempted to suppress — with riot gear, tasers, flailing batons, tear gas, rubber bullets and mass arrests — any protest to expose their brutality and injustice. Between May 25 and June 4, an estimated 9,300 people were arrested in direct connection to their protest of Floyd’s murder, according to the Associated Press.

On June 1, in order for Trump to take a photo op of himself holding a Bible, police and the National Guard brutally attacked peaceful Black Lives Matter protesters in Washington, D.C.

But on Jan. 6, the National Guard was placed in a holding pattern for hours and prevented from dealing with the rioting mob, until the Guard finally was called upon to help clear the streets for a 6 p.m. curfew.

Many people — including NBA athletes and coaches — commented on the connection between the Blake decision and the U.S. Capitol riot, that Black and Brown people are treated differently from white supremacists, and that this dichotomy reflects true  U.S. “democracy” by the repressive state apparatus under capitalism. Some noted that Black Lives Matter protesters would not have been allowed to come close to the U.S. Capitol, much less to force their way in.

A case in point is that in 2015, when the white supremacist Dylann Roof was arrested in Charleston, S.C., hours after murdering nine Black church members, the police had the audacity to stop to get him a hamburger.

In response to these events, all NBA teams who played on Jan. 6 either knelt during the playing of the national anthem or took a knee for seven seconds after the beginning tip-off, to bring attention to the seven shots that Blake took in the back.  There were some players, like Los Angeles Clipper Paul George, who did not want to play at all on Jan. 6.

Jaylen Brown, an outspoken Boston Celtics guard, stated, “It reminds me of what Dr. Martin Luther King has said — that there’s two split different Americas. In one America, you get killed by sleeping in your car, selling cigarettes or playing in your backyard. And then, in another America, you get to storm the Capitol and no tear gas, no massive arrests, none of that. So, I think it’s obvious: It’s 2021— I don’t think anything has changed. We want to still push for the change that we’re looking for. But as of yet, we have not seen it.” (ESPN, Jan. 6)

Golden Warriors’ forward, Draymond Green summed up his feelings this way: “To see the National Guard standing on those same steps, when there was a peaceful protest; to now see a terrorist attack and no National Guard, it just goes to show you where this country is. Nothing’s changed.” (usatoday.com, Jan. 7)

An important lesson is that neofascists are an extralegal arm of the repressive state apparatus, who raise their ugly heads in time of extreme capitalist economic crisis, now spurred on even more by the pandemic. The main scapegoat for any economic crisis are people of color.

But the Black Lives Matter movement is exemplary in showing that the more multinational the struggle against white supremacy becomes, the more firm the foundation for a broader, more militant classwide movement — that will not only organize to abolish the police but to also abolish capitalism.