Sixty Israeli teenagers signed an open letter on Jan. 5 explaining their refusal to be conscripted into the Israeli Defense Force. They were rejecting the violent occupation and destruction of Palestinian lives and land by the state of Israel. 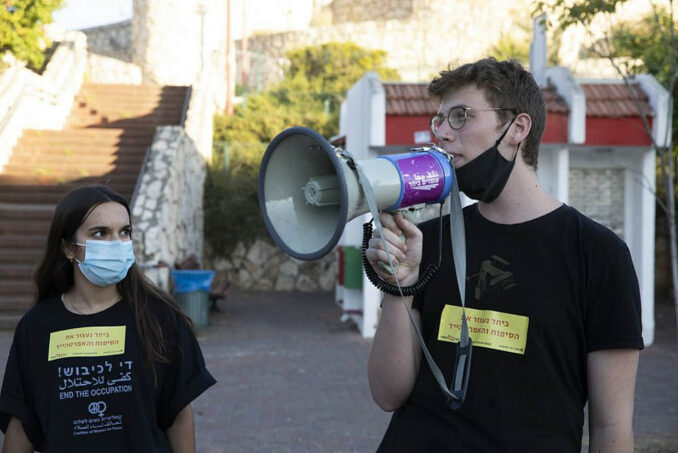 Conscientious objectors to Israeli military duty at an anti-annexation protest in the city of Rosh Ha’ayin in June 2020. Photo Credit: +972mag.com

Their solidarity comes at a cost many know they will have to pay: “Some of the signatories are expected to appear before the IDF conscientious objectors’ committee and be sent to military prison, while others have found ways to avoid army service.” (+972mag.com, Jan. 6)

“The Zionist policy of brutal violence towards and expulsion of Palestinians from their homes and lands began in 1948 and has not stopped since. The occupation is also poisoning Israeli society — it is violent, militaristic, oppressive and chauvinistic. It is our duty to oppose this destructive reality by uniting our struggles and refusing to serve these violent systems — chief among them the military.” (tinyurl.com/yyu7v6h8)

Going to the roots of oppression wielded by the Israeli state, they explain: “We are ordered to put on the bloodstained military uniform and preserve the legacy of the Nakba [violent expulsion of Palestinians] and of occupation. Israeli society has been built upon these rotten roots, and it is apparent in all facets of life: in the racism, the hateful political discourse, the police brutality and more.”

The resisters emphasize the connection between Israel’s neoliberal and military policies: “This military oppression goes hand-in-hand with economic oppression. While the citizens of the Occupied Palestinian Territories are impoverished, wealthy elites become richer at their expense. Palestinian workers are systematically exploited, and the weapons industry uses the Occupied Palestinian Territories as a testing ground and as a showcase to bolster its sales.”

Those in the imperial core of the United States could learn from the resistance of these class-conscious teens. In the U.S. as well as Israel, militant solidarity and resistance to ongoing brutality must oppose settler-colonial desecration and occupation of Indigenous land, as well as the racist domination inherent in capitalist exploitation.

The ruling class of these criminal states will turn their imperialism inward — inflicting fascist violence on their own people — before giving up the reins of exploitation. Any temporary representational gains for oppressed groups within the these empires will be made only on the backs of the most oppressed.

Solidarity forever with those who are on the side of Palestinian resistance. Free Palestine!