Jan. 10 — The events of Jan. 6 highlight the need to organize anti-fascist working-class defense, independent of the government and its two big pro-capitalist and pro-imperialist political parties. 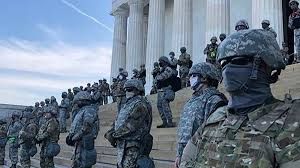 The white-supremacist Trumpite assault on the U.S. Congress attempted, through an illegal coup, to overturn what for more than 100 years had been a smooth transfer of presidential office. Media and politicians have since revealed that elements of the repressive state apparatus — especially the Capitol Police — took actions that facilitated the assault by fascist gangs.

On the surface, the Jan. 6 assault extended the electoral conflict between the Democratic Party and the Trump-led Republicans. Underneath, however, the coup attempt was a white-supremacist action to disenfranchise African American voters.

The assault threatened Black, Latinx and Indigenous participation in government at every level, such as the vote in Georgia the day before. It smelled of pogrom — of lynching.

Leading the mob were the same racist, fascist and pro-Nazi scum that marauded in Charlottesville, Va., in August 2017. In addition there were adherents of the QAnon cult and other devoted Trumpites.

The difference from Charlottesville was that Trump has incited his base with false charges of fraud since November. On Jan. 6 he, Rudy Giuliani and others agitated the mob to march on the Capitol to stop Congress from certifying the election.

Trump’s go-ahead — as he sent the mob to attack his Democratic Party enemies, and threaten every Congressmember of color and even call for the head of Vice President Mike Pence — was a dog whistle implying impunity for those actions.

Spurring on the fascists’ arrogant actions was the connivance of the Capitol cops. Every media covering the event, along with the threatened representatives, noted the absence of protection. They contrasted it to the phalanx of guards in full riot gear on the Capitol steps to confront a peaceful Black Lives Matter protest last summer.

Anyone who has organized progressive protests near Congress knows that even in a standard demonstration, the Capitol cops might be all over to arrest, handcuff and transport hundreds of people to RFK Stadium. Only 90 people have been arrested since Jan. 6, most charged with breaking curfew. Over 200 people who protested the 2017 presidential inauguration were arrested and faced years in prison for “felony riot.” Most of the bogus charges were eventually dropped.

African American Rep. Maxine Waters, concerned about the safety of Congress during the certification vote, telephoned Chief of U.S. Capitol Police Steven Sund on Dec. 31 to discuss the danger. In an interview in Los Angeles Magazine on Jan. 6, Waters said:

“The chief of police assured me that they would not even get on the plaza, let alone get in the Capitol. And I must have asked him 30 or 40 questions about how he was going to secure the Capitol, and how would he know which of these organizations would be here.

“I mentioned to him that the Proud Boys were in town, and the Oath Keepers were in town, and white supremacists were in town; and he assured me that not only did they have it under control, they were working in cooperation with the Metropolitan police of D.C. And all of that has turned out to be untrue.”

Some Capitol cops fraternized with the invading fascist mob. A few confronted the invaders, who were openly racist. According to the media, fascists killed one Capitol cop, and a cop killed a person in the mob entering a room holding the representatives.

Pentagon leaders delayed for hours deploying National Guard troops. House Majority Leader Steny Hoyer pleaded with Maryland Gov. Larry Hogan to send in the National Guard. Hogan, who ordered the mobilization, said Maj. Gen. Timothy Gowen, the adjutant general of the Maryland National Guard, was repeatedly rebuffed by the Pentagon for over three hours. Finally the Department of the Army okayed sending in the Guard.

Whether those who assaulted the Capitol — a crime under bourgeois law — and those who ordered the assault will be charged, tried and sentenced is part of an unfolding political struggle. Prosecution of the guilty, including Trump and Giuliani, requires that the Democratic Party leadership mobilize masses against a large section of the state apparatus. But Democrats fear that a legitimate mass movement will demand defunding the police, free medical care, guaranteed income, etc.

The next confrontation will come with the preparation for the Jan. 20 inauguration. This is likely to show that the state apparatus — cops, National Guard, Pentagon — is unreliable for protecting workers and oppressed people from a fascist movement.

A major lesson of Jan. 6 is that the U.S. working class and all anti-racists need their own independent defensive organizations.