Following the right-wing fascist coup attempt — Donald Trump’s version of a Nazi “putsch” — one Republican lawmaker was arrested and charged with “entering a restricted area of the U.S. Capitol.” On Jan. 8, the FBI arrested Derrick Evans — recently elected into the West Virginia House of Delegates — at his home. 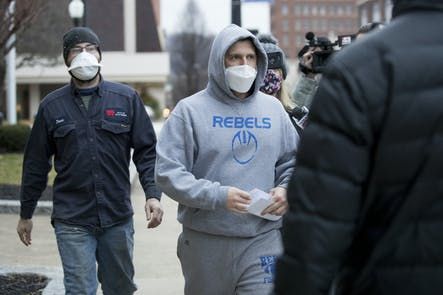 W.Va. legislator Derrick Evans, wearing a sweatshirt referencing soldiers of the racist Confederacy, after being arraigned on a federal charge, Jan. 8, in Huntington.

Evans recorded himself breaking into the Capitol with other Trump cultists. He filmed himself saying, “We’re in, we’re in. Derrick Evans is in the building,” while wearing a helmet and military style clothing. Another right-wing W.Va. state legislator, John Mandt — once forced to resign over homophobic comments, only to be elected again last November — was quick to defend his violent colleague.

According to a Facebook post made by a leader of Black Lives Matter West Virginia, at least three other W.Va. Republican legislators participated in the pro-Trump riot. The Independent of England reported six Republican state legislators from around the U.S. took part in events related to the storming.

Several other W.Va. state legislators spoke out against Evans, including African American Delegate Danielle Walker of Monongalia County, quoted in the Jan. 7 Charleston Gazette-Mail: “You showed up, and you showed out yesterday. You do not represent me. You do not speak for me, so where is my voice in all of this? Where are the consequences? Where are the arrests? Why did this person have the ability to post on social media that they were safely back on the bus, heading back to our state?” Many people throughout the state are circulating an online petition calling for Evans’ removal from the House.

Prior to being elected into the House of Delegates, Evans had a history of wreaking right-wing terror.  In 2019, Evans had a restraining order filed against him — which he violated — for harassing and threatening the lives of women at the Women’s Health Center, an abortion provider in Charleston, W.Va. (jezebel.com, Jan. 7)

After receiving scathing media attention, Evans resigned as a legislator Jan. 9. In his “resignation letter” Evans made no apologies. The fact that a violent fascist was elected into the W.Va. House of Delegates shows the reactionary character of pro-Trump voters and is an example of the illegitimacy of the capitalist system.

FBI and fascists are friends, not foes

The FBI has released a memo urging people to turn in the names and information of anyone who participated in the pro-Trump riot. It is understandable that people who are disgusted by the actions of the right-wing terrorists would want some kind of justice. And many progressive-minded people were thrilled to hear the news of Evans’ arrest.

Unfortunately, the FBI is not a friend of the oppressed or the working class and should not be trusted to carry out any kind of justice against fascists.

The FBI was created in 1908 as an outfit to disrupt and destroy movements for liberation of oppressed people and for socialism. While the FBI has a history of putting infiltrators and informants inside both Left and Right movements, the agency most often assisted the Right against the Left.

In one of the most horrific government actions in U.S. history, the FBI worked with the Chicago Police Department to assassinate Black Panther Party heroes Chairman Fred Hampton and Mark Clark, on Dec. 4, 1969. There are many other examples of how the FBI has targeted and attacked revolutionary activists.

The police and state treatment of the fascist Trump supporters differed dramatically from how those who protest racism, war and police brutality are treated. Had anti-fascist or Black Lives Matter protesters dared step onto the Capitol steps, the police would have responded with a murderous vengeance.

Now we’ve seen images of Trump rioters and police officers hanging out together during the attempted insurrection and taking “selfies,” as other protesters are damaging federal property in the background. It is clear from photos, footage and reports that the Capitol police coddled and escorted the reactionary mob onto the premises.

Leaders of the bigoted uprising are affiliated with racist, anti-Semitic hate groups such as America First, headed by right-wing internet streamer Nick Fuentes, who infamously participated in the murderous neo-Nazi march in Charlottesville, Va., in 2017. Other groups include the conspiracy-theory oriented QAnon. as well as the white-supremacist and misogynistic Proud Boys.

Prior to the coup attempt, Proud Boys leader Enrique Tarrio ordered his hooligans not to wear their signature black and gold shirts in order to avoid being identified — a code directive to prepare for nefarious action. Tarrio was arrested Jan. 4 for his involvement in tearing down and burning Black Lives Matter banners stolen from two Black churches during a right-wing protest in Washington, D.C., in December 2020.

Nicholas Ochs, leader of the Hawaiian branch of the Proud Boys, who ran as a Republican in the November 2020 elections for Hawaiian House District 22, entered the Capitol building during the riot, according to video coverage. Ochs has a personal connection to “dirty tricks” operative and Trump confidante Roger Stone, who promoted his campaign. (Honolulu Star-Advertiser, Jan. 7)

Klan and the government, hand-in-hand

America First, QAnon and the PBs all espouse the same dangerous rhetoric and serve the same purpose as the terrorist Ku Klux Klan. In his book, “The Klan and the Government: Foes or Allies?” Workers World Party founder and Chair Sam Marcy wrote: “The Klan has always been part and parcel, sometimes secretly, sometimes openly, of the capitalist state, especially in the police and military forces of the U.S.

“The KKK is a prototype of an international phenomenon. In Old Russia, they were known as the Black Hundreds. They go under different names in different countries. But everywhere they are counterrevolutionary organizations which grow up in response to the needs of the capitalist state for supplementary, illegal, extrastate and extragovernmental repression and terror.”

Only a revolutionary movement of workers and oppressed, guided by Marxist-Leninist principles, can expose, confront and smash these forces of reaction.