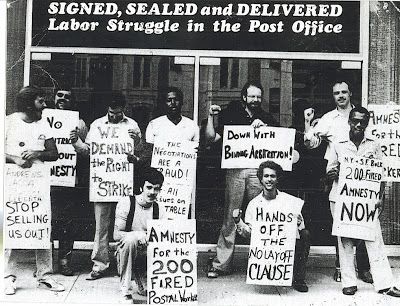 “Signed, Sealed and Delivered: Labor Struggle in the Post Office,” is a 45-minute-long film made in 1980 by Tami Gold, Dan Gordon and Erik Lewis. On December 20, postal worker activists took part in a webinar where the historic film was viewed and discussed. Below is a lightly edited review, of the film originally published in Workers World July 10, 2013.

On July 21, 1978, thousands of postal workers walked off their jobs when their contract expired, saying “no” to mandatory overtime, forced speedup and unsafe working conditions.

As a result of the wildcat strikes — one took place in Jersey City, N.J., at the New Jersey International Bulk Mail Center — 600,000 postal workers won a better contract. However, 200 workers were arbitrarily fired by postal management for “illegally” striking.

The film shows the above events and the struggle of postal workers to win back their jobs. And it follows their fight into the streets, onto the floor of the American Postal Workers National Convention and among workers and communities nationwide.

However, it took the tragic death of Michael McDermott — a 25-year-old mail  handler who worked at the N.J. Bulk Mail Center in Jersey City, who was sucked into a conveyor belt and crushed to death — to bring their hazardous working conditions to national attention.

Some points underlined by the discussion in the film are relevant to the biggest challenges facing postal workers today and to the current crisis in the U.S. Postal Service. A struggle must be waged to keep postal services public and push back privatization; the community and labor must get involved to save the Postal Service.

The film can be viewed at tinyurl.com/y9brpyo3.

Joe Hirsch is a retired mail handler who participated in the wildcat strike of 1978.