In November, voters cast their ballots in the most expensive, and hence, most thoroughly corrupted, election in U.S. history. 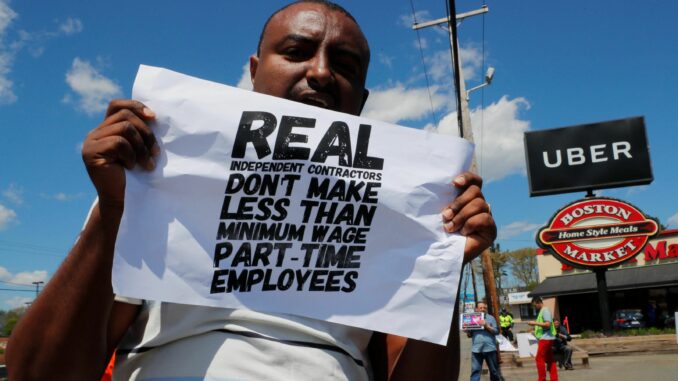 On California’s ballots were 12 direct initiatives, ranging from medical regulation to privacy statutes. In such a corrupted environment, it is unsurprising that the appearance of direct democracy did not ensure across-the-board victories for the working class. While 59% of voters passed an initiative to enfranchise formerly incarcerated people, on the other hand 60% rejected an initiative to expand subsidized housing, and 57% voted to uphold the state ban on affirmative action.

In the most expensive campaign among these 12 initiatives, and indeed all initiatives in California history, 59% of voters passed Proposition 22, an unprecedented bill that legally strips Uber, Lyft and DoorDash drivers, among others, of their status as employees of those companies. Analyzing the law, as well as following the money and tactics behind the campaign, illuminates the reasons for, and the significance of, the passage of this monumental, regressive initiative.

What will the law do?

The substance of the law consists of the reclassification of “app-based drivers” (i.e. delivery and transportation workers who are employed through an app) from “employees” to “independent contractors.” This is not a meaningless distinction. The entirety of federal labor law applies only to workers formally classified as employees. This includes minimum wage law, overtime pay, on-the-job safety protections, workers’ compensation and Affordable Care Act-mandated health insurance from large employers. As a result of this well-funded attack, all these rights are denied to workers affected by Prop. 22.

The law sets separate labor standards, which are significantly inferior to those mandated for formal employees. For instance, the effective minimum wage for cab drivers, accounting for all expenses and special provisions of the law, is $5.64, just 43% of California’s minimum wage (U.C. Berkeley Labor Center).

But perhaps the most significant consequence of the law is the denial of the right to organize unions to super-exploited so-called “contractors.” The 1935 National Labor Relations Act formally recognized the right to unionize, but only to those classified as employees. (The NLRA also denied protections to public sector workers, domestic workers and farmworkers.) Workers affected by Prop. 22 have been stripped of the legal right to unionize. If the drivers do try to unionize, they could face crackdowns by the “rideshare” bosses and/or militaristic law enforcement.

Before Prop. 22 passed, rideshare companies had already breached labor law, when they unilaterally declared workers to be contractors and treated them as such. That much should be expected under a capitalist system, where the profiteers can always afford to hire high-priced lawyers to help them circumvent the law.

Nonetheless, gig workers have noted a rapid acceleration of exploitative practices since the initiative passed. According to a DoorDash worker, the company now counts less than half of all time at work as paid work. Nominal wages declined as well, as corporations take advantage of a larger and larger army of surplus labor during the pandemic.

Legislative action to reverse Prop. 22 is practically impossible, as the initiative requires a seven-eighths majority in the California legislature to make any amendment whatsoever. There is talk of organizing gig workers despite barriers — both inside and outside California — but as of yet the efforts have been informal and limited in scope. Ultimately, it is inevitable that labor rights will continue to backslide unless direct working-class action is taken, with a broad view of the working class that includes gig workers not least.

The campaign to pass Prop. 22 received $189 million in contributions, with the overwhelming majority of these contributions coming from Lyft, DoorDash, Uber, etc. By comparison the opposition campaign, whose largest contributors were the labor unions, received $16 million — they were outspent 12-to-1 (California Secretary of State). Such a system, which allows the utter monopolization of political discourse by the ruling class, is a disgrace, subverting even a pretense of democracy.

So what propaganda tactics did these corporations use to manipulate voters?

One typical ad, produced explicitly on behalf of Lyft, gave arguments which are  grossly misleading. For example, they claimed the bill would increase pay for drivers or provide health care benefits, as if it were somehow necessary to spend tens of millions in an electoral campaign to do so.

Similarly, rideshare companies claim to have guaranteed flexible work schedules because of Prop. 22, but that is transparently not prohibited by federal labor law. (U.S. Department of Labor, “Flexible Schedules”)

In reality, the legal text allows work up to 12 hours in a 24-hour period, and even more if the driver has been logged off at least 6 consecutive hours — or the “flexibility” to work an 18-hour workday, when you need the money to make ends meet.

Most perniciously, the proposition pits sections of the working class against each other by convincing nondrivers to support lower service prices, and hence lower wages, for other workers — instead of organizing against their own exploitation.

Lyft claims 80% support for Prop. 22 among drivers. This may not be inaccurate, as corporations have been incessantly propagandizing and even threatening affected workers to tow the corporate political line. Drivers report frequent in-app pop-ups which gave misleading information on the proposition or forced them to express support.

Those drivers who expressly opposed the initiative received threatening messages and feared contract terminations, which have become increasingly commonplace. They find themselves unable to sue when companies eschew accident compensation, skirt laws or practice tip theft — as their contracts force individual arbitrations for all grievances and absolve companies of liability.

The pro-Prop. 22 campaign shamelessly appropriated and distorted the gains of genuine movements against gender and racial oppression. The legal text toothlessly addresses discrimination and sexual harassment. Meanwhile, sexual harassment claims continue to pile up, while the gig workforce — disproportionately composed of people of color — becomes increasingly precarious and is pushed to the brink by this very initiative.

Prop. 22 demonstrates beyond a doubt that the so-called “employer-employee” relationship never explained the essence of capitalism. If one digs deeper, it becomes apparent that the capitalist class profits off exploitation, regardless of how this exploitation is labeled. So long as there are capitalist private-property relations, workers must sell their labor power, and there is unequal exchange in this market. What we have fundamentally is the exploitation of the working class by the owning class — the exploitation of precarious laborers by accumulated capital.

The euphemistically termed employer-employee relationship hardly defines the exploitation by the imperialist powers of the victims of their imperialism; some $6.5 trillion worth of commodities are robbed from oppressed countries of the Global South every year. (Zak Cope, “Divided World, Divided Class”)

A king remains a king regardless of what he is named — when Augustus, the first Roman emperor, ascended to the throne, he declared himself Princeps, the “first citizen,” fearing public backlash and political instability should he have declared himself king. Likewise changing the language and terms of capitalist exploitation does not alter its essence. What we have here is a more severe, more shameless form of exploitation that paradoxically goes by a more polite name. “Contracting” is doublespeak for subjugation just as “first citizen” was doublespeak for the king.

Proposition 22 has the potential to be disastrous — not just for the drivers whom this legislation directly impacts, but for the working class as a whole. If wages, limits on hours and labor rights can all be taken away from these drivers, why could the same not happen, via “contracting,” to fast-food workers, retail workers or the remainder of transportation workers? All the hard-earned, significant concessions won by the working class, forged through centuries of struggle, are on the verge of being eliminated through a simple reclassification of workers’ legal status.

Labor rights have never been in so much peril from such seemingly innocuous and underhanded legislation. We must solidarize with the drivers as they organize, agitate and struggle — not only for the drivers themselves to be legally recognized as workers — but in solidarity with the whole working class. The ultimate goal is to overthrow capitalism itself and bring a final end to their subjugation!