Donald Outlaw became the 17th exoneree in three years in Philadelphia, when his 2000 murder conviction was overturned Dec. 28. A teenager when arrested, Outlaw served over 15 years in prison until his release in 2019. 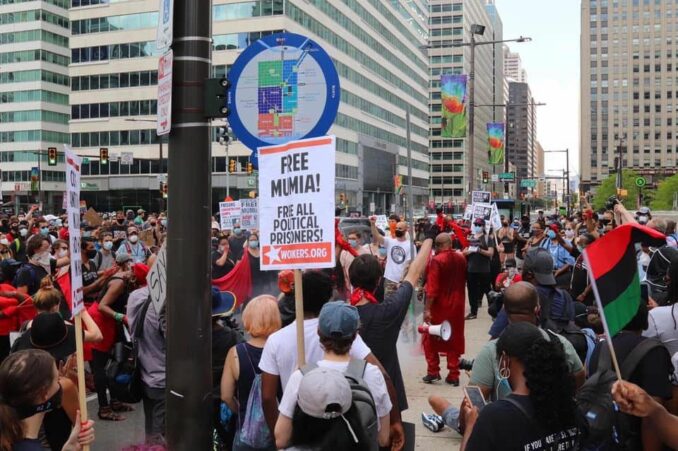 In Philadelphia, the call to free Mumia Abu-Jamal and all political prisoners is loud and clear, July 4, 2020. Credit: Tahir Asad

Outlaw’s freedom is credited to the Pennsylvania Innocence Project and the work of the Philadelphia District Attorney’s Conviction Integrity Unit, created by current District Attorney Larry Krasner when he took office in 2018.

The grounds for Outlaw’s exoneration are allegations of serious official misconduct, including witness intimidation and homicide detectives helping a witness concoct false, later recanted, testimony. Outlaw’s spouse posted flyers in the crime area and found a new witness to the murder. But the DA’s office sought to retry Outlaw, claiming that new evidence (recanted testimony) “fails to even budge the needle on the scale, weighed down by the evidence of the defendant’s guilt.” (Inquirer.com, Dec. 29, 2020)

The pattern of wrongful conviction

News of Outlaw’s exoneration was nearly overshadowed by Dec. 30 reports that Chester Hollman III was awarded $9.8 million in one of the largest wrongful-conviction settlements in Philadelphia’s history. Hollman is the third exoneree during Krasner’s tenure.

When he was 21, Hollman was charged and convicted for murder in the shooting of a University of Pennsylvania student in 1991. A judge ordered his release at age 49 in 2019, citing evidence that convicting District Attorney Lynn Abraham had withheld evidence of the likely murderer. That DA and police manipulated key witnesses to falsely identify Hollman as the shooter.

Other exonerations since 2018 have cost Philadelphia an additional $35 million in settlements. Since 1993 there have been over 50 — many stemming from claims of city police misconduct in the 1980s and ’90s.

Following the exoneration of Andrew Swainson on June 12, 2020, Assistant District Attorney Andrew Wellbrook described the case as emblematic of how the city’s criminal justice system functioned: Arrests and convictions for alleged homicides took precedence over justice. Police and prosecutors used any means to obtain those goals, including perjury, official misconduct, false or misleading forensic evidence and evidence suppression. As a result, in Philadelphia the percentage of cases considered “cleared” by arrest was between 83% and 96% — 20% higher than the national average. (Inquirer.com, June 12, 2020)

Tip of the iceberg

While Philadelphia police and prosecutors gained notoriety for their “success” rate, they were not alone in using any means necessary for convictions, often of innocent people.

In September 2020, the National Registry of Exonerations released a report on 2,400 overturned convictions across the U.S. in the last 30 years. The shocking figures revealed that 54% of cases were dismissed due to intentional or negligent mistakes by police and prosecutors. In overturned murder cases, 72% of all exonerations since 1989 involved police and/or prosecutor misconduct. Of the overturned cases, 93 involved the death sentence. (Inquirer.com, Sept. 15, 2020)

While every exoneration is a victory — a person freed, perhaps a family reunited after decades — these 17 Philadelphia exonerations are just a fraction of those fighting against unjust incarceration. Another 96 Philadelphia cases are currently under review. And the DA’s Conviction Integrity Unit has rejected around 350 cases from defendants seeking to have cases overturned.

Then there are the cases which for political reasons DA Krasner appears reluctant to fully investigate. The most glaring is Mumia Abu-Jamal’s 1982 conviction by the notoriously racist Judge Albert Sabo — from its beginning a case rife with racism, and police, judicial and prosecutorial misconduct.

Parallel between Abu-Jamal’s case and other exonerations

The exoneration of the 17 innocent defendants — after decades spent in prison — came after the exposure of ineffective counsel, false witness testimony, witness coercion and intimidation, phony ballistics evidence, prosecution failure to turn over evidence to the defense as required by law, racist jury selection and other legal errors.

These same unjust practices are glaringly evident in Abu-Jamal’s wrongful conviction and subsequent appeals of a death sentence for allegedly killing a Philadelphia police officer. But DA Krasner has maintained that he sees no evidence that challenges Abu-Jamal’s conviction. This despite Krasner “unearthing” at least six boxes of evidence from Abu-Jamal’s case in December 2018 — hidden in a nearly inaccessible storage room.

Evidence in the boxes, which Abu-Jamal’s attorneys were able to review, reveals police witness tampering, coercion of witnesses by the prosecution, including payment of a witness, and jury tampering to keep Black people off the jury.

Failure to secure evidence or actual suppression of evidence in Abu-Jamal’s case was widespread. No ballistic tests were ever taken to determine if Abu-Jamal even fired his gun, which was not a .44 weapon. The police officer involved was killed by a .44 caliber bullet.

The DA withheld evidence that the prosecutor had said he would consider reinstating the driver’s license of its key witness Robert Chobert, whose testimony was central to Abu-Jamal’s conviction. Chobert claimed his taxi was parked behind Faulkner’s police car. It is doubtful that Chobert, with a suspended license and on probation for firebombing a school, would park behind a police car.

In addition, photographs taken at the scene by an independent photographer expose Chobert’s perjury. The photos — which the state was aware of, but never entered into evidence — show no taxi parked there. When prosecutors withhold evidence from the defense that could blow holes in the prosecution’s case, they commit a “Brady Violation.” In a parallel to Abu-Jamal’s case, at least 7 of the 17 Philadelphia exonerations involved a Brady Violation.

In a final damning fact, Ronald Castille, Philadelphia DA from 1986 to 1991, oversaw several of the exonerees’ cases as well as Abu-Jamal’s Post Conviction Relief Act appeals — when he became a Pennsylvania Supreme Court Judge — a clear conflict of interest.

DA Krasner faces reelection in 2021. Many wonder if he will continue to bow to pressure to ignore the facts in Abu-Jamal’s case — or if Krasner will finally do the right thing and add Mumia Abu-Jamal to his list of exonerees.

Workers World thanks Cindy Lou, with Food Not Bombs Solidarity, for providing much of the background research for this article.