To spotlight the need for COVID-19 vaccinations of hospital workers, Stanford Medical Center in Palo Alto, Calif., staged a photo op on Dec. 18. 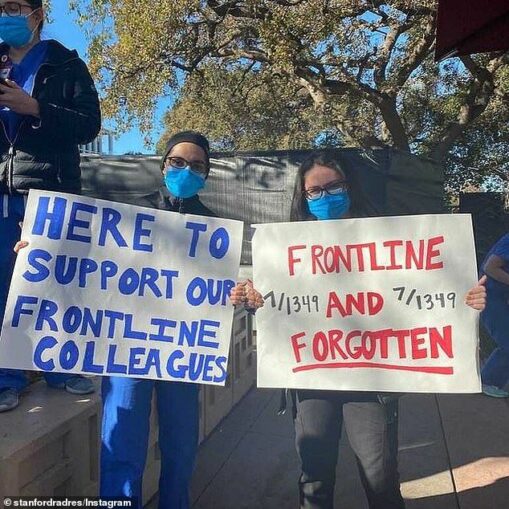 A group of medical residents created a media event of their own to protest their exclusion from the first group to be immunized. These doctors, who are finishing their medical education and serve on the front lines treating COVID infections, complained they were “First in the room, back of the line.” (NBC Bay Area, Dec. 18)

While only seven of 1,349 residents were in the first group getting the shot, other doctors who are not in close contact with COVID-19 patients, including some currently working from home, were vaccinated right away. The residents were not only protesting on their own behalf; they said nurses, janitors and food service workers should be in priority groups.

“Disparities in distribution of the vaccine can be seen at a micro-level at Stanford today,” resident Dr. Christine Santiago posted on Twitter. “I worry that the situation we see at Stanford is a harbinger of population-level inequities of vaccine distribution for our underserved communities.” (Los Angeles Times, Dec. 18)

She hit the nail on the head. Were the wrongdoings at Stanford a microcosm of problems to come in this racist capitalist society? How long will it take before Black and Latinx communities, who have already suffered disproportionate rates of infection and death, get widespread access to COVID vaccines?

The crying need for vaccines in the Global South exposed the glaring inequalities on the world stage. Countries devastated by poverty, sanctions and imperialist war and domination will face greater difficulties accessing and distributing a vaccine.

With rich people offering thousands of dollars to get to the head of the shot line, questions are being raised about how the poor and the uninsured will get access. The federal government, which is coordinating distribution to all 50 states,  promises to first vaccinate “essential workers” and people in nursing homes. But right now there are not enough doses to cover even the 20 million health care workers in the U.S., let alone grocery workers, delivery workers, teachers and others who provide necessary services while risking COVID-19 exposure.

The government should have a plan to assure all “essential workers” receive the vaccine as soon as possible. Likewise there should be no unnecessary delays in protecting the elderly, especially those in nursing homes, and people with immune system deficiencies. This could be done, similar to the mass vaccination campaign after Jonas Salk developed the polio vaccine.

There also needs to be a plan to prioritize incarcerated people. Prisons are super-spreading hotspots, with an infection rate four times that in the general population.

The government and big corporations owe the descendants of enslaved Africans billions upon billions in reparations for the unpaid labor of their ancestors. A down payment on the debt — a debt drenched in blood — could go a long way in addressing the racist disparities in health care and stem the genocidal COVID-19 death toll in communities of color.

Vaccine distribution and production overall is a chaotic mess. As of this writing [Dec. 21], the number of people vaccinated comes to less than the number of COVID-19 deaths, which continues to climb. Thanks to federal government “planning,” at least 12 states will see their ration of doses much lower than expected. There is no clear plan for how to disburse the millions of doses now being warehoused.

This is not just an example of bureaucratic ineptitude. At the core is the lack of planning and chaos inherent in the capitalist mode of production. It’s what Karl Marx called “the anarchy of production” —  anarchy meaning the absence of order.

“Operation Warp Speed” reinforced the profit motive, contracting to give billions of dollars to eight different competing drug companies. Pfizer, BioNTech, Moderna and other drug companies all stand to reap huge profits off the mass suffering caused by the pandemic — and they’re fighting each other over the spoils, rather than collaborating to manufacture the most effective vaccine in the shortest possible time frame.

The profit train doesn’t stop with Big Pharma. Walgreens and CVS will be handling much of the vaccinating, the cost to be paid by the government rather than the individuals receiving the vaccine. FedEx and UPS will score a bundle transporting the vaccines.

We are in a crisis of epic proportions. The drive for profit — which fosters inequalities — stands in the way of saving lives.