The Philadelphia Fraternal Order of Police have done everything possible to silence Mumia Abu-Jamal and bury his fight for justice. In February their obstruction even included filing a “King’s Bench” petition – which sidesteps and preempts all other judicial or appeal procedures – to attempt a change in venue for his appeals hearing. 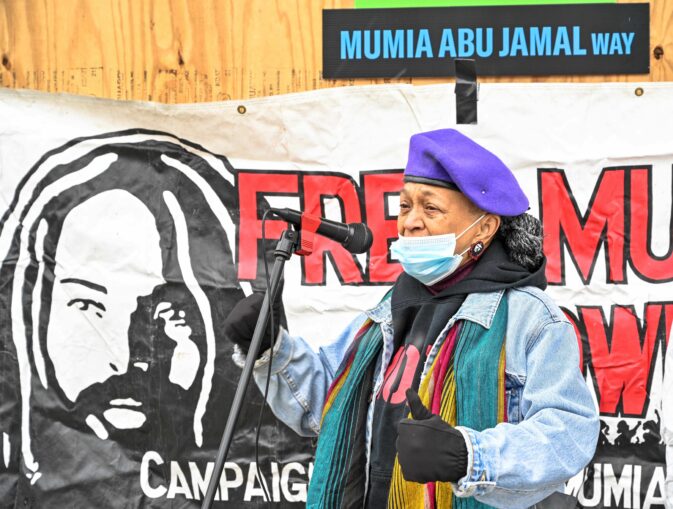 But Abu-Jamal’s global supporters, insisting on his innocence and demanding his immediate release, have other ideas.

Twice recently, a broad coalition of U.S. and international groups and individuals has succeeded in gaining major media coverage for the former Black Panther and journalist, who is Pennsylvania’s best-known political prisoner. On Nov. 16, former football star and Black Lives Matter activist Colin Kaepernick issued a statement in support of Abu-Jamal. This aired during a virtual press conference that included prison abolitionist leader Dr. Angela Davis, and other luminaries. Mainstream media, including CNN, have continued to raise Abu-Jamal’s case as a result.

On Dec. 9, on the 39th anniversary of Abu-Jamal’s unjust incarceration, supporters again caught the attention of the media with a live press conference in West Philadelphia near Malcolm X Park. There, less than two months earlier, anti-police brutality protesters clashed with Philadelphia police following the cop shooting of Walter Wallace, Jr.

The anniversary gathering also included a free food giveaway and the launch of Abu-Jamal’s newest book, “Murder Incorporated Vol. 3: Perfecting Tyranny.” Those attending were treated to free donuts and coffee as several news outlets and independent journalists covered the event, despite the bitterly cold and windy weather. (More information available at prisonradiostore.com.)

Marking the day that Abu-Jamal was shot and wrongly arrested for the murder of a Philadelphia police officer, the event was organized by a coalition that included Mobilization4Mumia, Campaign to Bring Mumia Home, International Concerned Friends & Family of Mumia Abu-Jamal, and MOVE.

Janine Africa stated: “An apology with no action behind it is meaningless. Show us a symbol of your sincerity by releasing Mumia Abu-Jamal.”