This article was originally published in Workers World in 2012. Since then, job-destroying technology is even more advanced and the eventual switch to electric vehicles could eliminate thousands of union jobs in auto. Millions are unemployed since the pandemic hit, and there is no plan or comprehensive assistance from the state to get people back to work during or after this disaster. Only worker organizing will create fairer hours, decent pay, safe working conditions and a job or adequate income for all. 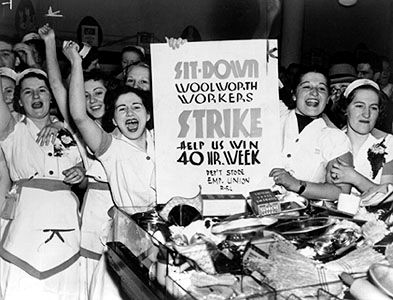 We have heard the saying, “Business and politics don’t mix.” In fact the opposite is true.

Many right-wing bills — from Michigan’s “right-to-work” bill to attacks on women, LGBTQ2S+ people, and racist “stand your ground” laws — are not even written by legislators. The actual language is provided by groups like the Koch brothers’ reactionary American Legislative Exchange Council or capitalist coalitions like the Chamber of Commerce and National Association of Manufacturers.

This is not new: The 1947 anti-union Taft Hartley Act, which made right-to-work laws possible, was actually written by NAM. For more than a century, groups like these have used their muscle to block progressive legislation like child labor laws.

A forerunner of today’s pro-1% lobbyists was a secret organization known as the Special Conference Committee. It included representatives of General Electric, General Motors, Standard Oil and other huge corporations. The SCC was founded in 1919, a year of a mass labor upsurge in steel, textile, mining and other industries and a five-day general strike in Seattle.

SCC Secretary Edward S. Cowdrick had been an executive at John D. Rockefeller’s Colorado Fuel and Iron during the 1913 Ludlow Massacre of miners and their children. When he became leader of the SCC, he was a personal employee of Rockefeller. The shadowy group held secret meetings in Cowdrick’s office in the Manhattan headquarters of Standard Oil of New Jersey.

During this time the steady introduction of new labor-saving devices had multiplied the productivity of labor. Average hours of work per week had been falling for more than a century, in part because of the hard-fought battle for the eight-hour day. The other reason was that after Henry Ford introduced the moving assembly line, the same amount of commodities could be produced in much less time. Workers were making more product than the capitalists could possibly sell.

Both Ford and Cowdrick believed an eight-hour day was good; after eight hours productivity declined, and without sufficient leisure time workers spent less money. But what some unions were raising — a six-hour day with no cut in pay — was out of the question for capitalists. That would be too big a loss of the value workers create.

Their scheme to stave off a crisis of capitalist overproduction was to get the working class, accustomed to working only for the necessary means of subsistence, to buy more things. Ford introduced the famous five-dollar-a-day wage, intended to make it possible for autoworkers to buy the vehicles they produced.

It was during the so-called Roaring Twenties that Cowdrick espoused “the economic gospel of consumption.” To counter labor’s demands for a progressively shorter work week, the advertising industry was born. At the same time credit became widely available. Manufacturing and finance capital combined to lure workers into a vicious cycle of working, spending and borrowing.

The 1929 stock market crash, followed by the Great Depression, proved that Cowdrick’s “gospel” offered no salvation from capitalist overproduction. Ford, who introduced the assembly line and the five-dollar wage, laid off a majority of his workers.

But Cowdrick and the SCC found plenty to keep themselves busy, spending the next decade lobbying against pro-worker legislation. The secret group managed to get all its members on a government advisory group, the Business Advisory Council. Cowdrick became secretary of the BAC’s Industrial Relations Council.

Cowdrick used the IRC to get President Franklin D. Roosevelt to withdraw support for the 1933 Thirty Hour Week Act, which was intended to reduce unemployment by spreading work around. The act failed in the House of Representatives by a few votes. The six-hour day is the only demand of the 1937 Flint sit-down strike that has never been realized.

The existence of the Special Conference Committee and its union-busting activities were brought to light during the hearings of Sen. Bob LaFollette’s Committee on Civil Rights (1936-40). These hearings exposed an illegal spy network built by corporations to undermine collective bargaining. Some of the worst offenders, such as GM, were members of Cowdrick’s lobbying consortium.

The SCC fell by the wayside long ago, but workers today are still suffering from the failure to win a six-hour day. In fact, hours of labor, which had been falling until the 1930s, have been gradually rising since the post-World War II period.

While 30 million or more workers are unemployed or underemployed today, many full-time workers are working overtime to get by. Better-paid union workers have been caught up in the whirlpool of work, spend, borrow, work more. Paid holiday and vacation days are declining. United Auto Workers members have had contracts foisted upon them that even undermine the eight-hour day.

Since the eight-hour day became law in 1938, the productivity of labor has grown exponentially, but instead of giving us leisure, rest and time with our loved ones, the capitalists aggressively promote a dazzling array of trinkets. Every winter we are bombarded by the message that the way to express love and appreciation is to spend all of our hard-earned dollars on expensive gifts — gifts we have less and less free time to enjoy.

The workers who produce these gifts are, more often than not, low-paid wage slaves in Asia, Africa, Latin America and the Caribbean. And the consumption of fossil fuels in the production of these commodities is a cause of worldwide calamities, from Superstorm Sandy to the melting of the polar ice caps.

The demand for a shorter work week needs to be revived as part of a program of transitional demands — one that lays bare the inherently antagonistic relationship between labor and capital and resuscitates the class struggle here in the heart of world finance capital.