Socialist Cuba embodies the spirit of international solidarity by its constant medical aid to countries around the world, especially those impacted by imperialism. This is not just an empty phrase. The true meaning of solidarity is shown every day by teams of Cuban health care workers — the doctors and nurses who have brought their skills and dedication to other Caribbean countries, Latin America, Africa, the Middle East and even to Europe. 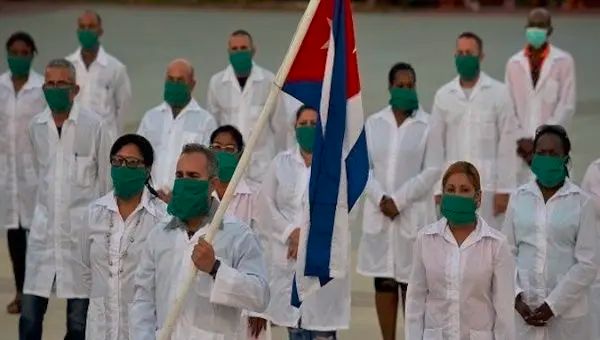 Since 1998, Cuban doctors and nurses have gone to Haiti to assist in health emergencies and after disasters.            Credit: Telesur

When governments request help in medical emergencies, this socialist country and its health care professionals are eager to provide it. Fighting diseases or aiding after disasters, whenever medical help has been needed, Cuba has quickly responded.

This remains true during the COVID pandemic. Since Cuba’s researchers have developed advanced treatments and medications to deal with the disease, Cubans are glad to share these and to send medical teams to help.

The island nation has sent 53 brigades of health workers from the Henry Reeve International Medical Brigades to over 40 countries during the global pandemic emergency, in addition to Cubans already working in 58 countries. (Granma, Nov. 23) Cuban leader Fidel Castro established the Henry Reeve Brigades in 2005 to aid victims of Hurricane Katrina in the U.S., but Cuba’s aid was rebuffed by Washington.

A milestone has been reached that deserves special recognition by supporters of both Cuba and Haiti. This December the Cuban Medical Brigade marks 22 years of providing aid to Haiti, the poorest country in the Western Hemisphere and among the most poverty-stricken nations in the world.

In 1998, when Hurricane Georges devastated Haiti, Cuba stepped up and offered medical and other assistance. The Cubans agreed to keep doctors in Haiti, for as long as necessary, and to train Haitian doctors who would return home and care for their own communities.

With Cuba’s help, improvements were made in public health and also in literacy. The Cubans particularly assisted the poorest and most remote communities with treatments, medications and health education.

When a catastrophic earthquake occurred in Haiti in 2010, 344 Cuban health workers were already working there. The Henry Reeve Brigade sent 350 more medical professionals. For the first 72 hours, it was the Cubans who provided post-earthquake emergency health care, performing surgeries and treating the injured, working alongside their Haitian comrades, before help arrived from other countries.

Last spring, after COVID-19 cases were first reported in Haiti, Cuban doctors already stationed in Haiti and ready to return home stayed to help a newly arriving delegation of 348 health workers. Haitian Minister of Health Marie Greta Roy Clement welcomed the “Cuban friends,” recalling their critical assistance after the 2010 earthquake, during a cholera epidemic brought by U.N. “peacekeepers” in October of that year, and after the deadly Hurricane Matthew in 2016. (Workers World, April 15)

Luis Olivero, Henry Reeve Brigade coordinator, said Cuban teams have “focused our efforts in fighting against the pandemic.” Even when case numbers rise, “the development of the disease is not chaotic, thanks to our Brigade’s support.” (Telesur English, Dec. 4)

A special contingent of Cuban health professionals has supported Haitian doctors in containing the viral spread. Since COVID-19 appeared, Cubans have treated the most severely ill. Elizabeth Segura, Henry Reeve Brigade vice-coordinator, explained, “This is because the Haitian people have a lot of confidence in us.”

Scores of peace, justice, medical and solidarity organizations have called for the Henry Reeve International Medical Brigade to be awarded the Nobel Peace Prize for its major contributions to the world’s people during the current pandemic.