On Nov. 27, “Black Friday,” workers rallied in front of Amazon world headquarters in Seattle to condemn Amazon’s exploitation of essential workers.  Chris Smalls and The Congress of Essential Workers (TCOEW) led the Seattle action. Smalls was fired March 30 by Amazon for leading a work stoppage in New York to protest Amazon’s failure to provide COVID protections. 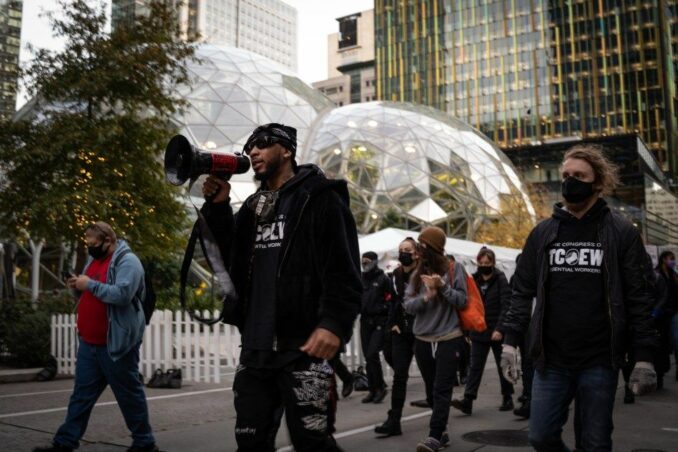 The Seattle rally and march were part of a global day of protest, with  demonstrations and work stoppages held at Amazon workplaces. These actions focused on Amazon’s neglect of essential workers laboring on 10- and 12-hour shifts, during the galloping COVID-19 pandemic. Over 20,000 Amazon frontline workers have tested positive for the coronavirus.

Amazon boss, Jeff Bezos, is now worth $204 billion, due to the sweat and blood of Amazon’s world workforce.

The demonstrators marched across Amazon’s “world campus” to the company’s giant spheres. The TCOEW and supporters will march on Amazon CEO Jeff Bezos’ mansion in the ruling class town of Medina, Wash., on Nov. 30.