As so-called essential workers fight for their rights on the job, they continue to be the most reliable fighters for COVID safety, PPE and a rational response to the pandemic. 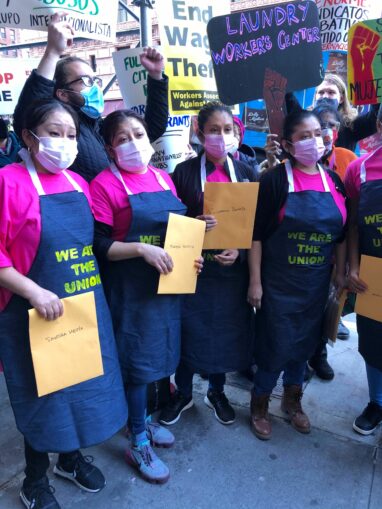 From healthcare workers in California and Washington State, to nursing home workers in Illinois, to school bus drivers in Ohio, workers are striking, fighting back and organizing while COVID numbers increase exponentially and the White House ignores the crisis.

In New York, the front lines of this fight include the ranks of laundromat workers, 95 percent of whom are women and migrants. Their fierce struggle against workplace racism and exploitation now includes demands for PPE and proper ventilation.

On Nov. 25, the International Day of the Prevention of Violence Against Women, six migrant workers organized by the Laundry Workers Center launched a union drive at the Manhattan laundromat Wash Supply.

The Workers Assembly Against Racism (WAAR) had pledged at their most recent meeting to support this campaign. Held on Nov. 21, the assembly included reports from workers active in the New York teachers’ struggle; an activist involved in a strike readiness authorization vote by CUNY teachers; an official with the Transport Workers Union; and a report on the upcoming Nov. 25 action by the Laundry Workers Center.

WAAR was formed in October, in the wake of a righteous call by trade unionists to conduct strikes and work stoppages against racism, with the purpose of expanding that call from the ranks of organized labor — about 10 percent of the workforce — to the rest of the workforce. Many unorganized workers take part in Black Lives Matter protests. WAAR activists have asked: Why not unite the anti-racist movement with the workers’ movement?

This focus includes supporting cutting-edge workers’ struggles. So on Nov. 25, WAAR sent ten of its members, many of whom have participated in the Black Lives Matter protests, to support the launch of the organizing campaign at Wash Supply, a campaign for workers’ rights as well as a fight against racism and sexism.

The laundromat is located on the upper west side — one of the most expensive places to live in New York City, the center of world capitalism.

That wealth does not translate into decent wages for laundry workers. In fact, the workers at Wash Supply, all women, face intensified exploitation. They are paid below minimum wage. They work 60 hours a week with no overtime pay, no paid sick days, and no COVID safety precautions. They work under atrocious health and safety conditions in a tiny basement with no ventilation, no heat in the winter, no emergency exits and no PPE. The workers have even been forced to buy their own toilet paper just to use their workplace bathrooms.

Even taking an hour to eat lunch is a struggle, which is why the workers used their first full lunch hour on Nov. 25 to deliver to their bosses demands for a union, better conditions and better pay.

After a raucous protest that met in a nearby playground and then marched to the front of Wash Supply, the workers, all wearing the same color T-shirts and aprons stencilled with the words WE ARE THE UNION, went into the workplace to deliver their demands to the employers. They were joined by supporters from the rally, who jammed into the tiny basement behind the workers, overflowing onto the small stairway leading down to it.

One by one, the workers approached and confronted their boss to tell them they wouldn’t accept humiliation, abuse or exposure to COVID any more. One worker said to her boss, “When I’m having lunch you come to us and tell us to stop and get back to work. We’re sick and tired of this and we don’t want to take it any more!” The supporters standing behind her and her coworkers cheered.

The turnout made it clear to the bosses that these six workers had community support. The need for this was obvious. The manager held her cell phone up while being confronted by the workers, making it clear she was videoing them. One of the main rally slogans, “The community is watching” — on signs and chanted by the protesters — let the bosses know that any retaliation for the workers demanding their rights would be met with swift fightback.

A rally announcement by Laundry Workers Center leaders served to back up that promise. Rosanna Rodriguez announced to the crowd that one of the LWC’s other campaigns — the Justice for Beatriz Campaign, at the New Giant Launder Center in Queens — resulted in victory, with the worker involved recovering stolen wages and returning to her job with better working conditions.