This article is part of Abolition for the People, a series brought to you by a partnership between Kaepernick Publishing and LEVEL, a medium publication for and about the lives of Black and Brown men.

In 1981, Black Panther Party member Mumia Abu-Jamal was sentenced to death by a “hanging judge” for the killing of a white police officer in Philadelphia. In 2000, Amnesty International found that the case “was irredeemably tainted by politics and race and failed to meet international fair trial standards.” Mumia forms part of the generation of Black radicals on whom the state tested law-and-order propaganda and lockdown in the ’60s — a prelude to the carceral repression it would deploy against poor Black and Brown urban communities in the 1980s and 1990s. On death row, Mumia became a writer of great literary power, and we are pleased to present this piece as part of Abolition for the People.

From WW:  To read Mumia’s essay in its entirety, go to tinyurl.com/y3vvz4rm

When one thinks of the term abolition, there is a tendency to see it as a threat emerging from the left. Another perspective understands, however, that abolition is a natural response to a situation that has become untenable. 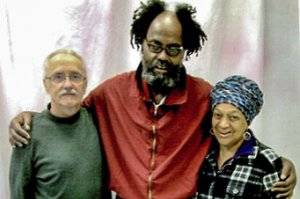 What condition lay before the nation in its founding days? Slavery: human bondage, which sat like an incubus upon the new nation’s foundation and transformed its stated aims and ideals into lies. After some reflection, perhaps, we will see that the notion of abolition has deep historical roots. Consider summer, 1776, when delegates from the Continental Congress gathered in a sweltering room in Philadelphia. These men, some of the country’s intellectual elite, were scientists, writers, doctors and thinkers, yet their claims of the new nation’s ideals were thick with contradiction. They wrote and adopted a document that said, among other things, the following:

We hold these Truths to be self-evident, that all Men are created equal, that they are endowed by their Creator with certain unalienable Rights, that among these are Life, Liberty and the Pursuit of Happiness. That to secure these Rights, Governments are instituted among Men, deriving their just Powers from the Consent of the Governed, that whenever any Form of Government becomes destructive of these Ends, it is the Right of the People to alter or abolish it.

These words emerge from the Declaration of Independence, adopted July 4, 1776, and celebrated throughout the U.S. annually on Independence Day today.

When people came together in the 19th century to oppose the expanding slave system, they were called abolitionists. Among both the rulers and the press, such people were regarded as oddballs at best, and nuts at worst. Despite present popular opinion, slavery was the air that people breathed. The nation was so deeply and openly negrophobic and racist, that the idea of a multiracial group opposed to slavery was considered aberrant.

Furthermore, the document, signed by such luminaries as Ben Franklin, Thomas Jefferson, Dr. Benjamin Rush and John Adams, included platitudes like “all men are created equal,” while dark men, propertyless white men, and all women were neither able to vote nor be voted for posts of political power. Indigenous people were seen as part of a distant wilderness and not part of the nation that was being contemplated.

In October 1859, white abolitionist leader John Brown, joined by 21 men, raided the U.S. Armory at Harpers Ferry, Virginia, in an attempt to arm African captives in neighboring plantations so they could strike out for freedom. Such an attempt had to face fierce logistical challenges, given the communications needed to gain the ear and trust of a largely illiterate and deeply repressed enslaved community, constantly subjected to white armed militia surveillance.

Abolitionists brought forth another vision, and hence, another future. Harpers Ferry, Virginia, was a step in the fateful march to war that, after earth-shaking sacrifice, led to the abolition of slavery.

Abraham Lincoln, one of the most admired presidents in history, would describe the raid and the raiders as little better than lunatics and regicides, less than a year after the attack failed. In February 1860, Lincoln spoke before a crowd at New York’s Cooper Institute (now known as Cooper Union) to distance himself and his party (Republicans) from the Harpers Ferry raid. Lincoln told his audience that Brown wasn’t a Republican and that Republicans had nothing to do with the raid. Indeed, Lincoln assured his northern audience that neither he nor his party supported abolition. And, truth be told, this is far from a remarkable perspective, for the fact of chattel slavery was one deeply normalized in American experience and history.

Indeed, abolition was the exception, not the rule.

What this means, of course, is that abolitionists were truly remarkable people who saw beyond the present into a time not yet born. Spurred often by religious convictions, abolitionists supported attacks against the slave system, which they saw as an unnecessary evil.

In 1858, a year before the Harpers Ferry raid, Lincoln opined that slavery would last for at least 100 more years — or at least until 1958 or the 1960s. It is important to note that Lincoln’s prognostication was meant to appease the slavocracy. It was not an assessment of the counterrevolutionary dynamic that would detonate after the war.

Abolitionists brought forth another vision, and hence, another future. Harpers Ferry, Virginia, was a step in the fateful march to war that, after earthshaking sacrifice, led to the abolition of slavery. Thus, abolition was not a skip in the park. It is a deep, committed movement of social transformation that seeks to bring down institutions that needlessly inflict pain upon the People.

Abolitionists like Frederick Douglass, Harriet Tubman and John Brown forged a new America, one unimaginable to earlier generations. They saw farther than their contemporaries, and even warned them of problems threatening from the periphery.

After coming close to execution twice in the 1990s, Mumia’s life was saved when a mass international movement mobilized in the streets on his behalf. In 2011, after 28 years on death row, a federal court ruled that Mumia’s death sentence had been obtained unconstitutionally; his sentence was commuted to life in prison without parole. Make no mistake: This is not enough. Freeing political prisoners is the moral assignment of every emerging generation of revolutionaries and freedom fighters. It’s time to bring Mumia — and all political prisoners — home.