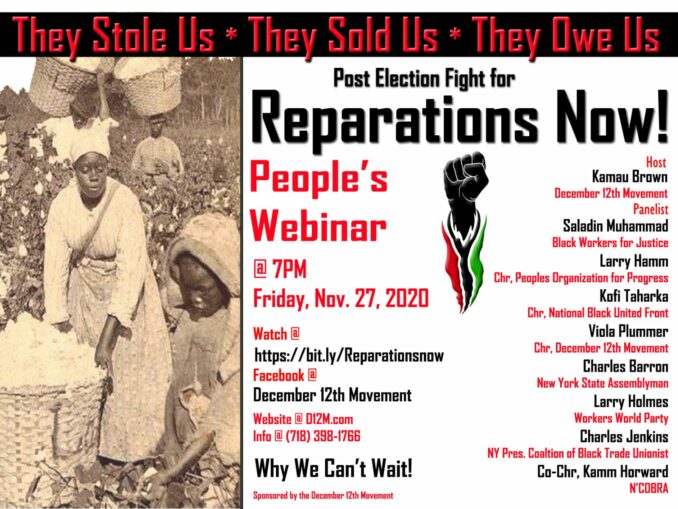 On Nov. 27, a People’s Webinar entitled, “Post Election Fight for Reparations Now!” was organized by the Brooklyn, N.Y.-based December 12th Movement to demand that President-Elect Joe Biden issue an executive order to make a down payment of at least $500 billion on the debt owed to the descendants of enslaved Africans. The panel included long-time Black leaders and activists in the political, community and labor struggles, who all extended, in their own words, solidarity for this demand.

D12 leader Omowale Clay stated in opening remarks: “The U.S. debt is as real as the crime for which it sprung, which demands acknowledgment to concrete action. Therefore, it is the urgency of now, that demands that this president use his authority to issue an executive order for this first down payment on the debt owed.

“What must we do? We must mobilize our people that Day One of Biden’s presidency is Day One of reparations right now. We are in support of all government actions that benefit and raise the quality of life of masses of people who have been devastated by the current pandemic, and victims of the corporate greed that has only exacerbated hardships and the death toll. However, the extreme devastation this pandemic has brought squarely on the conditions of the Black community will not be allowed to be brushed aside as simply our people’s pre-existing conditions.”

Go to D12 Movement’s Facebook page at tinyurl.com/y5sv7j3r to view the entire webinar.

It’s an honor to share the platform with these freedom fighters with many, many decades of experience. I had a very good conversation with brother Omowale, where he broke down their plans for moving forward with this demand that the new administration issue an executive order as part of a down payment on reparations, that they set up various programs mostly to deal with health care, state-of-the-art hospitals in Black communities, programs to train doctors and health workers. And that should be done immediately.

I think [this demand] will interest and excite many forces, including many in the Black Lives Matter movement. We all know how important they are and the force they played in the Intifada against police terror over the past six months. It’s a good project. It also says that we’re not going to have some “honeymoon period” for the Biden administration. And as a matter of both principle and practice, we should not have this “honeymoon period.”

Biden is a loyal servant of capital. He’s a white supremacist, maybe not the most infamous one, but he’s there. He has always been comfortable with white supremacists.  [He has been] infamous for being against even affirmative action programs. It’s a good time to put forward a strong, popular way of raising and popularizing reparations.

About two months ago, more than 40 unions representing millions of workers issued a statement calling for work stoppages against racism. That’s important. [This was] also out of concern that Trump might try to hold on to power with a coup. Even some of the unions are talking about a general strike. Whether we’re excited about the general strike to save what they call democracy, which we know as something being phony, is another argument. But the mere fact that they’re talking about having a general strike about anything, for those of us who have any experience with the organized labor movement, that’s a big step forward.

And some of them are even trying to extend that call for a general strike to demanding COVID relief. So there are lots of good things happening, things that from the point of view of labor give the rank-and-file workers something to organize around and push back the conservative top leadership of the organized labor movement.

So I hope that this demand to Biden for a down payment on reparations will be one of a number of foundations, one of a number of bases for a new wave of struggle right off the bat in 2021. Let’s not do what some of us — not all of us — did when Obama got in and we gave him a honeymoon. And I think we paid for that.