A claim was filed in U.S. District Court here on Nov. 1 charging that disabled people are being denied their right to protest against “systemic racism” by local, state, and federal police agencies. The claim cites Section 504 of the Americans with Disabilities Act (ADA). 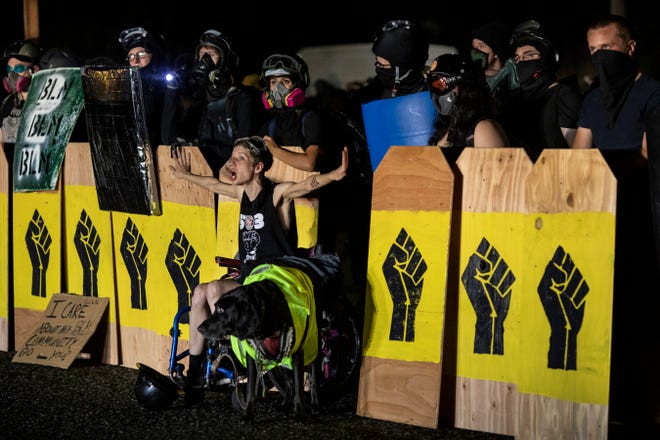 Joining in the claim were four disabled Black Lives Matter activists of Portland; the Civil Rights Education and Enforcement Center of Los Angeles; and the Disability Rights Legal Center of Denver. Specifically, it cites protests against police “killings of George Floyd, Breonna Taylor, and many other Black, Indigenous, or people of color.” (tinyurl.com/y26dz944, pp. 1-3)

The plaintiffs include Juniper Simonis, “a non-binary transgender individual with PTSD,” Katalina (Katie) Durden, “who is legally blind,” Melissa Lewis, “a person with photosensitive epilepsy and Ehlers-Danlos Syndrome, a connective tissue disorder, which means she cannot run or move quickly,” and Philip Wolfe, who “has been deaf since birth and communicates through American Sign Language (ASL).”  (tinyurl.com/y3kx53ur)

Their disabilities, if not visible, were told to police verbally. Nevertheless, these four and thousands of others were corralled, pushed to the ground by gangs of cops, beaten with nightsticks and fists, tear-gassed, flash-bombed, and shot at with plastic bullets.

In addition, plaintiff Simonis was arrested for trying to take their service dog back from a cop, while police-operated strobe lights caused plaintiff Lewis to have an epileptic seizure during a protest.

Their legal complaint declares that in attempts by police at all levels to unlawfully disperse or corral protesters, disabled persons’ rights were specifically denied, as they were forced, along with others, into traps by gangs of cops in body armor, wielding clubs and gloved fists. The police beat them to the ground, teargassed their faces at close range, and then arrested them on wholly trumped-up charges.

Mobs of police terrorize entire residential neighborhoods with clouds of noxious gasses, discharge flashbang and pepper grenades. They fire rubber bullets at protesters, one of whom was shot in the face as police used U.S. military-provided grenade launchers, automatic assault rifles, and handguns.

The complaint also notes that at these protests police target people with disabilities and, when disabled activists demand their rights as police beat, tear gas, and arrest them, the cops tell them they “should not attend protests at all,” a direct violation of Section 504 of the ADA.