On Nov. 9 Shone Trawick became the third person to die in Cleveland’s Cuyahoga County Jail this year and the 12th jail death since June 2018. Trawick is the first casualty to be blamed on violence by another prisoner. Those in nearby cells reportedly screamed for help on hearing the assault. 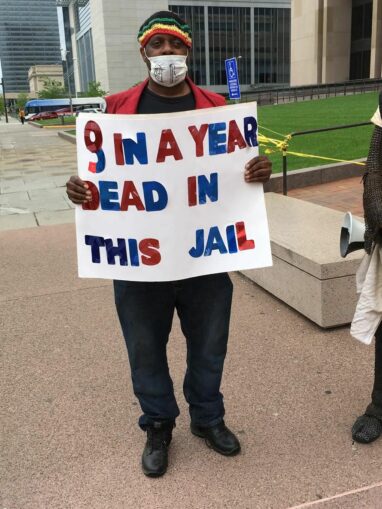 Demonstrators gather outside the Cuyahoga County Jail, May 29. Since the protest, three more people have died in the jail. WW photo: Martha Grevatt

Preventable deaths were previously attributed to overdose, suicide and inadequate medical care. Lea Rayshon Daye, a 28-year-old Black trans woman, died last August in her cell. Michael Wormick died in July. Both were homeless at the time of their arrest.

Daye had written a letter, found in her cell by her mother, intended to expose human right violations including inedible and inadequate food and substandard medical care.

Beatings by guards — not by other incarcerated people — have led to multiple lawsuits. The same week that Trawick’s death was reported, Jasper Muldrow Jr. sued the county over the 2018 traumatic beating of his mentally ill son, Jasper Muldrow III. The jail officer, Charles Enoch, who instigated the assault, was recently sentenced to a year probation with no jail time. Four other guards who joined Enoch in attacking Muldrow have not been charged.

The jail’s scandalous conditions and high rate of deaths led to the formation of the Coalition to Stop the Inhumanity at the Cuyahoga County Jail in December 2018. Regular protests have taken place outside the downtown jail for almost two years. The Coalition joined LGBTQ+ and homeless advocates in a joint online press conference (covered by Workers World) after Daye’s death.

What drew media national attention to the county jail, however, was not the deplorable conditions. It was the widely-hailed decision to shrink the jail population to limit COVID-19 spread. But many prisoners were then transferred to state prisons that were COVID hotspots. Now the county jail population, previously subjected to massive overcrowding that intensified spread of the virus, is again nearing capacity.

It is possible that jail authorities will use Trawick’s tragic death to impose collective punishment — such as lockdowns and harsher restrictions — on all 1,500 people now housed at the county jail.

Everything happening at the Cuyahoga County Jail is another argument for prison abolition and another reason to “free them all.”