About 75 demonstrators rallied at Marietta Square on Nov. 14, demanding justice for 17-year-old Vincent Truitt, a Black teenager who had been killed by Cobb County Police. He was shot twice in the back by an unidentified police officer on July 13, as he ran away from the officer near Six Flags water park in Marietta, Ga. Truitt died from his injuries the next day, alone. His family hadn’t been notified he was shot and then hospitalized.

The protest was held by Truitt’s family, friends, teachers, advisers and other administrators from his charter school, Kipp Atlanta Collegiate (KAC).  At the rally, speakers said there is dashcam footage of the officer shooting Truitt and not rendering CPR after killing him. Truitt’s family, along with their supporters, are calling on Cobb Police Chief Tim Cox to release the footage to the public. 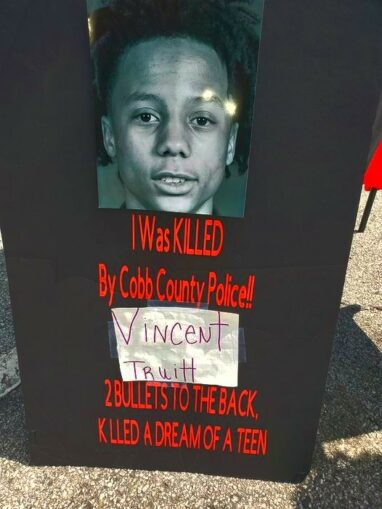 The Cobb Police Department is refusing to release any information to the public about the officer who killed Truitt, who protesters say is still employed.

Only Truitt’s family and their attorney, Gerald Griggs, as well as District Attorney Joyette Holmes, her office staff, and law enforcement officials have been shown this footage. Griggs said that Truitt’s family still has not received sufficient answers from Cobb County in the four months since he was killed.

Truitt’s parents also spoke at the rally.  His father, Andre Truitt, said that he saw the video of his son, while running away, being shot twice in the back by Cobb County police. He asked, “In what world is that humane?”

Venethia Cook-Lewis, Truitt’s mother, tearfully said she never imagined she would be in this situation: “It’s not fair we have to go through this pain while [the officer] lives his life.  He should not be working on this force.” She said that the video of her son’s murder showed the officer who killed him was asked to help with CPR, but instead just stood over him, not offering any help.

Cook-Lewis stated,  “I had Vince at a young age. We grew together and we learned together. He was almost at the age where I could be more of a friend than a mom. He was just starting to live his life.” Her son would never have hurt anyone, she said, let alone a police officer, and said living without her son hurts terribly.

Cook-Lewis emphasized: “Tim Cox, it’s time for you to resign! This officer should not be working after shooting a kid in the back. Not once, but twice. Justice for Vince!”

Authur Washington, an assistant principal at KAC, said Truitt’s family has been calmly asking for the tapes, and the Cobb Board of Commissioners tells the relatives to be patient, but its members are being hypocritical. He said: “They’re not giving us what they want us to give them. They want us to give an unidentified person just cause, but it was a shame that Vincent didn’t make it home.”

‘Truitt full of life and love’

Washington explained the rally’s purpose was to paint a bigger picture of Truitt’s life, as the picture the Cobb police have put out is inadequate for a young man who was full of life and love. Classmates described Truitt as a teen who loved to play basketball, and emphasized they wanted Truitt’s case to be recognized nationally.

Jondré Pryor, principal of KAC, said that at their first meeting Truitt had questioned who Pryor was. As time went by, Truitt smiled and hugged Pryor.

Pryor said: “I am sick and tired of the adultification of our Black and Brown babies. Media makes them out to be grown women and grown men. Vince was a kid, he was a teenager. He did those things that teenagers do. But in the media, they portray him as this older person, this man, who was threatening the Cobb County officer. I’m just sick of this adultification. Vincent was a wonderful child, he had passion, he had energy. We have to make sure we find justice for this warrior.”

Toward the end of the rally, attorney Griggs returned to speak.  He said the family of Ahmaud Arbery sent their condolences to Truitt’s family and friends. (Arbery, a 25-year-old unarmed Black man, was murdered by white vigilantes near Brunswick, Ga., in February.)

Griggs described the contents of the tape of Truitt’s killing: He was a passenger in the vehicle he was accused of stealing. The Cobb County police chased the vehicle down. The police eventually hit the car to slow it down. The car stopped, but then started again and drove farther, near a warehouse. Dashcam footage showed the driver of the car exiting the vehicle. The police officer got out of his vehicle and switched to his body camera. Truitt eventually crawled from the passenger seat into the driver’s seat and exited the vehicle.