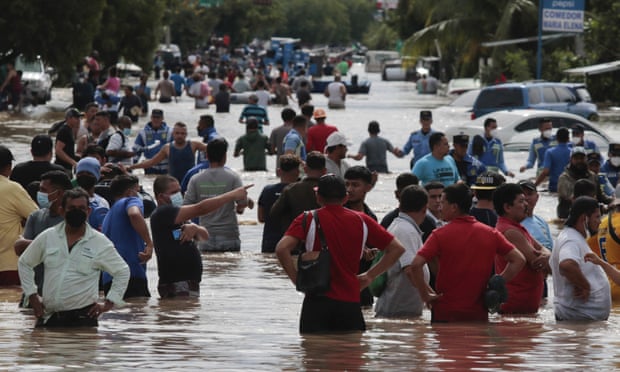 People in Honduras deluged after 2020 hurricanes.

Nov. 16 — The storms battering the north and northwest coast of Alaska and the hurricanes rampaging through the Caribbean and southeastern North America may or may not be produced by human-generated global warming. Scientists differ on this question.

But scientists and people trying to survive these storms do agree that they are becoming more intense and more dangerous, particularly to the Indigenous people and workers living in their paths, who often do not have the money to move out of the way or weatherproof their homes.

How close are we to the tipping point when human intervention can no longer interrupt the climatic feedback loops and when global climate change cannot be reversed, halted or even slowed?

Hurricanes in the Caribbean

There have been 30 named storms as of Nov. 15 in the current season, surpassing the record 28 major storms in 2005.

The character of the 2020 hurricanes has also changed. The winds are more intense; gusts last longer, and the speed is higher. This means winds now destroy more roofs, topple more trees and power pylons and damage more houses and other buildings. Since warm air carries more moisture, the 2020 hurricanes dropped more rain.

The hurricanes also moved significantly slower, and, surprisingly, some grew in intensity over 24 hours, increasing their wind speed by as much as 70 miles per hour, according to Kerry Emanuel, a meteorologist at the Massachusetts Institute of Technology. “It’s a forecaster’s nightmare,” Dr. Emanuel told the New York Times Nov. 3. Hurricanes going from Category 1 to Category 4 in 24 hours are especially dangerous.

Hurricane Eta hit Nicaragua Nov. 3 as a Category 4, before slamming into Honduras and Guatemala. Some 120 people died and 113 are still missing, with 210,000 evacuated from their homes. Communities living along the Caribbean coast, particularly the Indigenous Miskito and Garifuna peoples, have been devastated by mudslides, floods (Eta dropped over 25 inches of rain) and high winds. Some of the missing are feared to be entombed in the mud.

A new storm, Hurricane Iota, is threatening to come ashore in the very same area of Central America as a monster Category 4.

The pandemic, in addition to the threat of Hurricane Iota, is making recovery very difficult. The Red Cross is handing out hand sanitizer and masks, but with hundreds of thousands of people crowding into mass shelters and living under bridges and abutments, the sanitary situation is not good.

The Honduran government estimates that over a billion dollars will be needed — money it doesn’t have — to recover.  The U.S. Agency for International Development has donated $100,000. (Guardian, Nov. 3)

Storms in the Arctic 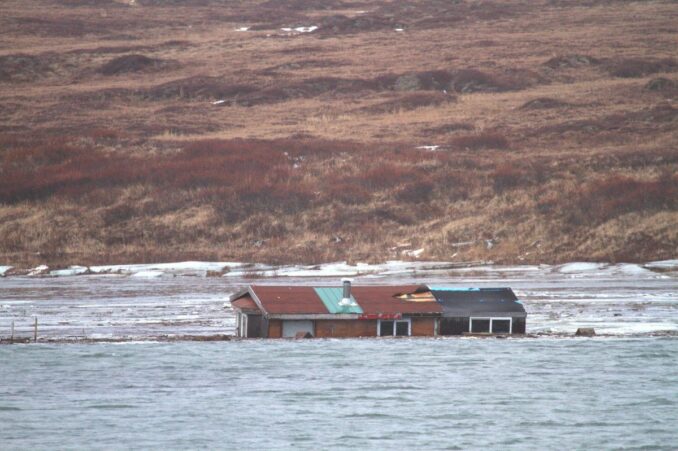 A home in Nome, Alaska, underwater after 2020 melting of ice covering on sea and shore.

When one of these writers first went to work in the Arctic a dozen years ago, the Arctic Ocean in July could have been mistaken for a large lake. No waves lapped the beach, and the waters were calm as far as you could see. On the horizon was a line of something that looked like the opposite shore but was actually the edge of the ice. The height of waves in the Beaufort Sea, the eastern part of the Arctic Ocean, could not even be measured then because ice covered most of it all summer.

At least 2,000 years ago, peoples settled on the Arctic coast on both sides of the Bering Strait to be near the seals, fish, walrus and whales on which they depended. Once they began hunting the huge bowhead whales, their communities were able to support several hundred people. Whale hunting requires enough people to hunt and process these large mammals, which in turn provides enough food to support the communities through much of the year.

But the climate in the Arctic is rapidly changing, even more quickly than elsewhere. The temperature is generally estimated to be increasing at two or three times the rate of the temperate zones.

In spring 2020, temperatures in Siberia hit the record high of 100 degrees Fahrenheit. Massive fires followed, burning vast areas of forest and peat land and releasing enormous quantities of CO2 and methane, potent greenhouse gases. (tinyurl.com/yxsp44ut) The heat events, along with record low multiyear sea-ice cover this year coming after several years of ice at historic minimums, indicate substantial warming across the region. The trend is ominous.

Due to the rapid loss of the protective ice cover of the ocean and the late formation of the annual shore-fast ice, Arctic coastal communities have become vulnerable to increasingly violent autumn storms that lash the coastal strips along which these communities are built. Now each fall, huge waves, fierce winds and storm surges tear away ever larger sections of coast, flooding and knocking down homes, roads, and other vital village infrastructure.

Some 30 communities, many very old, are facing relocating due to changing climate, moving inland to be farther from the coast — and farther from their livelihood and  cultural ways of life. And now this climate catastrophe is taking place within a pandemic that is hitting Native communities four to five times harder then non-Native Alaskans.