Why did nearly 73 million people vote for Trump, given his disastrous pandemic response and the economic collapse?

The answer, simply put, is racism. In a country built on white supremacy, from slavery and genocide to mass incarceration and imperialist war, it should come as no surprise that a substantial portion of the population would back a candidate openly espousing white supremacist views. 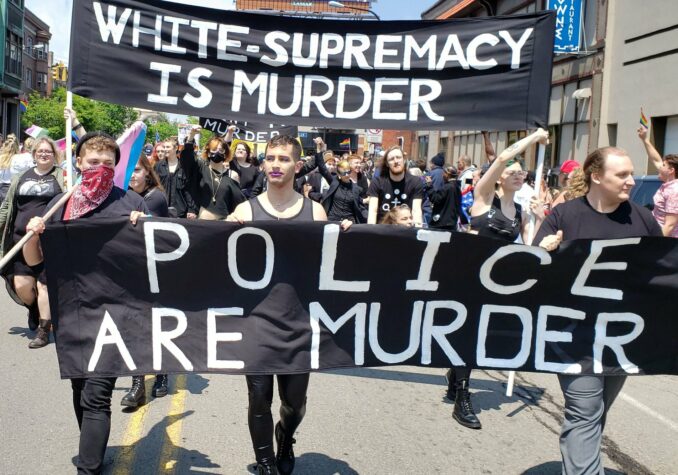 Trump’s voters were overwhelmingly white. They cut across class lines, coming from the ruling class, the petty-bourgeoisie and the working class. Trump was the near unanimous choice among the police, Border Patrol and so forth.

There were exceptions. Among all voters, including white voters, the majority of the LGBTQ2S+ vote went to the Biden/Harris ticket, for example. (NBC, Oct. 1) But even among white union members, a significant number backed Trump.

It is easy to see why a sector of the ruling class would support Trump. Same for the cops, and for the petty-bourgeoisie, historically the base for far-right movements. Why so many white workers supported Trump, given his openly anti-working class program, is a more complex question.

Support for white supremacy among white workers is not a new phenomenon in the U.S. This support has two primary sources: one material and one ideological.

On the other hand, they are still exploited as workers, with surplus value extracted from their labor by the ruling class, though to a lesser degree than from oppressed workers. This means a commitment to white supremacy actually facilitates their own exploitation by limiting the possibility of a united struggle – crucially, with oppressed workers in the leading role – against the ruling class. So there is a contradiction between two aspects of their identity: the “white” aspect aligning them with the white ruling class, and the “worker” aspect aligning them with workers of color.

In addition to the material contradiction, there is the ideological factor. As Karl Marx put it: “The ideas of the ruling class are in every epoch the ruling ideas.” This has never been more true than in the age of 24-hour news, consumer culture and social media. We live inside the most expansive propaganda machine ever devised, one that indoctrinates us with the ideas of the ruling class. The ruling class uses this machine to ensure a majority of white workers identify more as white than as workers.

The ideological arena is not completely under ruling class control. The struggle of working and oppressed people can have enormous influence. Consider this summer’s rebellions following the racist police lynching of George Floyd. A Pew Research Center study found that 67 percent of U.S. adults supported the Black Lives Matter movement this past June. But, by September, support had dropped to 55 percent. In June a surprising 37 percent of white Republicans supported BLM, but in September less than half that, only 16 percent. (tinyurl.com/y42xf7mm)

This leads to the peculiar conclusion that millions of white workers, even Republicans who cast ballots for arch white supremacist Trump, had voiced support for an anti-racist movement just months before. What could account for such an enormous contradiction? The anti-racist struggle!

In June the rebellions were at their height, but by September they had tapered off amidst growing attacks against them, emanating from both Republicans and Democrats. At their peak, the rebellions affected the consciousness of millions of people in the U.S. Imagine if the organization of working and oppressed people had been sufficient to sustain and expand the rebellions indefinitely!

The other ruling class party, the Democrats, has abandoned almost any pretense of defending the interests of working people. This strengthens white supremacy by giving more space for the most reactionary ideas to prosper. Make no mistake: Biden also is a white supremacist. Biden’s list of racist policies includes the 1994 Crime Bill, destroying welfare in 1996, organizing imperialist coups in Honduras and Libya, and backing millions of deportations while vice president under Barack Obama.

If the Democratic Party pays lip service to progressive ideas, it is a disingenuous maneuver to capture and defang people’s movements. The post-election hostility mobilized against social democrats like Alexandria Ocasio-Cortez and Bernie Sanders makes this clear.

The leadership of organized labor, by tying itself to the Democratic Party and rejecting independent working class action, has not seriously challenged white supremacy. This holds back the power of the rank and file, based at the point of production, to push back against racism.

However, last summer numerous unions issued a statement calling for workers’ action against racism. (laborforblacklives.org) This is a major positive development. Now the call to action must advance to actual action.

Examining the material and ideological basis for white workers’ racism explains the strength of Trump’s support, and also raises questions of revolutionary strategy: Can white workers develop revolutionary consciousness, or are they hopelessly racist and reactionary? Does the white aspect of their identity inevitably dominate the worker aspect? Again, let’s look to this summer’s rebellions.

Oppressed nations within the U.S. have risen up countless times against the police. But one aspect distinguishes the 2020 rebellions from all earlier ones: the participation of millions of white youth, following the leadership of the oppressed.

This radical development is the result of the decline of U.S. imperialism. The crumbs with which the ruling class buys off white workers are procured from the labor of super-exploited oppressed workers, both inside the U.S. and around the world. As the crisis of an unsustainable capitalist system deepens, it is increasingly unable to provide those crumbs.

This produces two contradictory responses among white workers. Some, anxious over their loss of privilege compared to oppressed workers, gravitate to racist, anti-migrant fascist positions. Others, seeing a future more similar to that of oppressed workers, move towards solidarity with the most oppressed. The decline of U.S. imperialism creates greater reaction, and at the same time, a greater materialist basis of solidarity.

Dare to struggle, dare to win!

An honest assessment of the consciousness of white workers can be demoralizing, to put it lightly. But we would do well to look to this past summer for a hint of what is possible. And we should remember that countries as vast and riven with contradictions among the people as the Russian Empire and feudal China were able to build revolutionary unity and overthrow their oppressing classes.

So let us march forward, equipped with revolutionary optimism to face the challenges before us.