During a virtual press conference Nov. 16 on the critical juncture in the fight to free political prisoner Mumia Abu-Jamal, Colin Kaepernick expressed his support. Kaepernick sacrificed his stellar athletic career in 2016 when he began to take a knee in protest against police terror during the playing of the U.S. national anthem at National Football League games. Following is his statement, which can be heard at https://youtu.be/To62En75n8I. 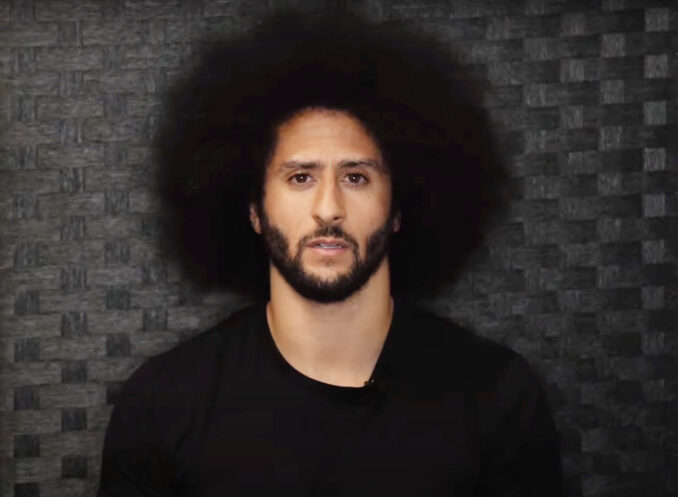 When I was invited to speak on behalf of Mumia, one of the first things that came to mind is how long he’s been in prison, how many years of his life have been stolen away from him, his community, and his loved ones. He has been incarcerated for 38 years. Mumia has been in prison longer than I’ve been alive. When I first spoke with Mumia on the phone, I did very little talking. I just listened.

Hearing him speak was a reminder of why we must continue to fight.

Earlier this year the United Nations Human Rights Office of the High Commissioner issued a statement noting that “Prolonged solitary confinement, the precise type often used in the United States, amounts to psychological torture.” Mumia Abu-Jamal has spent roughly 30 out of his 38 years in solitary confinement.

He had no record before he was arrested and framed for the death of a Philadelphia police officer. Since 1981, Mumia has maintained his innocence. His story has not changed.

Mumia was shot, brutalized, arrested, and chained to a hospital bed. The first police officer assigned to him wrote in the report that “the Negro male made no comment,” as cited in Philly Mag. Yet 64 days into the investigation, another officer testified that Mumia had confessed to the killing. Mumia’s story has not changed.

But we are talking about the same Philadelphia police department whose behavior “shocks the conscience,” according to a 1979 Department of Justice report — behaviors like shooting non-violent suspects, abusing handcuffed prisoners, and tampering with evidence. It should therefore come as little surprise that, according to Dr. Johanna Fernandez, over one third of the 35 officers involved in Mumia’s case were subsequently convicted of rank corruption, extortion, and tampering with evidence to obtain convictions in unrelated cases.

This is the same Philadelphia police department where officers ran racial profiling sweeps — like “Operation Cold Turkey” in March 1985, targeting Black and Brown folks — and bombed the MOVE house in May of that year, killing 11 people, including five children, and destroying 61 homes.

The same Philadelphia police department whose officers, eight days before the 2020 presidential election, shot Walter Wallace Jr. dead in the streets in front of his crying mother.

The Philadelphia Fraternal Order of Police has unrelentingly campaigned for Mumia’s execution. During their August 1999 national meeting, a spokesperson for the organization stated that they “will not rest until Abu-Jamal burns in hell.” The former Philadelphia president of the Fraternal Order of Police, Richard Costello, went as far as to say that if you disagree with their views on Mumia, “you can join him in the electric chair” and that they will make it an “electric couch.”

The trial judge on Mumia’s case in 1981, Alfred Sabo, was a former member of the Fraternal Order of Police. Court reporter Terry Maurer-Carter overheard Judge Sabo telling a colleague, “I’m gonna help them fry the n*****.”

Found in December 2018, in an inaccessible storage room of the District Attorney’s office, six boxes of documents for Mumia’s case revealed previously undisclosed and highly significant evidence showing that Mumia’s trial was tainted by a failure to disclose material evidence in violation of the United States and Pennsylvania constitutions.

In November 2019, the Fraternal Order of Police filed a King’s Bench petition asking the court to allow the state attorney general, not the Philadelphia DA’s office, to handle the upcoming appeals. As the FOP president John McNesby said just last year, “Mumia should remain in prison for the rest of his life.” And a King’s Bench order provides the legal angle for the Commonwealth of Pennsylvania to uphold Judge Sabo’s original wish — which was for Mumia ultimately to die in prison.

Today we are living through a moment where it’s acceptable to paint “End Racism Now” in front of the the Philadelphia Police Department’s 26th District Headquarters. And yet a political prisoner, who has since the age of 14 dedicated his life to fighting against racism, continues to be caged and lives his life on a slow death row.

We’re in the midst of a movement that says Black Lives Matter. And if that’s truly the case, then it means that Mumia’s life and legacy must matter. And the causes that he sacrificed his life and freedom for must matter as well.

Through all of the torture Mumia has suffered over the last 38 years, his principles have never wavered. These principles have manifested themselves in his writing countless books while incarcerated, in his successful radio show, in the time and energy he has poured into his mentorship of younger incarcerated folks, and the continued concern with the people suffering outside of the walls.

Even when living in the hells of the prison system, Mumia still fights for our human rights. We must continue to fight for him and his human rights.

Mumia is 66 years old. He is a grandfather. He is an elder with ailments. He is a human being who deserves to be free.