Black-led marches against racist and economic oppression continued during election week in Seattle. Trump’s racism has led more people to stay in the streets. While the vote for Biden was big, the election definitely didn’t take people out of the streets. 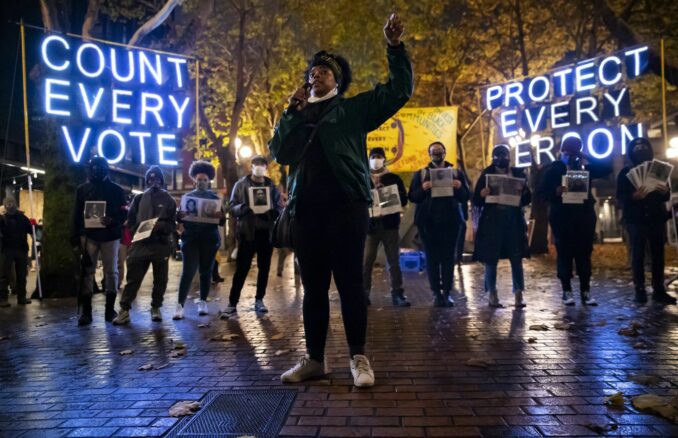 The marches continued to press the five basic demands of the local Black Lives Matter movement: “Defund the Seattle police department – by 50% at least!” “Invest in the Black community!” “Free all the protesters!” “No new youth jail!” and “Mayor Durkan, you resign!”

On Nov. 4, mainly Black demonstrators marched past the East Precinct on Capitol Hill, carrying Black Lives Matter signs. The cops attacked.  Seven were arrested for standing up against racist attacks on their community.  Kel Murphy-Duford, a Black trans man, was grabbed by cops. They slammed him to the ground and “his head hit the pavement,” according to his lawyer, Karen Koeler. This was witnessed by demonstrators and even recorded on police body cameras.

Public officials and the cops have been extremely vague about Murphy-Duford’s medical condition. On the evening of Nov. 5, Karen Koeler reported he was “still intubated and unconscious” in the hospital. Murphy-Duford has been active in the LGBTQ2S+ community and has been a regular at anti-racist protests since June.

On Nov. 5 a large rally was held in Occidental Park for Black lives and to “Count every vote – Protect every person!”  A Native Duwamish man from the First People of Seattle spoke and sang a drum song. Palmira Figueroa spoke from the Washington Immigrant Solidarity Network. A Black undocumented activist reminded the crowd that Joe Biden was a member of an administration that deported 4 million people between 2009 and 2017.

There were speakers from the Washington State Labor Council, representing 550,000 workers, and the Washington state Poor Peoples Campaign. The famous “Katie,” organizer of the daily Morning March, also spoke. People heard from the Black Action Coalition, which then led the 400-person crowd on a march through downtown.

The following night the Black Action Coalition led demonstrators on an evening march to the massive construction site of a new youth jail. The march was guarded by volunteer car brigades in both the front and the rear, and bike brigades along the sides – a common security set-up. Marchers sat down and blocked the street for over an hour while a peoples assembly was held in front of the jail. People of color spoke bitterness and exposed the racist torture and loss of youth they endured in the so-called “Youth Service Center.”

In Seattle, Black Lives Matter protesters have marched for over 150 days and provided energy and leadership for the overall struggle of the working class. The struggle continues.