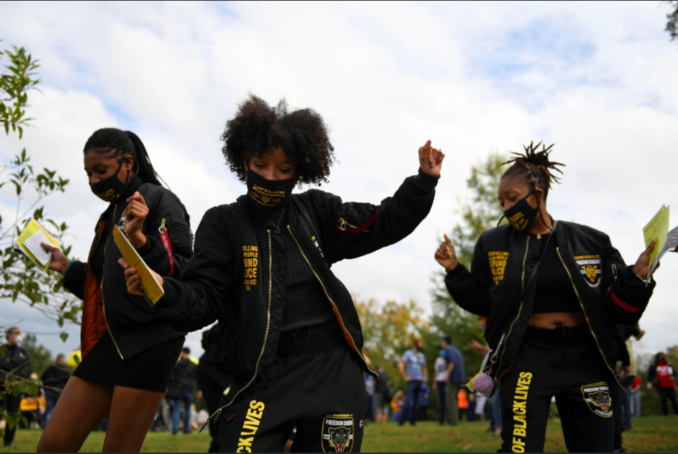 Nov. 8 –After spending days watching scenes of hundreds of election workers working long hours processing mail-in ballots in arenas and convention centers across metro Atlanta, this writer decided to attend a “Voters Decide” event at Freedom Park. It was called by many grassroots and nonprofit organizations that had carried out intense voter registration and “Get Out The Vote” campaigns.

Stacey Abrams’ “New Georgia Project” was the key organization that connected local efforts to statewide resources, advice and personnel. She had made history as a Black woman candidate for the Georgia governorship, barely losing to then Secretary of State, Brian Kemp who oversaw the elimination of thousands of voter registrations in the lead-up to the election.

My goal was to see whether the struggles against racial injustice, immigrant detention and deportation, discrimination against LGBTQ2S+ communities, denial of women’s reproductive rights, the jobs and housing crises, the pandemic and more remained at the top of organizers’ future priority list.

What had been organized was a rally supporting the emerging vote count for the Biden/Harris ticket in Georgia, to counter the pro-Trump protesters alleging “fraud” and “illegal ballots.” Often armed right-wingers were outside the ballot-counting facilities — and so intimidating that in some cases workers were escorted to their cars by security guards.

Just before the rally was scheduled to start, however, the news came that with the count in Pennsylvania, Biden had passed the threshold of 270 electoral votes needed to win. It quickly turned into a jubilant celebration of the end of the Trump presidency, with throngs moving in unison to dance music.

Understanding the real work is ahead

An AFL-CIO bus filled with members wearing union T-shirts unloaded and joined the festivities. Unable to find parking, dozens of drivers who had accompanied the bus kept up a horn-blowing circuit around the park.

When the rally began, speakers from the stage — mostly Black, women and LGBTQ+ — made clear that the vote in Georgia and the country was an encouraging sign: Working and oppressed people had exercised power, but the real work was ahead. The elimination of white supremacy, sexism, transphobia, mass incarceration and poverty would require efforts far beyond what the occupant of the White House could or would do. Everyone I spoke with echoed that same understanding of the groundwork needed to be done to achieve progress on these issues.

Nevertheless, the absolute euphoria that Donald Trump would no longer be president exploded, with raucous, cheering crowds lining Moreland Avenue and John Lewis Parkway, and a cacophony of cars blew their horns for hours late into the night.

The same was true at a spontaneous celebration of thousands at the cross streets of 10th and Piedmont in Midtown Atlanta — part of the route of the annual Pride parade. Others gathered at the huge mural of voting rights champion and late Congressperson John Lewis, off historic Auburn Avenue.

Similar scenes were seen in Decatur near the square where a Confederate monument was recently removed after years of public protest. Immigrant communities celebrated another victory with the defeat of two proponents of 287g, the program that turns local sheriffs into ICE agents. The new Cobb and Gwinnett County sheriffs campaigned on the promise of ending the program and won decisively.

Georgia remains squarely in the national spotlight with two Senate seats in a runoff scheduled for Jan. 5, 2021. Billionaire Kelly Loeffler, appointed to the Senate position by Governor Kemp, touts her 100% record of support for Trump. Her opponent is Rev. Raphael Warnock, well-known pastor of the historic Ebenezer Baptist Church, long identified with Rev. Martin Luther King Jr. and his family.

Loeffler, who has described herself as being to “the right of Attila the Hun” in a series of TV ads, has so publicly disparaged the Black Lives Matter movement that the members of the Atlanta Dream — the WNBA basketball team Loeffler partially owns — are wearing Vote for Warnock T-shirts.

The other Senate seat is currently held by Sen. David Perdue, a wealthy businessman who was appointed to the influential Georgia State Boards by his cousin, then-Governor Sonny Perdue, before David Perdue jumped into the Senate race six years ago. David Perdue’s opponent Jon Ossoff, who barely lost a U.S. House election in 2018, heads a documentary film company that investigates corruption and other criminal behavior internationally.

At stake is potential Democratic control of the U.S. Senate, possibly ending a barrier to COVID stimulus legislation sought by millions without jobs, health care, affordable housing or education.

The many I spoke with on Saturday who celebrated Biden’s electoral victory said, “voting is just one element of the struggle for real justice. What people do afterwards is decisive.”