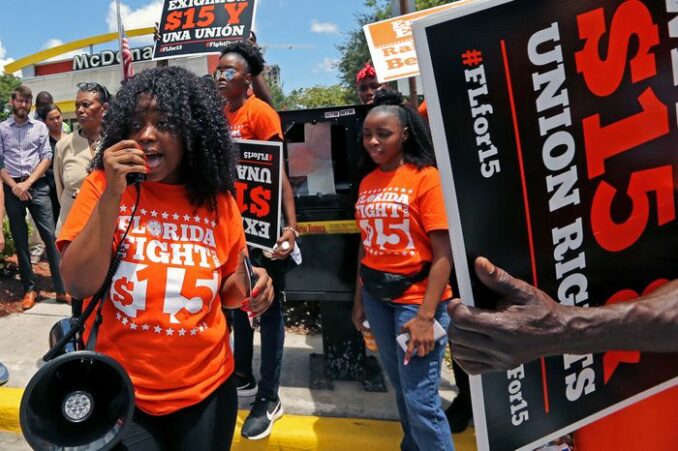 Among progressive ballot measures passed on Nov. 3, Florida approved raising the minimum wage to $15 an hour.

Nov. 9 – The 2020 presidential election ended just short of noon ET on Nov. 7, when networks announced that former Vice President Joe Biden had passed the 270 Electoral College votes needed to be declared a winner.

Although Biden’s delegate count is now closer to 290, many in the progressive movement are stunned that Donald Trump received over 70 million popular votes, given his blatant failure to contain the coronavirus pandemic and his rabid embrace of far right, racist and neo-fascist elements.

Yet behind that disturbing fact, there are strong signs of hope in the variety of progressive referendums passed on state and local ballots.

Spurred by mass protest against the cop killing of George Floyd in May, 18 police-related measures were on the Nov. 3 ballot in nine cities and four counties in six states. The measures related to police practices, police oversight boards, staffing, funding, the use of police body cams and more.

Measure B in San Diego, Calif., replaced the existing police review board with one appointed by the City Council and having the power to conduct investigations and also subpoena witnesses and documents related to deaths from police interactions and other complaints against police officers.

Measure E in San Francisco removed mandatory police staffing levels from the city’s charter. In Portland, Ore., Measure 26-217 established a new police oversight board in the city’s charter. Question 1 on the ballot in Philadelphia added language to the city’s charter calling for police to “eliminate the practice of unconstitutional stop and frisk, consistent with judicial precedent.”

The full impact of all these measures remains to be seen, but their passage clearly reflects the ongoing broad and vehement movement against police brutality.

Ballot referenda for a $15-per-hour minimum wage passed in Portland, Maine, and Florida, despite that state’s presidential vote going to Trump. Portland also voted for rent control, against facial surveillance and for a local Green New Deal. Voters in Wisconsin, Arizona and elsewhere passed referenda to increase public school funding.

In Boulder, Colo., a No Eviction Without Representation measure will tax landlords and use the money for legal representation for tenants facing eviction. Colorado also defeated an attempt to restrict abortions, family leave and medical leave. Oregon voters supported a “tax the rich” resolution to fund universal pre-K.  In several states, voters approved decriminalizing a range of drugs.

In Mississippi 73 percent of voters finally rejected the “Lost Cause” of the enslaving Confederacy by adopting a new state flag with the former Confederate symbol removed.

While several centrist Democrats failed to win over incumbent Republicans on the state and local levels, many progressive incumbents were re-elected by wide margins. Winners included “the Squad” of women of color and immigrant descent frequently demonized by Trump:  Ilhan Omar, Alexandria Ocasio-Cortez, Ayanna Pressley and Rashida Tlaib.

Other gains were widespread throughout the country. In New York state progressive educator Jamaal Bowman defeated an entrenched incumbent representative, while in Missouri Cori Bush became the first Black woman to represent the state in Congress. Kim Jackson, a lesbian social justice advocate, became the first out queer member of the Georgia Senate. In Florida, Shevrin Jones is now the first openly gay member of the state’s Senate, while Michele Rayner-Goolsby is the first openly queer Black woman elected to its House of Representatives. In Kansas, Stephanie Byers, who is Indigenous, was elected as the state’s first transgender legislative member.

All of these wins are to be applauded, but relying on the electoral process for change is coming at a pace that looks like too little, too late in the midst of country-wide crises.

Millions of workers continue to remain unjustly incarcerated by the U.S. injustice system. Nearly a quarter million have already died from COVID-19.  Millions face job loss and the inability to feed and house their families. Police brutality, while challenged, continues to attack the lives of  Black and Brown people. And in this election, no effective measures to curtail environmental destruction were on ballots for voters to okay.

Working and oppressed people in the U.S. are in desperate need of real social and economic change. Stopping Trump is important, but fighting capitalism – and its attacks on workers and oppressed peoples – must be the goal. This oppressive system can’t be voted away with a ballot initiative. We need a people’s revolution. This is change that a fight for socialism can bring on!