As soon as the news broke late on the morning of Nov. 7 that the 2020 U.S. presidential election was over, workers here could be heard cheering the humiliating defeat of Donald Trump. Soon after, they were in the streets — dancing and banging pots and pans. Strangers greeted each other warmly on corners and waved to each other from their cars. 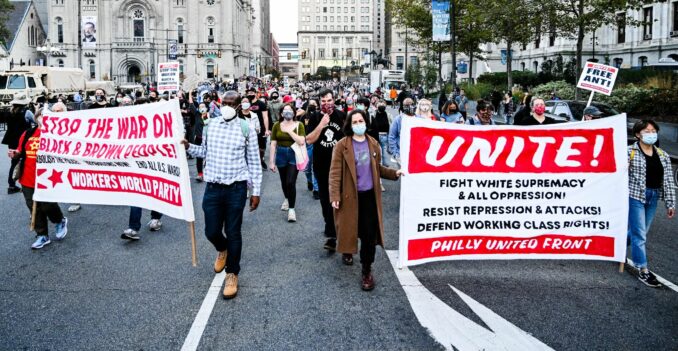 Thousands began to assemble at City Hall, Independence Mall, West Philadelphia’s Clark Park and elsewhere in this city, which is credited with pushing the vote for former Vice President Biden over the top. The spontaneous jubilation sparked by news of Trump’s ouster should not be underestimated!

Yet at the same time these celebrations began, a very different event was underway across town — the funeral of Walter Wallace Jr., a 27-year-old Black man gunned down Oct. 26 by two white Philadelphia cops, Sean Matarazzo and Thomas Munz. Classmates of Matarazzo claim that he is a longtime white supremacist.

Protests erupted immediately after Wallace’s killing, as communities across the city condemned the cops for responding with deadly force to a Black man who was experiencing a mental health crisis. Police body camera footage released the day after the election reveals the cops saying “Shoot him” to each other as bystanders — including Wallace’s mother — beg the cops not to shoot.

On Nov. 7, one part of the city wept as the other danced. The distance between these two realities is only widened by the election of Biden, who, when asked prior to Election Day if he had any response to the murder of Wallace, responded by condemning the people protesting police violence.

Philly United Front: ‘Keep the struggle in the streets!’

Nov. 7 was also the day chosen by the Philadelphia United Front to stage their first public demonstration in the city.

Organizers from this impressive alliance gathered for a rally at City Hall, where hundreds joined in to voice their commitment to the principles that unite them: opposition to white supremacy; abolishing police and carceral violence; and defending workers rights.

“We’re gonna keep our feet on the gas,” said Kempis Ghani Songster of the Amistad Law Project, who opened the rally. “We don’t care about your mandate,” Songster said, referring to the recent electoral victory of the Democrats, “Our movement has a mandate!

“For the first time ever, we have a woman in the White House. Make no mistake, women of color showed up strong. So let’s salute our sisters; let’s salute all women, but especially those who are always forgotten. They got Trump out of there. Now we have a woman of color in the White House, which is poetic, considering that Trump started his political career on birtherism, which is essentially delegitimizing nonwhite people in positions of power.

“But let’s be clear. Women in seats of power don’t necessarily translate into power for women, if those women are upholding patriarchy and white male domination. Just as Black people in seats of power don’t translate into the empowerment of Black communities. We know [Kamala Harris’] history — we know her history, especially as it relates to the Black community. And we know Biden’s history.”

‘Fighting injustice is a lifelong struggle’

Vanessa Maria of Philly Boricuas told the growing crowd, “Fighting against injustice is a lifelong struggle. We have to be committed to organizing beyond this election and to fighting for the rest of our lives, not just to make sure that we’re free, but that everybody is free. We have millions of comrades who are behind bars right now, who don’t have a say in what’s happening in these elections. We have to continue to fight for them and to free them all.”

Tamara Anderson from the Racial Justice Organizing Committee explained the history of Philadelphia arch-racist mayor and police commissioner Frank Rizzo and gave an emotional appeal. “Just like how America has never achieved the promise of democracy for all its citizens, American public schools have not achieved equity, democracy, and liberation for all of her students. If this Philadelphia is where the history of America began, then we should be the leader in showing everyone else what it should be.”

Gabe Bryant from the Black Philly Radical Collective came to the rally straight from the funeral of Walter Wallace, Jr., saying: “Although we may have slayed the dragon today, we have several more dragons out there to fight.”

Hundreds of workers marched behind the United Front’s banners from City Hall to Rittenhouse Square, one of the city’s wealthiest neighborhoods, demanding justice for Walter Wallace Jr. and calling for the release of Anthony Smith, a local organizer who was arrested on false charges by federal forces. Several people in outdoor restaurant seating stood and applauded the march and joined in with “Justice for Walter Wallace” chants.

Fermin Morales, a union worker and member of Philly Boricuas, took to the mic after the march wound its way around Center City, where it picked up hundreds more protesters to swell the ranks of the United Front. He proudly and uncompromisingly declared that he was a socialist and that no one should be ashamed to say it:

“When you become a socialist, you stop being a racist. Socialism is the way we will end racism and imperialism. Don’t learn about socialism from a capitalist! Learn what socialism really is!”