Published first in pagina12.com.ar on Nov. 8. The inauguration reported on here follows the landslide victory of pro-socialist forces in the Oct. 18 elections. They took place almost a year after a coup backed by U.S. imperialism drove Evo Morales, Bolivia’s first Indigenous president, from office. Morales is expected to return to Bolivia from exile on Nov. 9 for a triumphant caravan. Translation by John  Catalinotto. 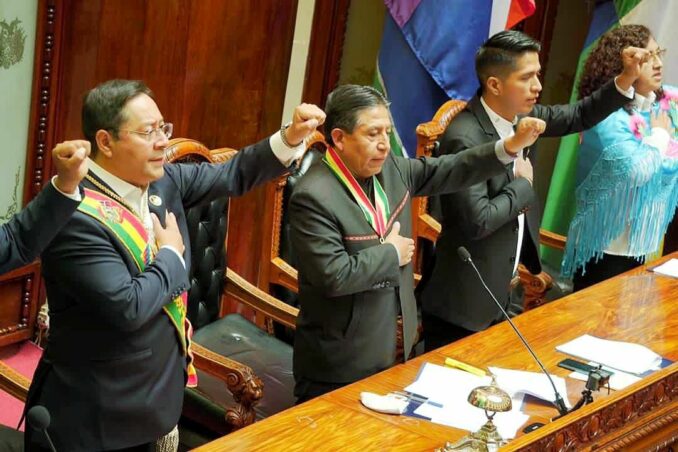 “We hope to be remembered as the government in which the Bolivian people rose up to recover democracy, dignity, peace, growth, and social justice,” said President Luis Arce in his inaugural speech, from the premises of the Legislative Assembly. At his side were Vice President David Choquehuanca, President of the Senate Andrónico Rodríguez, and President of the House of Representatives Freddy Mamani. 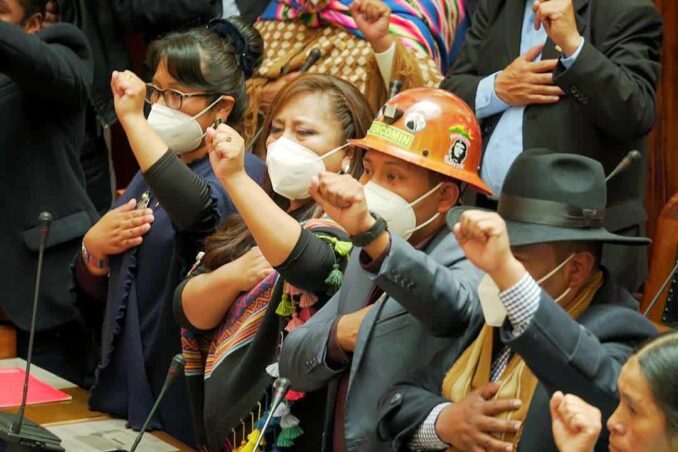 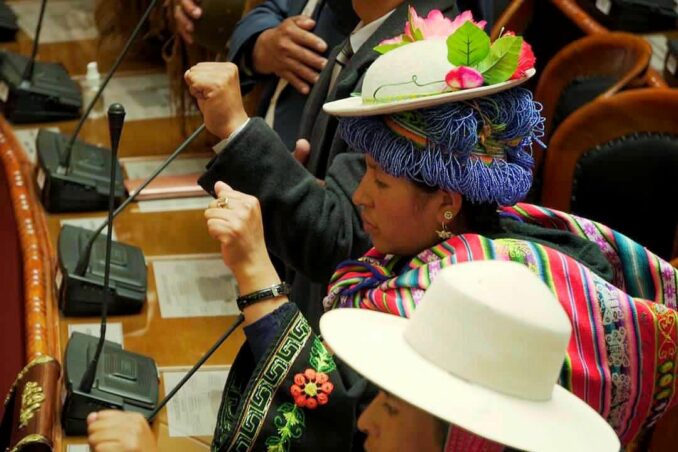 As he spoke, the social, Indigenous, mining, union, and militant movements that make up the Movement Towards Socialism (MAS), which had come from different parts of the country, filled and surrounded Plaza Murillo, turning the center of La Paz into a celebration. The mobilization had begun the night before when the organizations held a vigil near where the inauguration was scheduled.

The movements making up MAS mobilized early to counter threats from a sector of the right wing — threats that persisted until the last minute. On Saturday night, Nov. 7, a rightist rally and march took place in La Paz, its slogans charging election fraud and demanding the inauguration be suspended.

Although at that time it was clear that the transfer of office would take place and that the social forces of the right were demoralized, the movements stayed alert up to the last moment to counter any unforeseen events.

In his speech, President Arce focused on the political climate. He characterized what has happened since the coup d’état as “an internal and systematic war against the people, especially against the poorest (…) they sowed death, fear and discrimination, intensified racism (…) persecuted the leaders of MAS and the social movements, and caused deaths, injuries, imprisonment, persecution, isolation and exile.”

There was constant mention of the massacres in the cities of Sacaba and Senkata, which had occurred a few days after the coup in November 2019. A minute’s silence was held for those who were killed. The new president referred to them as “a symbol of dignity and resistance,” and paid homage to “the fallen, the heroes of the people who have won back democracy.”

Several international delegations were present at the inauguration, including from the governments of Argentina, Paraguay, Colombia, Spain, Venezuela, Uruguay, Iran, Chile, Arab Emirates, as well as delegations of political parties from different countries, along with Bolivian movements and members of parliament.

As expected, the coup “interim” President Jeanine Áñez failed to show up. After her departure to the city of Trinidad, in the department of Beni, she announced her absence and also denied that she planned to flee the country [to escape prosecution].

From the opposition to MAS, the political leader Carlos Mesa was present. Mesa came in second in the Oct. 18 elections [with about only half of the 55% who voted for MAS]. Mesa recognized Arce’s victory from the beginning. However, both he and his parliamentary group left the premises before the speeches.

In a message of dialogue and unity, present also in President Arce’s speech, Vice President Choquehuanca said, “We must overcome the division, hatred, racism and discrimination among compatriots, end the persecution of freedom of expression, and stop judicialization [using the courts to eliminate political opposition], no more abuse of power (…) no more impunity − we’ll have justice, brothers, but justice must be truly independent.”

What will the ultra-rightists do?

The new government takes office in a climate of instability. It may be that on the one hand, those who made up the de facto coup government are in retreat and may try to escape from Bolivia so as to avoid prosecution for crimes, while in addition Carlos Mesa is trying to consolidate his place as the main [legal] opposition. Nevertheless, there is another sector, led in part by Luis Fernando Camacho – who finished a distant third in the elections – that embodies the most radical pro-coup wing of the rightist forces.

This same Camacho sector refuses to recognize the validity of the election results or the inauguration. What will they do from now on? This is one of the main questions.

President Arce said, “These minority sectors raise the banner of democracy only when it is convenient for them, and when it is not, they resort to destabilization, violence, or coups d’état to take power.” Arce referred to the use that these sectors made of “paramilitary groups,” which carried out actions until Friday, Nov. 6, in Cochabamba and Santa Cruz.

The new government faces a triple crisis, mentioned by Arce: democratic, a product of the coup regime’s persecution of the people; health care, because of the pandemic; and economic. Áñez’s government left the budget with a deficit, with a drop of 11.1% of the Gross National Product, a fiscal deficit of 12.1%, a deficit of 8.7% of the Federal Treasury, and a debt of $4.2 billion contracted in the last eleven months. “Each day that passes without taking action is a day that the situation becomes more complicated,” said President Arce.

Social expectations of the new government are high. This is on the part of those who mobilized in the Plaza Murillo, as well as the 36 Indigenous nationalities, the organization of the Ponchos Rojos that was part of presidential security, and the Bolivian Workers Central, as well as by broad layers of the population who in less than a year faced the impacts of a recession, the pandemic, and a de facto government that threatened and persecuted the popular organizations, and failed to honor any of its promises.

The new president referred to the international situation and affirmed, as had been anticipated, that he will focus efforts on building the “political unity of the diversity of Latin America and the Caribbean” through the Community of Latin American and Caribbean States (CELAC), and  in the South American arena through the Union of South American Nations (UNASUR), “as a space for integration and a mechanism for coordinating policy, where we all meet regardless of the political orientations of the governments.”

The new Bolivian government seems to be a possible actor to bring together and work together with different parts of Latin American progressivism.

The inauguration opens a new moment within the process of change in Bolivia: “We are committed to rectify what was wrong and deepen what was right,” affirmed Arce. Within this new stage, there are challenges to the internal order, such as requests from movements for a change of leadership, as well as threats from destabilizing forces that have already warned they will not return to the democratic road — or so it seems.

Sunday, Nov. 8, was a day of celebration in La Paz, now that Evo Morales is close to re-entering the country, and Bolivia is leaving behind one of the grimmest pages of its recent history with a democratic victory and a new popular government.