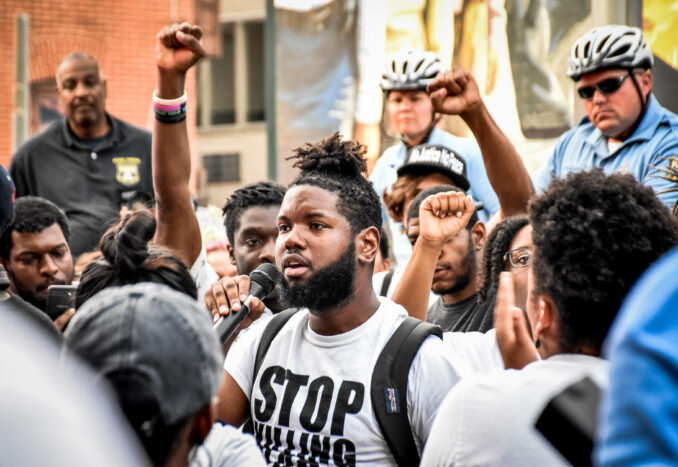 Smith speaking during a march for police abolition in Philadelphia, June 28, 2016.

Since George Floyd’s death last May sparked demonstrations against police brutality across the U.S., federal prosecutors have filed over 300 felony cases against demonstrators. While a few cases charge members of right-wing groups, most are lodged against anti-racist activists like Anthony “Ant” Smith, who was arrested by federal agents in Philadelphia on Oct. 28.

Smith and two other men were charged with “arson of property belonging to an agency [the Philadelphia Police Department] receiving federal funding, arson affecting interstate commerce, obstruction of law enforcement during civil disorder, and aiding and abetting.”

U.S. Attorney William McSwain announced the indictments at an Oct. 29 press conference. McSwain, a Trump appointee, has made a campaign of filing federal charges against individuals, after Philadelphia District Attorney Larry Krasner had either filed lesser charges or dismissed their cases. Krasner has accused McSwain of “grandstanding” to benefit his own political future.

The indictments against Smith, Carlos Matchette and Khalif Miller are sparse on details, other than claiming they were involved in burning a Philadelphia police vehicle during a May 30 demonstration. A Philadelphia woman, Lore-Elisabeth Blumenthal, was previously charged with two counts of felony arson on June 19.

Many in the city’s progressive movement quickly denounced both the bogus charges and their timing. They came in the midst of daily protests against the police murder of Walter Wallace Jr. and less than a week before a highly contested presidential election.

Smith’s lawyer Paul Hetznecker blasted the charges: “Utilizing the awesome power of the federal government to target activists and select them for federal prosecution — during one of the most important social justice movements in our history — sends a dangerous message.” (Philly.com, Oct. 29)

‘Very suspicious of the timing’

Human Rights Coalition PA hosted a press conference on Oct. 30 with over 150 people attending. Several speakers there echoed these remarks. They noted that the authorities may have targeted Smith shortly after a recent articles in the Philly Magazine. And the Philadelphia Inquirer has applauded his work in the local anti-police brutality movement.

Smith is a leader with Philly Racial, Economic and Legal (REAL) Justice and is involved with the recently formed Black Radical Philly Collective. He was instrumental in a successful two-year campaign to take down the statue of Frank Rizzo, Philly’s notoriously racist former mayor and police chief.

Robert Saleem Holbrook, Executive Director of the Abolitionist Law Center, said, “We represent Anthony Smith [as the lead plaintiff] on a lawsuit stemming from the protests on 52nd St. during the summer. We find these charges not only unfounded, but we are very suspicious of the timing. No police officers, and who assaulted an entire community in West Philadelphia during the summer, were charged or held accountable for that police riot when Philadelphians came out in the street in support of George Floyd. We find it disturbing that police officers who killed Walter Wallace Jr. are not held accountable, but Anthony is being held right now at a Lehigh County Jail in Allentown, Pa.

Holbrook continued, “These charges are political posturing related to a contested election coming up next week. We expect these charges to be dismissed. We are demanding that Ant be released immediately. We look forward to Ant being completely vindicated and these charges dismissed. He is certainly not guilty.”

Deandra Price with Philly REAL Justice and Black Alliance for Peace said, “Our comrade Ant Smith was kidnapped by federal agents on Wednesday morning. We are here to talk about him as a person and not the character they try to paint him as, but the character we know he is.” 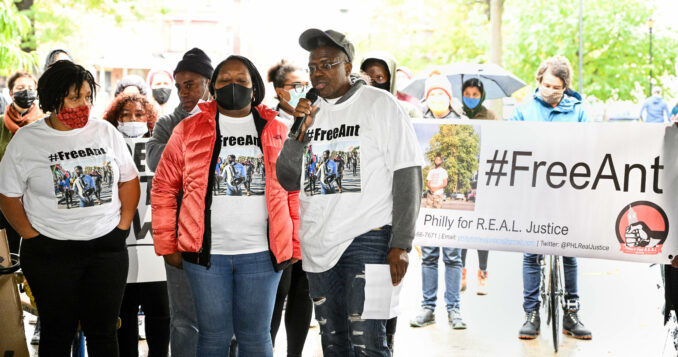 Jasmine Peake-Miles, Smith’s mother Tashia Ervin and his cousin Devon Gooden speak out at a Oct. 30 press conference in Philadelphia.

‘One of the most passionate human beings I’ve ever met’

Minister of Confrontation for the MOVE organization Pam Africa asked those in the crowd to pledge to get more people out to join the fight for freedom for Ant, “Ant has always been on the front lines fighting for all of us. This government says you are innocent until proven guilty — so why is Ant in jail. Why are the cops who we saw kill Walter Wallace Jr. not in jail?”

Smith’s mother Tashia Ervin and his cousin Devon Gooden spoke on Ant’s character. Gooden stated, “He is nonviolent — not the type who sets cars on fire.  He speaks with his words, with his pen, and he makes his points known without violence. He is a Frederick Douglas. He is a Martin Luther King. He is the type of person who stands up for people who are unable to stand up for themselves.”

Gabriel Bryant with the Black Radical Philly Collective said, “Ant Smith will be coming home.  Let’s try a few facts. Facts is: he is innocent. Facts is: he is one of this generation’s greatest orators in the history of the city of Philadelphia. He is one of the most passionate human beings I’ve ever met in my short time on the planet.”

Bryant discussed Smith’s close relationship with his students in the social studies class he teaches at Youth Build. “When I’ve visited the school on many occasions, I could see the way he would resonate and connect with those students and his fellow staff and faculty. The way everyone loved him — that showed a sense of strength. Then I see him giving free food to the communities every Friday. We will bring him home.”

Jasmine Peake-Miles, who has known Smith since they were both freshmen college students, said, “His love for his community, his family and friends is insurmountable. If he’s not home doing lesson plans, he’s out helping the community. . . . He fought for you. We must fight for him!”

Deandra Price concluded by reading from the Philly REAL Justice press release: “Ant Smith is a beloved social studies teacher at a north Philly charter school. He showed a passion for making sure that everyone around him is protected at all times. He was a 2018 recipient of [the] Mayors Award for Distinguished Service. There is a laundry list of accolades that Anthony has.”

She concluded, “They really messed with the wrong one. They really did. I don’t think they realized who they were messing with, when they decided he was the one they would kidnap. Ant will be free!”

A bail hearing for Smith is scheduled for Nov. 5.