Nov. 2 – CNN reports that a record 95 million-plus voters have already cast their ballot in the presidential race as of today.  This number already represents at least 70% of the 139 million total votes cast during the 2016 election, all but guaranteeing there will be a record-setting number of votes by Nov. 3 and the highest percentage of eligible voters in more than a century. 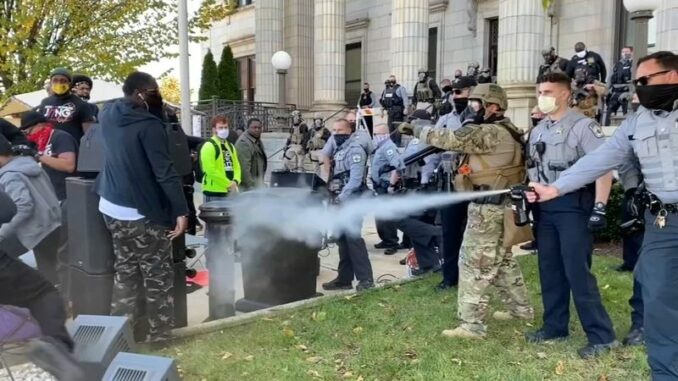 Voters are traveling hundreds of miles and standing or sitting in long lines for hours, braving wind and rain, wearing masks and social distancing at polling places, hoping that their vote will be counted in a timely manner.

There is no doubt that an unprecedented number of those votes were cast by African-Americans, particularly in Georgia, North Carolina and other Southern states, and in urban areas, where Black people reside in large, disproportionate numbers. There are political and historical reasons why voting is taken so seriously by Black people.

The main social base for the Democratic Party has been African Americans, particularly since the Black masses in the South legally won – through mass struggle – the right to vote under the 1965 federally mandated Voting Rights Act. But there has been an ongoing threat to the exercise of this basic democratic right.

Not since the passage of the Great Compromise of 1877 – which violently stripped formerly enslaved Black people of any kind of democratic rights achieved under the radical period of Reconstruction after the Civil War – has voter suppression been so blatantly encouraged and instituted as it is now, with the vocal blessing of the Trump administration.

Those who have felony records have either lost their right to vote forever or have to go through many legal maneuvers to win it back. With Trump’s pro-cop, anti-migrant racist appeal to his base of armed, neofascist, rightwing militia working hand-in-hand with the police, Black people and others deemed to be supporters of the Joe Biden/Kamala Harris ticket have been physically threatened or actually attacked for attempting to vote or to promote the vote.

These attacks are being reported around the country. For instance, in Graham, N.C., Black demonstrators, including children as young as three years old, were viciously attacked by police with pepper spray on Oct. 31 when, while marching to polling places, they stopped to protest in front of a Confederate monument. Some were arrested.

Pennsylvania Governor Tom Wolf has sent the National Guard to Philadelphia to impose a curfew in the aftermath of the police murder of a 27-year-old Black man, Walter Wallace Jr., who was shot multiple times in front of his home. His mother had called for an ambulance for her son, who had a history of mental illness, but the police arrived instead and executed him in broad daylight. Wallace is the most recent addition to the tragic list of nearly one thousand people killed so far by the police in 2020.

Several hours after the Wallace shooting, a young mother, Rickia Young, had her car surrounded by Philadelphia police while attempting to leave an area where a protest was taking place. She and her teenaged nephew were then beaten by the police while her 2-year-old son sat in his car seat. Despite many arrests and now the calling in of the National Guard, community and political activists have kept a strong presence in the streets demanding justice for Walter Wallace, just days before the election.

Another disturbing sign of racist state repression in Philadelphia has been the completely unwarranted arrest by the Federal Bureau of Investigation of Ant Smith, a leader of the Philly REAL [Racial, Economic and Legal] Justice coalition. REAL Justice was formed to defend Black Lives Matter by fighting all forms of racist repression. There is a national call on social media and in the streets demanding the freedom of this dynamic Black activist and for all the false charges against him to be dropped.

It is very difficult to separate all these events in Philadelphia from the overall repressive atmosphere in the lead-up to the election.

An ongoing war against Black people

While white supremacy and police brutality have always been relied on to maintain capitalist rule, the lynching of George Floyd has caused the intensity of police brutality to be even more scrutinized. According to a study by Bellingcat and Forensic Architecture, at least 950 incidents of police violence against peaceful protests have been recorded over the past five months, including “more than 500 instances of police using less-lethal rounds, pepper spray and teargas; 60 incidents of officers using unlawful assembly to arrest protesters; 19 incidents of police being permissive to the far right and showing double standards when confronted with white supremacists; five attacks on medics; and 11 instances of kettling.” (Guardian, Oct. 29)

Misogyny, anti-LGBTQ2S+ bigotry, ableism, and other oppressions are also intensified under the white supremacy exhibited by Trump and his ilk.

The current crisis of police and neofascist violence, instigated by the White House, once again proves that the fight against the state is a key part of the Black struggle for self-determination. At the height of the Black Liberation struggles here and worldwide during the 1960s, Youth Against War and Fascism, a mass unit of Workers World Party, brought the slogan “Stop the War Against Black America” to the movement. This was to build broad solidarity between the antiwar movement and Black militant groups facing a brutal, state-sanctioned, FBI-led assault that included incarceration, intimidation, infiltration and assassination.

Over 50 years later, the same political message still applies. But now the Black Lives Matter movement is carrying forward the struggle for justice and equality with a broad multinational base. For over eight years, since the racist murder of 17-year-old Trayvon Martin in Florida, the BLM movement has been on the front lines in battling police brutality in all its forms, embracing all political currents regardless of nationality, sexuality, genders, gender expressions, generations and abilities.

It has been acknowledged that BLM constitutes the largest mass movement in the history of the U.S., involving millions of people while gaining international supporters. This unprecedented resurgence of activism was mainly spurred on by the nearly nine-minute public execution of George Floyd by the Minneapolis police on May 28. Since then, protests against the police have taken place in thousands of cities and in various forms, including spontaneous strikes by professional basketball, baseball, hockey and soccer athletes – despite the COVID-19 restrictions.

While it is understandable that millions of people will breathe a sigh of relief if the Biden/Harris team defeats the Trump/Pence administration, class relations will not fundamentally change. An election cannot rectify class contradictions, even though it serves as a barometer to test the political mood within society.  Ultimately, the vote boils down to which representative from one of the two major capitalist parties – Republican and Democrat – will best administer the repressive capitalist state apparatus to keep the billionaire, corporate bosses and bankers in power so they can ruthlessly exploit the workers and oppressed.

In terms of U.S. foreign policy, while there may be various strategies and approaches, both Democrats and Republicans are on the same page when it comes to advancing the imperialist aims of expanding the U.S. empire for profits versus respecting a country’s right to sovereignty and self-determination. History has shown that the Democrats could very well start a war, as could the Republicans.

While it isn’t surprising that police unions have endorsed Trump, Biden has made it crystal clear that he is opposed to any BLM call to defund the police. Harris has faced criticism for being the “top cop” in California as state prosecutor before becoming senator.

The police have never been more isolated and unpopular, according to opinion polls. This has not kept their brutal tactics from being on full display in preparation for the coming struggles, including rebellions on the horizon as the economic crisis looms heavy over the coming months. This crisis will manifest itself with more massive unemployment, evictions, and hunger on top of the worsening surge of the COVID-19 pandemic. The Democratic Party has shown itself to be ineffectual in pushing the Republicans to back a second stimulus package that could bring temporary economic relief to the hurting masses.

A militarized, occupying police presence will only bring about more capitalist instability as the masses of people become more rebellious with want and need.  And whoever occupies the White House for the next four years will not be able to contain the angry masses if they are in a fighting and desperate mood.

The masses, with the aid of political left forces, will have no other choice but to confront the ruling class’s racism and white supremacy and unite to fight and organize for immediate human needs – now more than ever during this pandemic crisis. This is why it is important to stay in the streets once the elections have come and gone – to fight for a socialist future.