Not held accountable for brutalizing Black Philadelphia residents earlier this year during protests over the murder of George Floyd, police in Philadelphia appear to be more emboldened, and essentially out of control.

Less than 10 hours after two police officers were caught on video shooting and killing a 27-year-old Black man, Walter Wallace, Jr., who was in need of mental health intervention, 15 officers surrounded an SUV driven by Rickia Young and proceeded to brutalize and terrorize Young, her nephew and her two-year-old son. 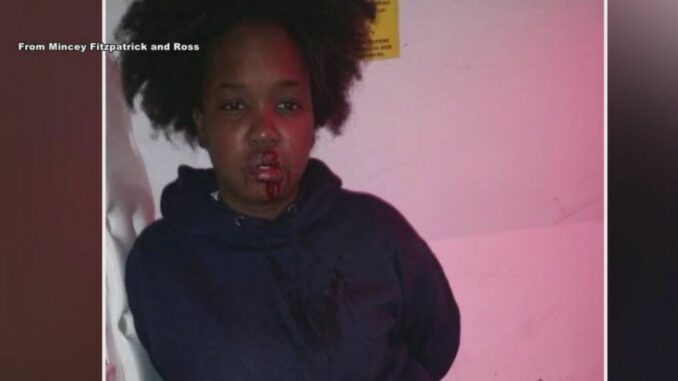 Picture of Rickia Young taken by her attorneys shows injuries sustained from police beating on Oct. 27.

Wallace had been killed in front of his mother and neighbors who were pleading with police not to shoot, late in the afternoon of Oct. 26.  Young’s car was surrounded by cops wielding batons they used to smash the car’s windows shortly before 2 a.m. on Oct. 27.  Both incidents took place within a mile of each other in West Philadelphia’s 18th police district.

A viral video of the police attack on Young, a Black 28-year-old home health aide, surfaced the next day. (tinyurl.com/yyvly22e) Her SUV is seen attempting to make a three-point-turn to leave the vicinity of 52nd and Chestnut streets, near a police confrontation with demonstrators protesting Wallace’s murder. After first signaling the driver to make the turn, around 15 officers then surround the vehicle. Several use their batons to smash the car’s windows.

Police then drag Young and her 16-year-old nephew from the car and proceed to beat them on the street. An officer is seen reaching in to remove a toddler from the car’s back seat.

As abhorrent as this police conduct captured by the video is, what happened after the incident is even more disturbing.

A social media post from the National Fraternal Order of Police (FOP) appeared on Facebook and Twitter on the morning of Oct. 28 showing a young, white, female officer holding a Black child (Young’s) with the false caption: “This child was lost during the violent riots in Philadelphia, wandering around barefoot in an area that was experiencing complete lawlessness. The only thing this Philadelphia police officer cared about in that moment was protecting this child.”

The FOP went on to say: “We are not your enemy. We are the Thin Blue Line. And WE ARE the only thing standing between Order and Anarchy.” The post has since been deleted.

Philadelphia civil rights attorneys Kevin Mincey and Riley H. Ross III, who are representing Young, later held a press conference where they denounced this propaganda and provided details about the police attack.

According to the lawyers, Young drove from her home near Temple University in North Philadelphia to pick up her nephew in West Philadelphia after seeing news coverage of the police riot against protesters.  She took her son along to get him to sleep in the car. When she unknowingly turned onto a street where police were confronting demonstrators, she complied with their orders to turn around just before police surrounded her vehicle.

After badly beating Young, police separated her from her son and held her for several hours before releasing her without charges. Attorney Mincey told the media that when Young asked where police were taking her child, they refused to say, telling her, “He’s gonna go to a better place, we’re gonna report it to the Department of Human Services.” (Philly.com, Oct. 30)

While handcuffed, Young was given medical treatment at Jefferson University Hospital with police standing by. She had a bloody nose, a swollen trachea, blood in her urine, and swelling and pain on her left side. (Philly.com, Oct. 30)

During transport in a police van Young was able to use another woman’s cellphone to ask her mother to pick up her son. According to Mincey, police directed the toddler’s grandmother to a Center City location four miles from the arrest site, where she found the toddler sitting in his car seat in a police cruiser with two officers. “The child had a lump on his head and glass from the SUV’s broken window was still in his car seat,” Mincey said.

Police have not told Young where her car is. Mincey said that Young’s purse, wallet, and her son’s hearing aid were left in the car. The attorneys intend to file a civil rights case against the police department on behalf of Young and her son.

Young stands a good chance of winning her lawsuit. Should the Wallace family file, they too are likely to win. On average Philadelphia pays out $10 million a year for lawsuits stemming from police brutality. But in Philadelphia it is the taxpayers who pay for civil suits stemming from police abuse – police officers are protected from having to take direct responsibility.

Frank Rizzo, the notoriously racist and brutal former police commissioner (1968-71) and mayor (1972-80), gave the FOP free rein to unleash terror against the city’s Black and Brown communities, with little fear of reprisal.  Not one mayor since Rizzo has dared to challenge this mob in blue.

In response to broad criticism of Philadelphia police actions against demonstrators early last summer, on Oct. 29 the City Council passed a ban on police use of “less lethal” munitions – tear gas, pepper spray and rubber bullets — against demonstrations and other activity protected by the First Amendment. Yet the resolution makes no mention of guns and batons – liberally used by cops in Philadelphia this week.

With the city’s political establishment reluctant to take on the “Thin Blue Line,” it is unlikely they will make any fundamental changes. This is why the movement is demanding: “Abolish the police!”