On June 25, Tamir Elijah Rice should have turned 18. He would have been old enough to vote for the first time.

But Nov. 22 will be the sixth anniversary of Tamir’s murder by Cleveland police. On that day, the 12-year-old was playing with a pellet gun outside Cudell recreation center. Two city police officers pulled up on Tamir, and within seconds Timothy Loehmann shot him dead. Tamir’s older sister was handcuffed and forced to the ground, after she questioned the cops’ actions. 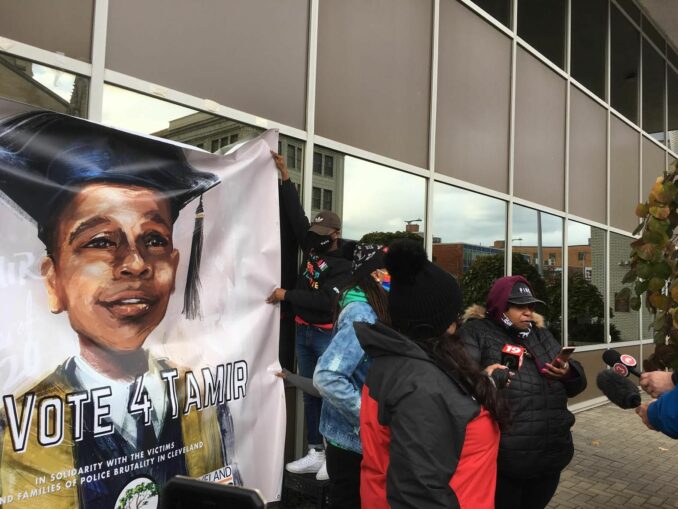 Neither Loehmann nor his accomplice, officer Frank Garmback, were ever charged for this heinous crime. Loehmann was fired in 2017 — not for killing Tamir, but for withholding information on his job application that he had previously been fired in a nearby suburb. The Cleveland Police Patrolmen’s Association, wrongly characterized as a “union,” has argued for Loehmann’s reinstatement; Garmback remains on the force.

In 2015, a Cuyahoga County grand jury, acting at the behest of County Prosecutor Timothy McGinty, declined to bring charges against the officers. Until last week the Rice family had some hope that the federal Department of Justice might conduct a grand jury investigation. But the Oct. 29 New York Times reported that, according to a whistleblower at the Justice Department, the investigation requested in 2017 was quietly quashed in August 2019.

Over a year later, the Department has neither officially closed the case, nor has it notified Rice’s family of its decision not to convene a grand jury. The statute of limitations for filing serious charges will expire this year. The capitalist state has once again displayed its blatant contempt, especially under the Trump administration, for victims of racist police brutality.

On Nov. 1, a group gathered outside the Cuyahoga County Board of Elections — where long lines of early voters had already formed before voting started — to say “We Vote for Tamir.” Black Lives Matter Cleveland, the Tamir Rice Foundation, the Ohio Student Association and Cleveland Votes jointly sponsored the action. A huge banner showed an artist’s rendition of Tamir Rice graduating from high school, which was also displayed on stickers which voters wore into the polls.

Joe Biden was vice president on the day Tamir was murdered. Cleveland had and still has a Democratic mayor; the Democratic Party dominates City Council and Cuyahoga County Council. Democrats have done little to alleviate systemic racism in education, employment or the “criminal justice” system.

Nevertheless, resistance to the Republican Party’s plans for voter suppression is part of the struggle against institutional white supremacy. This same white supremacy enabled the killing of Tamir Rice, Malissa Russell, Timothy Williams, Tanisha Anderson and numerous others in Cleveland alone.

“Whoever wins the elections, we need to make him accountable,” Samaria Rice said in a news release. “Accountability looks like policy change, which includes a ceasefire on Black and brown people. We are being hunted out here; there’s a war being committed against Black and brown people.” (cleveland.com, Oct. 30)