October 23 — Ecuador’s regime mobilized all 47,000 national police to repress massive worker-student demonstrations in Quito, the capital, and 17 provinces of the country on Oct. 22. 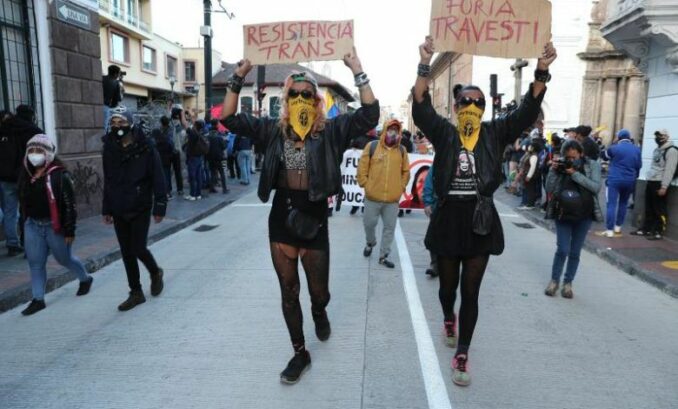 Trans demonstrators lead Oct. 22 protest in Quito. Is a new uprising ahead?

Only four days earlier, the government of right-wing President Lenín Moreno was forced to concede to Andrés Arauz the right to represent the Citizens’ Revolution (RC) as its candidate for president in the upcoming election in February 2021. Arauz and running mate Carlos Rabascall will campaign under the sign of UNES, “Union for Hope.”

Memories of last October’s mass uprising, sparked by a massive revolt against a price hike for gasoline, haunt the Moreno regime. The revolt brought Indigenous organizations, such as the CONAIE, into the streets along with people from every sector including the Citizens’ Revolution, the party of former President Rafael Correa.

By dividing Correa’s movement from that of the Indigenous peoples, Moreno was able to stop the massive rebellion with minimal concessions. This year, the mobilization of the entire police force shows how much the Moreno regime fears a popular uprising. What he fears most is an uprising that unites his two main enemies: the progressive RC and the Indigenous peoples.

Since Moreno abandoned his electoral promises three years ago, he and the powerful interests he serves have desperately tried to annihilate the RC. So far they have failed. Instead, his policies of privatization and the government’s inept and criminal handling of the COVID-19 crisis have alienated greater and greater sections of the population.

In contrast, Andrés Arauz has been welcomed by the people wherever he goes. The latest polls indicate that Arauz will defeat right-wing banker Guillermo Lasso on the first ballot, just as Luis Arce won in Bolivia. In both Ecuador and Bolivia, however, the real struggles for power are in the streets.

The popular struggle in Ecuador against the wealthy and their U.S. imperialist backers takes place in the midst of similar struggles in South America. Evo Morales’ Movement for Socialism just won a landslide presidential election in Bolivia. Mass protests continue in Chile and Colombia despite repression. The struggles in this hemisphere against Washington’s domination are all connected.

The rebellion of October 2019, known as the “Great Uprising,” brought hundreds of thousands of people into action. In a graphically illustrated book, Indigenous leader Leonidas Iza calls the uprising a school for revolution. The book, “Outburst: Rebellion of October in Ecuador,” has lessons for the new generation of revolutionaries.

But last October’s intense class struggle was set back when CONAIE leaders made a controversial agreement to take amnesty for demonstrators and other key demands off the table during negotiations to end the insurrection.

The government conceded a little, withdrawing Decree 883, which had ended fuel subsidies and hiked the price of auto and truck fuel. Having stopped the uprising, the regime continued its relentless dismantling of the Citizen’s Revolution.

During the time the Citizen’s Revolution ruled Ecuador — the “Decade Won” between 2007 and 2017 — almost 2 million of Ecuador’s 17 million people escaped poverty as the Correa government sought to reduce inequality.

Following U.S. orders, Moreno’s regime expelled 382 Cuban doctors last November in a health care coup d’état. Moreno has used the Coronavirus pandemic as a shield to hijack the country and to prevent the people from stopping his onslaught of privatization and termination of vital social services. His courts have summoned 670 Indigenous people to appear, and leaders still face charges of instigating sabotage, kidnapping and terrorism.

During the past year of ruthless neoliberal adjustment, the government has brutally attacked the people with IMF austerity packages, tax cuts for the rich and laws that “flexibilize” exploited labor. These measures have caused a million layoffs, beginning in the public sector, and health care cuts that have led to 35,870 deaths related to the pandemic.

Fraud involving hospitals and personal protection equipment was too big of a scandal for the corporate media to hide. Neoliberal restructuring — privatization, removal of work rules — has left 23% of Ecuadorian workers subemployed — with almost half employed in the informal economy. Life for these workers is precarious.

Despite its enormous stolen wealth and control of the mass media and the manipulated “justice” system, the right wing is losing the battle to recolonize the minds of the people. An example is the mass hostility toward Minister of Government María Paula Romo, the civilian commander of the National Police, who have killed 11 people. According to the Inter-American Commission on Human Rights (IACHR), 19 demonstrators lost an eye due to the impact of  tear gas canisters and other “nonlethal” projectiles.

Called the “minister of death,” Romo released a book in August in which she claimed last October’s mass demonstrations put Ecuadorian democracy under attack. Romo was forced to apologize for her brutal repression of a Sept. 15 peaceful protest by hundreds of postgraduate doctors who were not paid for their frontline work during the pandemic.

The ironic title of Romo’s hateful anti-Correa propaganda piece, “October: Democracy Under Attack,” promotes the Big Lie. The reality is Ecuadorians live in a dictatorship — a police state that protects the interests of the International Monetary Fund and the capitalist Ecuadorian oligarchy.

In September, doctors and teachers protested because they hadn’t been paid for months on end. The Minister of the Environment resigned when 398 of his workers were fired. And $1.7 million was allocated to the National Police to purchase armored vehicles for riot control, because the government expects a much bigger insurrection if the people’s vote is fraudulently stolen.

Many ignored an early warning from Vice President Jorge Glas, for which he was sequestered like former Brazilian President Lula da Silva via legal coup and incarcerated three years ago. Glas was Ecuador’s first target of “lawfare,” which can be defined as the combined media and judicial extermination of political enemies.

The RC’s elected Prefect of Pichincha Province Paola Pabón was arrested Oct. 14, 2019, and imprisoned with others charged with participating in a conspiracy between leaders of RC and Venezuela’s President Nicolás Maduro to violently overthrow the government.

Pabón said that when Moreno denounced the alleged “plan” in a live broadcast on Oct. 7, flanked by his uniformed generals, “I knew they were coming for us.” (youtube, Oct. 14) The absurd charges were later reduced to “rebellion,” because only the cops were armed. Pabón thanked the Inter-American Commission for Human Rights for her release in December after 72 days in prison, because IACHR had granted measures of protection in favor of the alleged coconspirators.

The RC leader talked with Contexto y Acción about lawfare and political annihilation. She said, “They are breaking us economically. Do you know what so many lawyers’ defenses cost? Our accounts and salaries are frozen,” she said. “To break us personally is a way of breaking the legacy.” (ctxt.es, Sept. 7)

Pabón said, “This undoubtedly has a format that goes beyond the limits of our countries. There are transnational interests here that were uncomfortable with our progressive regimes in the face of global geopolitics, and U.S. embassies have played a role in these processes that we have called the ‘New Condor Plan.’

[Operation Condor was the 1970s CIA plan for violent repression of left sectors in the Southern Hemisphere. Military dictatorships were coordinated by hi-tech telecommunications and the School of the Americas in Panama.]

A xenophobic “false flag” arrest of 17 Venezuelan taxi drivers, who were supposedly engaged in a plot to assassinate Moreno, would coincide with the allegations against President Nicolás Maduro.

In August 2019, in an interview with elestado.net, Pabón said, “I think that there are two experiences that are the key to understanding [the struggle in Venezuela]: the popular organization to defend their political process and also [. . .] institutional strength to defend the sovereignty, not submitting to the political and financial hegemonies. The cost is high. But at the same time we must reconsider, when the aggression and the blocking cease, how can we guarantee an economic process that avoids the dependence on the external sector and on oil. What Nicolás Maduro has had to experience has been cruel, but he could not have resisted as he does without a strong and well articulated popular political organisation . . .”

The leaders of RC and the left will need to reevaluate their fraught relations in this critical moment. Correismo is not in and of itself “the left.” The fragmented left is much more complex. Many believe that CONAIE and the Correistas must unite to end neoliberalism. And it may not be possible for the Ecuadorian people to defeat neoliberalism on their own.

In Ecuador, all issues are Indigenous issues. Leonidas Iza, president of the Cotopaxi Indigenous and Farmers Movement (MICC), said in a May 24 Youtube interview: “One of the historic questions in Ecuador is that so far we have not been able to change the type of politics we have. It always remains under individual leadership . . . the caudillismo [strongman paradigm] does not allow for the possibility of making collective decisions with the Ecuadorian people.

“Imagine political programs that we the people have really dreamed of on the road to transformation. [Our programs] have fallen by the wayside, because they are always surrounded by the large economic groups or by political interest groups that finally end up turning the wheel and driving for their interests.”

Many in Ecuador would agree that without the unity of all progressives it will be hard to stop the establishment of a much more fascist, racist, sexist, xenophobic and regionalist neoliberal authoritarian regime. In other words we need an accord which includes the Indigenous peoples and the people: Afro-descendants, students, workers, ecologists, feminists, LGBTQ+, socialists and communists.

For a source in Spanish giving background on October 2019, see “Outburst: Rebellion of October in Ecuador”