With the world spotlight currently on the forced sterilizations of migrant women inside the ICE detention center in Georgia, the release of the documentary “Belly of the Beast” is timely. The film, by Erica Cohn, exposes the inhumane and illegal practice of sterilizations inside the Central California Women’s Facility, the largest women’s prison in the world. The crime of nearly 150 sterilizations over a four-year period is told by Kelli Dillon, an incredibly brave formerly incarcerated woman who suffered illegal sterilization herself. 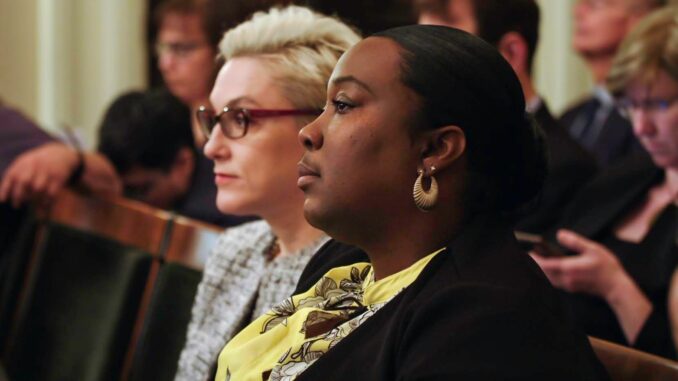 CCWF, where a death row for women is located, has a prison hospital. CCWF had also been a prison where HIV-positive incarcerated women were segregated and dying at alarming rates. For decades, this prison has been the subject of protests, a major class action lawsuit and federal receivership, all targeting the abysmal, criminally negligent care received by women and trans people inside.

“Belly of the Beast” focuses on the testimonies of women inside CCWF who were victims of involuntary sterilizations. The film shows extensive interviews with Dillon, who blew the whistle on this crime. Between 2006 and 2010, CCWF doctors and medical staff were responsible for coercing and tricking women into signing consent forms while they were on an operating table receiving unnecessary and costly c-sections during childbirth. According to “Belly of the Beast,” more than 1,400 sterilizations occurred at CCWF from 1997 to 2013.

These stories only came to light due to the tireless and selfless work of attorney Cynthia Chandler, founder of the public interest law office Justice Now. Justice Now investigated medical neglect claims and championed the rights of incarcerated women inside CCWF, as well as in Valley State Prison when it was still a women’s prison. In the film, Chandler is joined by Corey Johnson, a reporter from the Center for Investigative Reporting, who helps publicize the story.

The film interviews Kelli Dillon, a woman imprisoned for killing her abusive partner, who physically injured both her and her two children. Dillon poignantly describes the pain of separation from her children during her incarceration. She says, “I’m trying to remember what my children felt like … what their skin … their breath felt like.”

One day she goes into the prison hospital for the removal of a cyst on her ovaries. The doctor asks if she wants a tubal ligation and she says no. The prison doctor illegally sterilizes her, without her consent or knowledge. She only finds out about it later when she realizes that she has not had her period for a long time. In the film Dillon says, “I’ve always been a fighter but I wasn’t truly birthed until I was in prison.”

Chandler and Johnson, along with Dillon, joined forces to expose the illegal sterilizations. They found that prison administrators, the medical establishment and even the Federal Receiver knew about these illegal practices. Some even tried to justify the sterilizations by calling these women criminals who shouldn’t raise children. “Belly of the Beast” also documents the ugly, genocidal role of California doctors in the racist eugenics movement in this country.

The documentary ends with the passage of SB 1135, signed into law in 2014, which prohibits sterilization of incarcerated women as a form of birth control in California. “Belly of the Beast” is an amazing story of struggle on both sides of the walls. The film leaves one with the realization that the only way to win true justice is to tear down those prison walls once and for all.

For information about “Belly of the Beast” and how to organize a community showing, check out their website at www.bellyofthebeastfilm.com.