A powerful and forward-planning Workers Assembly Against Racism was held at Union Square in New York City on Oct. 18. Participants projected the possibilities of workers’ power through general strikes, shutdowns and mass actions to dramatically push back ongoing attacks — including police and racist violence, evictions, lack of stimulus money, lack of protective gear and tests, and a threatened fascist electoral coup within the current dysfunctional system. 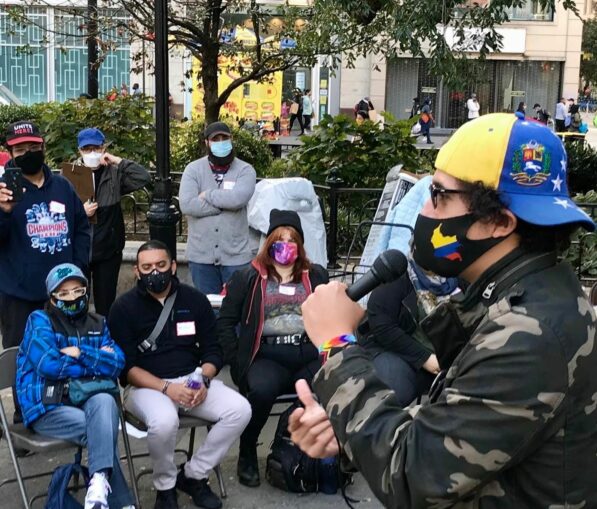 There was a great deal of unity behind a call to build for a mass action on Saturday, Nov. 7, four days after the presidential election, as a time that a workers’ intervention in an unfolding crisis would resonate.

The assembly, co-chaired by Terrea Mitchell and Joan Hwang of Peoples’ Power Assembly NYC and Lorraine Liriano of Call to Action on Puerto Rico, was opened by Larry Holmes of Workers World Party, who spoke on the potential of a Workers Assembly Against Racism.

Approximately 70 community activists participated, including Chris Silvera, secretary-treasurer and principal officer of Teamsters Local 808, and Charles Jenkins of Transport Workers Union Local 100 and president of the NYC chapter of the Coalition of Black Trade Unionists. These speakers emphasized the ability of workers to intervene decisively.

Mahoma Lopez of the Laundry Workers Center and Eliana Jaramillo of the Street Vendor Project focused on demands of migrant workers. Margaret Kimberley of Black Agenda Report and Omowale Clay of the December 12 Movement raised the systemic racism not addressed in elections. The enormity of the current crisis that requires an urgent mass response was the focus of remarks by Jessica Schwartz of New York Community Action Project, Rafael Agosto Miranda of Boricua Resistencia Nueva York, as well as by Lucy Cruz, Tsehai Hiwot, Comrade Shahid, Sara Flounders, Tony Murphy, Yhamir Chabur and others.

Speakers emphasized the power of the mass shutdowns and rebellions which followed the racist police murders of George Floyd and Breonna Taylor and the dramatic work shutdowns by professional athletes, all of which demonstrated the growing consciousness for continued mass action.

The recent call by Labor for Black Lives for mass work stoppages and the call for a general strike by the Rochester (N.Y.) Labor Council if Trump tries to steal the presidential election affirm the need for a workers’ response far more decisive than voting.