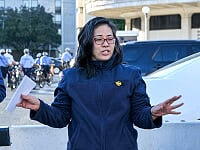 Nancy just after being released from jail Oct 9.

Philadelphia — Nancy Nguyen, Executive Director of VietLead, a Philadelphia-based Vietnamese refugee organization, was handcuffed and arrested Oct. 8 as she was changing her one-year-old baby’s diaper in her Philadelphia home. Her arrest involved the cooperation of several federal and local agencies, including the Philadelphia Police Department — in a city that claims sanctuary status.

Her so-called crime? Not murder, not kidnapping, nothing to do with drugs, no violence was involved, not even property damage. Her actions weren’t even a felony. The “crimes” that set several law enforcement agencies in motion were — littering and trespassing — 250 miles away in Richmond, Va., a month earlier.

Arrested for organizing for migrants, refugees

On Sept. 8, migrant and refugee activists in cities from Little Saigon, Calif., to Miami to Washington, D.C., denounced newly-installed Immigration and Customs Enforcement director Tony Pham. Two dozen organizations signed a statement condemning Trump’s appointment as a racist maneuver. They demanded Pham “bring human rights home” by addressing ICE’s many abuses: “We raise our voices as refugees and the descendants of refugees — from Viet Nam, Haiti, El Salvador, Honduras and Guatemala . . . as witnesses of the wretched treatment of our refugee sisters and brothers from around the world by the Trump administration, by U.S. Customs and Border Protection and by ICE.” (tinyurl.com/y3pf96lp)

A few activists descended on Pham’s home near Richmond, Va., to plant tombstones and signs on his lawn exposing ICE’s incarceration of migrant children. The head of ICE, which is guilty of imprisoning children and subjecting incarcerated migrant women to forced sterilization, responded with crocodile tears that protesters could “target a mom and target children” at his home. (WRIC.com/news, Sept. 15)

In line with President Trump’s many Twitter calls for protesters to be punished, Pham and other government officials at several levels conspired to arrest Nguyen, threatening to extradite her to a Virginia jail.

In response, VietLead, Juntos and other migrant and refugee organizations and their supporters mobilized and pulled together jail support outside police headquarters, where Nguyen was being held in one of dozens of cold and crowded basement jail cells. The Philadelphia Police Department repeatedly gave the public misleading and false information to deter efforts to free her. A nationally organized media campaign #FreeNancy resulted in hundreds of phone calls to city and police officials. She was finally released 21 hours after her arrest.

Tony Pham, of Vietnamese descent, was named head of ICE on Aug. 25. At a protest of his appointment, Cat Bao Le, executive director of SEAC Village — a South East Asian American community in North Carolina — said that the strategy of using “people that appear like they come from the community” was a well-known tactic of police, ICE and other agencies.

“We know that Tony Pham is being used as a puppet of this white supremacist regime. . . . Tony Pham is not our family, and he does not represent us.” Directing her comments to Pham, Cat Bao Le continued, “We will not let this administration use Vietnamese refugees as a wedge to further divide us from our siblings.” (tinyurl.com/yy2cdjqv)

Pham, his mother and two sisters were put on a plane to the U.S. 11 days before the liberation of Saigon in 1975. His father, a military general in the U.S.-supported puppet regime of South Vietnam, fled to the U.S. soon after.

Tin Nguyen, board member of SEAC Village, said, “Let’s be clear, if Tony Pham tried to come to the United States today, he would be rejected by the same Trump administration he works for.” (tinyurl.com/yycshyyc)

The attack on the leader of VietLead is a threat leveled at all activist organizations, a warning that federal government officials are raising the level of repression.

Nguyen’s arrest and incarceration reveals that, from ICE on down to local city police, the state is threatening working class, Black, Brown and migrant leaders who resist the inhumanity of the current administration in Washington.

The misdemeanor charges against Nguyen are an attack on the constitutional right to assembly and free speech — the people’s right to protest. The charges must be dropped now!