Ted Kelly: We’ve talked about the fascist plot in Michigan [where neo-fascist militias planned to kidnap and kill Democratic Gov. Gretchen Whitmer]. We’ve talked about the increasing danger against our trans brothers, sisters and siblings, against the tens of thousands of im/migrants in U.S. concentration camps who are  suffering everything from death in the pandemic to forced sterilizations. So — Is Trump fascist? And if he’s fascist, should we not be uniting with the Democrats to stop Trump? What do we do if Trump doesn’t concede? Or worse yet, what do we do if Trump wins? These are questions that I think are on the mind of the working class right now. 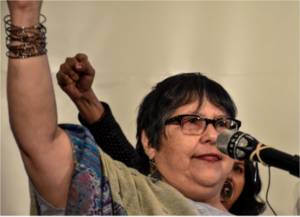 Teresa Gutierrez: I think Trump is a fascist. If it walks like a duck and talks like a duck, it’s a duck. But we’re not living under a fascist system. That’s the difference. If we were living under fascism, we would not be able to have this meeting. Fascist actions are happening — that’s for sure. But we’re not living under fascism yet. I do think that there is an element of the ruling class that is getting ready for fascism. We don’t know, we’re not in the boardrooms where we can hear these things. But we have to be prepared for anything.

That’s one of the reasons why it’s so important to be revolutionary internationalists. There are many activists who don’t see the fact that many of our problems could be solved by taking money away from the Pentagon. The money that’s going to “defense” and U.S. war could be used for COVID relief, for health care, for education and so forth.

But you can’t vote away imperialism; you can’t vote away fascism. You have to uproot it, and that’s an intense struggle. I have had the privilege of traveling and meeting many activists and revolutionaries from around the world, specifically in Latin America. We have sisters and brothers and family there who have experienced fascism, like our Chilean comrades under President Augusto Pinochet, who was a fascist. Hundreds of thousands of workers were massacred in Chile.

We learn from these comrades what it takes to stay in the struggle day after day, night after night. This is why we have to be internationalist — because our comrades and sisters and brothers and family from around the world have experienced the naked arm of capitalism. They have so much to teach us, and there is so much we can learn from them.

This is why we have to always raise that there are no borders in the working-class struggle. We’re not just caring about the working class in the United States. We care about every single worker. Especially because U.S. imperialism has created the conditions that have forced people to leave their homelands. 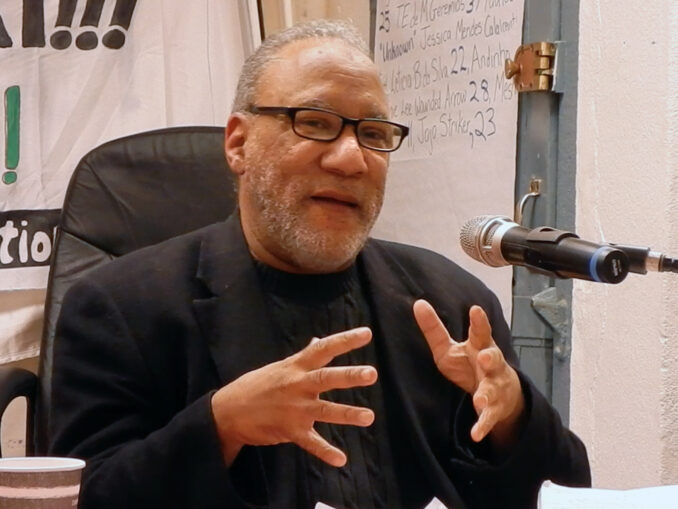 Larry Holmes: From a Marxist perspective, fascism is viewed differently depending on who you are in society. To us, what’s a fascist? A fascist is someone who is violently racist, violently homophobic, violently anti-working class, wants to crush unions, wants to smash the oppressed, smash migrant workers, carry out wars both beyond the borders of the U.S. and inside the border.

From the point of view of the bourgeoisie, they’ll say a fascist is someone who wants to negate bourgeois democracy and be a tyrant, be an authoritarian leader, dismiss Congress and issue edicts, and so forth.

What Marxists understand is that fascism does not come from some ideology. It’s not born in the heads of people, neither the ultrareactionary nor the police state part of it.

Fascism is a desperate, extreme response to a huge crisis in the capitalist system. And the bourgeoisie argues among itself: “How are we going to save our system?” Some will say, “Well, this is so bad that the only way we can save the system is to mobilize some social base — the petty bourgeoisie, small business owners — and try to infect some of the working class with racism and homophobia and sexism. Go back to the past when the oppressed couldn’t even lift their head. And do whatever is necessary to smash the unions and smash the working class and divide it.”

Fascism for the bourgeoisie is an extreme, painful solution to what they believe to be a terrifying existential crisis for their system — as in, if they don’t do something extreme, they might lose their system!

I believe that the whole bourgeoisie is like Trump. It’s just that Trump lets it all hang out. But the bourgeoisie say the same things. All of the sexist, abominable s-h-i-t that he says — they say it amongst themselves. Trump realizes there’s a sector that he can reach, that he can mobilize on that basis, by being “honest” and calling for attacks on the oppressed.

We need the real strategy for defeating fascism — which is organizing on a working-class basis for mass class struggle — the workers and the oppressed against the capitalist system! First in small ways, in uneven ways, based on where you are, but as time passes, in bigger, more coordinated ways. This is the lesson that comrades and leaders in the communist movement learned during the 1930s in Italy, in Germany, in Spain, and in different ways, in Chile and in Greece, not just now but fifty years ago. The big historical examples are Hitler and Mussolini, but they are by no means the only examples.

This is a turning point for those who view themselves as radical socialists, communists, anti-capitalists, who orient toward the working class. This is about the importance of the class struggle and the necessity to do what we must do to organize our class. That’s a lot of work. But who said that anything important would not be a big challenge and a lot of work?

Teresa Gutierrez: On fascism, people should take note of this: Comrade Fidel Castro always said that fascism would not come to the United States. And I believe him. It has to do with the people of this country. We hate this government. We hate this system. But we love our working class. And our working class is not going to allow fascism in this country. Fidel believed that, and I agree with him.

Young people know that there is no hope under capitalism, and that’s why a sector of them were for Bernie Sanders, who was an open “socialist.” If the Democratic Party wanted a symbol of change, they would have selected him. (Yes, he’s an old white man; they can’t seem to get away from that!) But he was for Medicare for All, and choosing him would have been a nod to the base of the party that was organizing and angry with capitalism.

But the Democrats didn’t do that, and they couldn’t do that because they are too beholden to Wall Street. The Democratic Party may look different — it may look more Black, more Brown, more union, but it is, just like the Republican Party, beholden to Wall Street. Workers World Party understands that there are immigrant rights activists and union activists who have a little bit of hope that if they vote for Biden, this fascist, sexist, white supremacist president will be defeated. And he should be defeated. We’re not at odds with those sentiments among people who are fighting for their community. We’re not at odds with them.

If the Republican Party and Trump have called for police and right-wing militias to go out to terrorize voters at the poll, I think we should be out there to defend Black and Brown people who may be voting. Imagine! Republicans calling for the very police who killed Breonna Taylor to go “monitor” the voting sites — many of which have already been closed by the Republicans. We defend the right of Black and Brown and working class people to vote. I’m proud of our Party for taking that position.

But Nov. 3 to Jan. 20 could be a sh-tstorm in this country. We know Trump’s hubris. We know the Democrats are not capable of fighting him. And we know that the only transfer of power we must be concerned with is the transfer of power to the people.

So on Nov. 4, the day after the election, we have to be hitting the streets to organize for COVID relief, to stop police terror and for all the other demands for liberation of workers and the oppressed. That’s our program. That’s what we’re fighting for. We’re asking everyone to join us in this fight.