Another 1.3 million people filed for unemployment benefits during the week of Sept. 28, adding to the ranks of the 12 million workers still jobless due to the pandemic. They and their families have lost health insurance, not provided by this ruthless capitalist government. Evictions and homelessness are on the rise. Food lines are everywhere.

Yet no pandemic rescue plan is in sight. Despite the suffering of millions of workers and their families, the Democrats and Republicans cannot come to an agreement. Especially hard hit are Black, Latinx, Indigenous, immigrant and low-income workers. Undocumented workers deserve assistance, but this racist government denies them any aid, even medical care or food stamps. 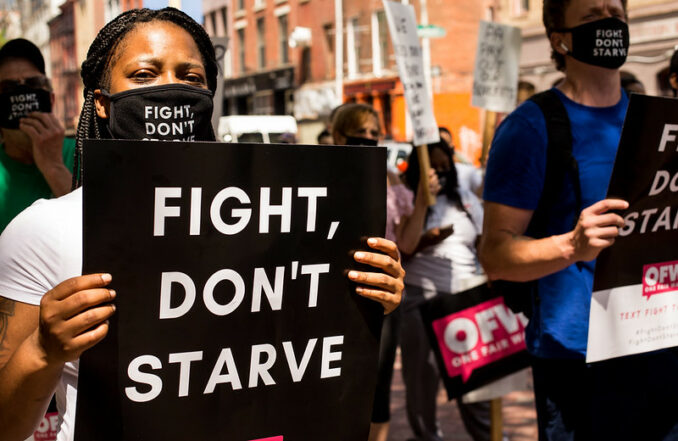 October 5 marked the tenth week since laid-off workers receiving unemployment benefits failed to get the extra $600 weekly federal benefits that expired at the end of July. Right-wing politicians refused to agree to it. Even more workers have lost jobs since the White House halted stimulus talks on Oct. 6. That trend will continue if the pandemic spikes again and businesses close. (Economic Policy Institute, Oct. 8)

Job growth slowed in September, with many furloughs becoming permanent and the “recovery” losing steam. While some companies are hiring, others are laying off. EPI says there are 6.6 million more unemployed people than job openings and warns that without further aid to state and local economies, millions more jobs will be lost.

This denial of funding comes at a time when half of those laid off during the pandemic are still jobless, while 60% of those still working who took a pay cut have not regained their former salaries. The labor market “recovery” has bypassed Black, Latinx, low-income and young workers, who were disproportionately laid off or paid reduced wages. Some 56% of laid-off low-wage workers are still unemployed. (Pew Research Center, Sept. 24)

The jobless rate declined to 7% in September for white workers, but 12.1% of Black workers, 10.3% of Latinx workers and 15.9% of young workers are still unemployed. (Bureau of Labor Statistics, Oct. 2) White workers are being rehired twice as quickly as Black workers due to entrenched racism. Many laid-off Black workers have joined the ranks of the 3.8 million who permanently lost their jobs as of last month.

Jerome Powell, chairperson of the Federal Reserve Board, reacting to President Trump’s order to stop rescue plan talks, warned that if the virus spreads, more businesses will close and the economy will tank. His concern is not about workers suffering but about companies losing profits as the economy contracts. At the core, he and the capitalist class fear growing mass anger by the multinational working class and political instability.

One group has fared quite well during this pandemic — the 2,189 billionaires whose combined wealth soared 27.5% between April and July to a record $10.2 trillion. UBS bank reported Oct. 7 that the rate of growth soared during the coronavirus crisis in the technology, health and industrial sectors. (UBS.com, “Riding the Storm”) Health industry tycoons raked in the most, spurred on by various innovations and COVID-19 treatments and equipment.

While much of this wealth was obtained through betting on the global stock market recovery after the virus peaked, it helped that the U.S. ruling class has one of their own in the White House, who cut their taxes and connived to undermine workers’ rights and labor unions. President Trump not only didn’t “drain the swamp” of corporate lobbyists and magnates, he “reinvented it.” (New York Times, Oct. 11) 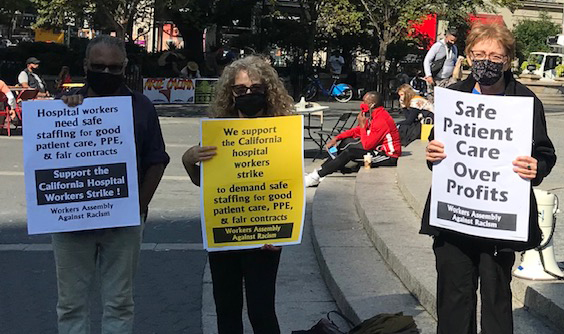 Health care workers and others rally Oct. 7 in solidarity with California nurses’ strike and to build a Workers Assembly Against Racism. New York City. Go to www.shutdownracism.org

This obscene wealth is an insult to the millions worldwide infected by the coronavirus. Over 8 million have been sickened in the U.S., and 220,000 have died — mainly Black, Latinx and Indigenous people, plus disabled individuals and seniors. It’s a slam at “essential workers” and courageous medical workers who jeopardize their lives to save others. Over 1,700 health workers have died from COVID-19. (National Nurses United, Sept. 28)

There’s a crying need for another rescue plan. Some 78 million adults are having difficulty paying for basic necessities due to long-standing inequities, “often stemming from structural racism,” in employment, housing and health care. This has intensified with the pandemic. Nearly half of Black and Latinx families are having trouble paying basic bills, compared to one-fourth of white households. (Center on Budget and Policy Priorities, Oct. 7) They are twice as likely to fall behind on housing payments and lack emergency funds.

The COVID crisis created a hunger crisis as parents lost incomes. Food lines extend for blocks. An estimated 54 million people, including 18 million children, many no longer receiving healthy school meals, aren’t getting enough to eat. One in eight households lacks adequate food, with Black and Latinx families twice as likely as white households to go without. (New York Times, Sept. 2)

More pain is projected for the multinational working class, which has recouped only half of the 24 million jobs lost in the spring. Corporations say that due to the pandemic crisis and the lack of more federal stimulus money, they must implement massive job cuts. Omitted from the financial news is that businesses are also shrinking their workforce in reaction to the global capitalist economic crisis.

Business Insider’s list of implemented or projected corporate layoffs adds up to a  stunning tens of thousands of jobs lost. Disney is cutting 28,000 jobs. United and American airlines furloughed 32,000 workers on Oct. 1 Numerous other companies are eliminating workers. (tinyurl.com/y54at7yg)

Sara Nelson, president of the Association of Flight Attendants-CWA, represents 50,000 workers, 75% of them women. She told MSNBC on Oct. 10 that furloughed workers are desperate; some are homeless. They are waiting for a government rescue plan, as the union had an agreement with the airlines that jobs and employee health insurance would be retained if a deal came through.

Women, many Black, Latinx and immigrants, make up the majority of “essential” workers on the front lines at medical facilities, providing childcare, staffing big box stores and volunteering at food pantries.

The viral disaster has exposed gender inequities and widespread racism in the system, acutely impacting women workers of color. The pandemic eliminated many of women’s jobs in health care, education and transportation. By April, 16.2% of women were out of work, compared to 13.5% of men. (NBC News, June 8)

Due to “occupational segregation,” many Black and Latinx women toil in the hospitality, food service and retail industries with low pay and little to no job security. Many struggled to make ends meet even pre-pandemic. These sectors were the first hit by COVID-19. Shutdowns, layoffs, even collapses followed. By May, 20% of Latinx and 16% of Black women workers were unemployed.

With many schools and daycare centers now closed, women have more parenting responsibilities. Some are reducing work hours to help their children with remote learning. Single mothers must do it all. The economic and parental burden is staggering, but no government help is on the horizon.

From August through September, of the 1.1 million individuals who dropped out of the labor force, 865,000 were women, including 324,000 Latinx and 58,000 Black women. (National Women’s Law Center) Their reasons: unavailability or insecurity of jobs, the gender wage gap — especially severe for women of color — and childcare. The unemployment rate for Black and Latinx women workers is now 11% and rising.

Kristin Rowe-Finkbeiner, co-founder of Moms Rising, stressed: “The big numbers we’re seeing in the news are not showing the actual tragedy below that: intense wage discrimination, compounded by structural racism that moms of color are experiencing right now.” (Boston Globe, Oct. 2)