After police murders of George Floyd in Minneapolis and Breonna Taylor in Louisville, Ky., demonstrators across the U.S. called for defunding police departments. The Center for Popular Democracy Action, in a June 10 report, estimates $100 billion is spent each year in the U.S. on policing — between 20% to 45% of municipal budgets. (tinyurl.com/yy8ro8lf) 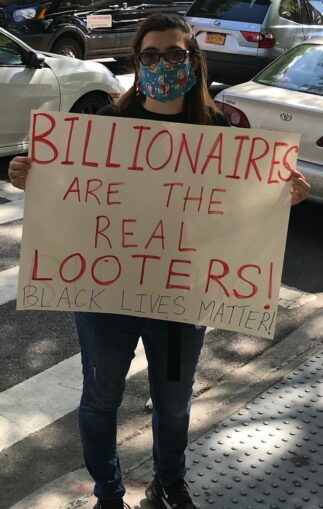 Black Lives Matter protesters in Queens on May 30

As activists target state and municipal funding sources, it is important to shine the spotlight on often hidden corporate police funding. A popular street chant against the police has been “Who do they protect? Who do they serve?”

Another question must also be asked: Who protects the police?

Municipal police budgets are subject to public scrutiny and must be approved by elected officials. But private charities and police foundations do not fall under freedom of information laws. Set up as nonprofit “charities,” these secret slush funds hide the names of donors from public oversight, so that wealthy donors can influence police priorities, including contracts for equipment purchase.

It is possible that SWAT tank turrets used to shoot pepper spray onto protesters during demonstrations this summer were paid for through donations to the police by Target, Walmart, Starbucks, Coca-Cola or a convenience store conglomerate like Wawa or 7-Eleven.

Some of the new high-tech surveillance software and equipment used by police came courtesy of Amazon, Microsoft, Google or Facebook. In 2007, the Los Angeles Police Foundation, with a $200,000 gift from Target Corp., provided the LAPD with controversial software from Palantir, a data analytics company launched with CIA funding. (Huffpost.com, June 25)

The Philadelphia Police Foundation removal of references to donor corporations stemmed in part from student protests at Temple University and the University of Pennsylvania, both reported to be major contributors. These schools have since withdrawn support, although Drexel University maintains a connection to the foundation. Media outlets Comcast and Philadelphia News 6ABC still have members on the foundation board.

The University of Virginia sponsors the local police foundation in Charlottesville, Va., site of the infamous 2017 “Unite the Right” rally, where anti-racist protester Heather Heyer was killed when a white supremacist rammed a car into a group of protesters.

When the NYPD was under orders from a federal judge to put 1,000 body cameras into use in 2013, the police foundation “gifted” them with demonstration cameras produced by two of its donors — Taser and VieVu. Both companies made the list of top contract bidders, with VieVu awarded the bid.

Verizon and AT&T have partnered with the National Sheriff’s Association to lobby Congress to make the Defense Department’s 1033 Program permanent. (Readsludge.com, June 4) Since 1997, that program has shipped over $7.4 billion in “excess” military equipment to over 8,000 law enforcement agencies. (Wired.com, June 2)

PAI details how Chevron, Shell and other oil giants exert their influence by sponsoring public fundraising events for police and providing corporate executive personnel to serve as directors of police foundations. The report states: “Many powerful companies that drive environmental injustice are also backers of the same police departments that tyrannize the very communities these corporate actors pollute.” (theguardian.com/UK, July 28)

Chevron is involved with police foundations in Houston, New Orleans and Salt Lake City. Shell, one of the world’s biggest fossil fuel companies, is a “featured partner” of the New Orleans police foundation. Marathon Petroleum, the largest U.S. oil refining company, is on the Detroit police foundation. PAI notes that Marathon’s refinery in Detroit has received 15 environmental violation citations since 2013.

During the Black Lives Matter protests this spring, athletes in every major sport staged strikes and other job actions in support. Yet in many cases, team management and franchises continued to participate in police funding foundations.

In Seattle, the MLB Mariners have someone on the board of the city’s police foundation board, and the NFL Seattle Seahawks donate to the foundation. In Detroit, the management of the National Football League Lions, National Basketball Association Pistons and Major League Baseball Tigers each have a representative on the Detroit Public Safety Foundation board of trustees. (Readsludge.com, June 4)

There are members from the MLB Tampa Bay Rays and the NFL Tampa Bay Buccaneers on that city’s police foundation. The NBA Dallas Mavericks are corporate-level sponsors of Friends of the Dallas Police. And the owner of the New York Mets is on the board of trustees for the New York City Police Foundation.

But targeting individual corporations for their support of police is not enough. The movement must indict the entire capitalist system, including the corporate power that funds and relies on the police to protect the rotten racist economic system.