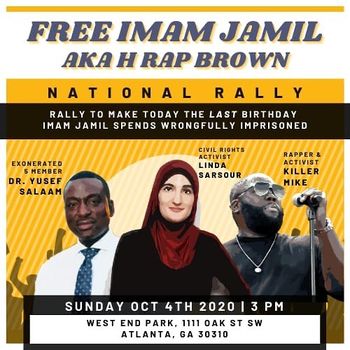 Oct. 4 – Supporters of a new trial for Imam Jamil Al-Amin (the former H. Rap Brown) gathered in the West End Park today to mark his 77th birthday and to declare this will be the last birthday he spends unjustly held behind prison bars.

Through the initiative of the Islamic Council of North America and Students for Imam Jamil, the rally was held in Atlanta as well as in other cities on Al-Amin’s Oct. 4 birth date.

On stage in front of a mural of Imam Jamil prominently visible in the park, a number of speakers proclaimed support for his freedom, including rappers T.I. and Killer Mike, who both live in Atlanta, and Linda Sarsour, outspoken activist for Palestine and for justice for Breonna Taylor.

Kairi Al-Amin, Jamil’s son, is a lawyer like his mother, Karima Al-Amin. He emceed and delivered an account of the frame-up charge that the imam had killed a deputy sheriff and wounded a second officer on March 16, 2000, as well as the government misconduct charges in the 2002 trial. Dr. Yusef Salaam, one of the exonerated Central Park Five, also spoke in support of a new trial for Jamil.

The invigorated effort to win a new trial springs from the creation of a Conviction Integrity Unit in the Fulton County District Attorney’s office to review past trials where there is evidence of injustice. A glaring example of injustice in Al-Amin’s case is the admission by Otis Jackson that he himself was in fact the shooter.

A fighter for justice and self-determination

Whether identified  as H. Rap Brown or Imam Jamil Al-Amin, this Black liberation fighter has been consistent in his efforts to bring justice and self-determination to oppressed and exploited people.

As a young leader of SNCC (Student Nonviolent Coordinating Committee ) in the mid 1960s, he was well-known for courageous and effective organizing in rural areas of Alabama and Mississippi to gain voting rights for Black people, despite life-threatening intimidation by the KKK and other segregationist forces.

Following his conversion to Islam, Al-Amin moved to Atlanta and established a masjid – across the street from where the rally was being held – in a community that was besieged by drugs and violence. He is widely credited with establishing programs that brought peace and security to the neighborhood and transformed the lives of many youth.

A petition for a new trial and more information about his decades of work can be found at whathappend2rap.com and ImamJamilActionNetwork.org.