Bahria Town, one of the largest private real estate development companies in Asia, is known for its overly opulent master-planned communities constructed for Pakistan’s ruling class — and for its intimidation tactics that target Indigneous and Aboriginal peoples. 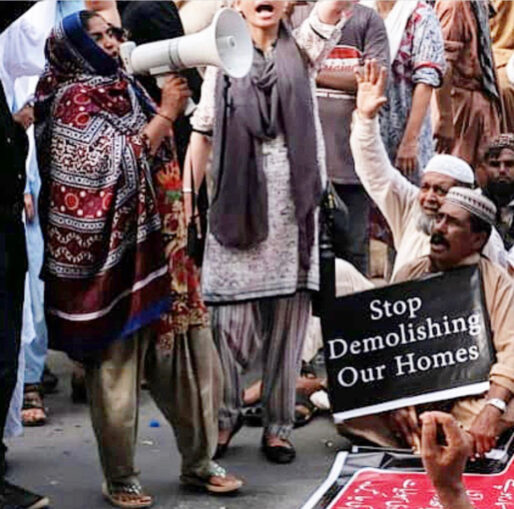 Residents whose homes are scheduled to be demolished protest outside of Karachi Press Club.

Like all corporations, greed and resource exploitation fuel Bahria Town’s robbing of Indigenous folks’ ancestral land, and its structural violence against Pakistan’s most oppressed groups. Indeed, Bahria Town’s acts of horror are extensive.

To accomplish its 45,000-acre luxury housing development endeavor in Karachi, Bahria Town has used state-endorsed violence to remove Indigenous farmers from their homes.

On March 19, 2016, police invaded the small village of Juma Morio Goth, and demolished many homes to clear the way for a Bahria Town road. An interviewee in Dawn magazine stated: “The job was quickly completed and the rubble hauled away while hapless villagers looked on in a daze, knowing full well there will be no justice for them.” (April 18, 2016)

Bahria Town has not just destroyed homes, it has also desecrated graves. The Guardian reports that after the company’s devastation in 2019, “The graveyard in Usman Allah Raki Goth remains partially destroyed.” (July 8, 2019)

While a few graves are somewhat visible among the destruction, it’s clear that Bahria Town’s fountains and sculptures now occupy sacred space where graves used to be.

This development company’s involvement in structural violence takes even more insidious forms. Many villagers live in District Malir, an area where Bahria Town has constructed a massive housing project that depends on underground water aquifers for survival. Mohammad Saleem, president of the Voice of Indigenous Community Empowerment, stated that wells drilled by Bahria Town are rapidly draining the underground water supply. (Dawn, April 18, 2016)

Cutting off a community’s access to water is fundamental to systematically eliminating their existences on their land.

Most recently, on Oct. 2, Karachi Bachao Tehreek reported that personnel from Bahria Town and police violently entered Haji Ali Mohammad Goth, a village in Karachi, and attempted to forcefully remove Indigenous farmers from their homes. Those who serve the ruling class brought bulldozers and excavators to coerce and intimidate Indigenous folks into surrendering their land to Bahria Town.  (KBT Instagram, Oct. 2)

KBT noted that “the villagers’ land ownership and use rights” are legally recognized and afforded protection under the law. Bahria Town’s unfettered continued attacks on Aboriginal people demonstrates the state’s obvious disregard for Indigenous rights and mirrors the mindset of other oppressive forces.

The attacks by Bahria Town mirror worldwide attacks by capitalist forces on Indigenous peoples and their rights.

This year the U.S. government resumed federal executions after a 17-year hiatus, and legally lynched Lezmond Mitchell,  the only Indigenous person on federal death row. (Workers World, Aug. 26). Mitchell was a Navajo Nation member, and was sentenced to death for a crime committed on tribal land.

The Navajo Nation’s sovereignty is supposedly federally recognized, with its leaders the ones to determine whether to apply the death penalty to offenses under the Federal Death Penalty Act. But before Mitchell was killed, the federal government denied the Navajo Nation’s request to halt his execution. Moreover, the state’s actions reflect that its systematic harm, which targets oppressed communities, including Indigenous peoples, is limitless.

Prior to Mitchell’s execution, the Navajo Nation expressed its solidarity with Mitchell and openly condemned the federal government’s actions against a member of their community.

Those dedicated to the struggle are aware of forces acting against them, as they simultaneously focus on their acts of resistance and solidarity. 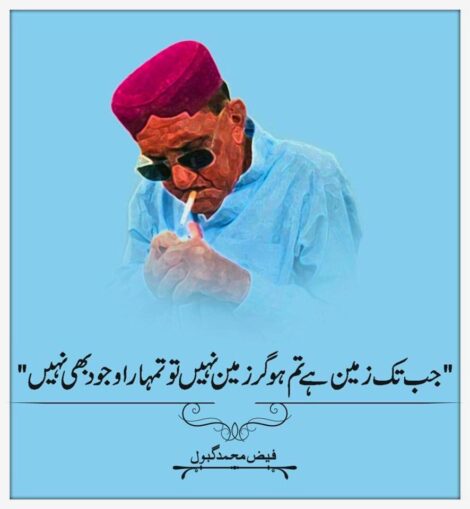 “As long as the land is there, you are there. You cannot have existence without land.” Chacha Faiz Muhammad Gabol.

The late Chacha Faiz Muhammad Gabol, an Indigenous activist, refused to sell his land to Bahria Town and explained, “I told Malik Riaz [the founder of Bahria Town] that the ground is our mother. Would anyone sell their mother? Darthi, land, is our mother. This soil is precious to me.” (“Say No to Bahria Town —  The Land Build with Perfect Corruption,” telefeeds.com, July 27)

Abira Ashfaq, a people’s lawyer in Pakistan, provided insight on the strategies Bahria Town is using to further disenfranchise Indigenous communities, at Chacha Faiz Muhammad Gabol’s Remembrance Day event on Feb. 25. Ashfaq stressed that the tactics parallel those used by British imperialists to create divisions among the masses. (tinyurl.com/y2xsd6my)

Deep solidarity with Indigenous peoples means solidarity with all who continue to disrupt and expose efforts by the ruling class to seize, desecrate and demolish Indigenous peoples and land. Liberation is inherently tied to those who are committed to working against state-sanctioned violence, who are fighting the same fight against neo-colonial and imperialist forces.

Say “NO” to Bahria Town!