According to The Intercept, the FBI is now so “concerned about the infiltration of law enforcement by white supremacist groups and its impact on police abuse and tolerance of racism” that on Sept. 29 it released an unredacted version of  agency surveillance about the infiltration, which supposedly started in 2006. (Sept. 29) 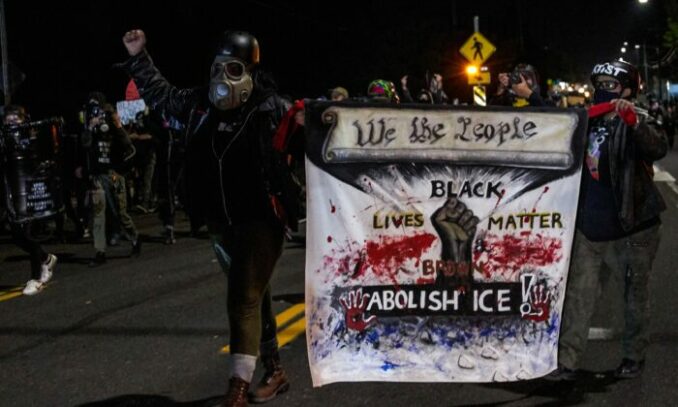 The people of Portland, Ore., march against racism and fascism on the city’s 100th continuous day of protest, Sept. 5.

It is difficult to credit the FBI with “concern” when none of its reports on this racist activity were previously made public in full. Coverup may be more appropriate.

Redacted versions of the report had previously been published, yet the FBI has not once sounded an alarm to prevent the numerous police murders of Black and Brown people, which have gone on for too long. Perhaps local communities alerted in such a way might have acted sooner to stop racist abuses of authority and saved Black and Brown lives.

The Atlantic has also written extensively about FBI reports on the escalating pre-election danger of specific far-right groups, whose members include trained professional police and soldiers who are Trump supporters. (theatlantic.com, Nov. 2020)

That racism is deeply embedded in most U.S. police departments should come as no surprise to anyone familiar with the historic origins of police in this country – linked to the slave patrols sent after enslaved Africans who were seeking freedom from bondage.

In the Sept. 29 debate with Joe Biden, Donald Trump was challenged by moderator Chris Wallace to denounce white supremacists. Trump not only refused to do so, he rallied his supporters in white supremacist groups like the Proud Boys by using a military command term, “Stand back and stand by.”

In other words, Trump as Commander in Chief of the U.S. armed forces was saying to vigilante white supremacists: “Be ready to act on my future orders.” Days before the debate, the top two Department of Homeland Security officials, testifying in congressional hearings, acknowledged that white supremacists pose the most lethal threat to the U.S. (Reuters, Sept. 29)

Trump called on his far-right supporters to turn up on election day and beyond to secure his continued rule, regardless of the voters’ choice. Even before commanding the Proud Boys during the debate, Trump had been championing his support from law enforcement groups, including the Fraternal Order of Police in Philadelphia.

Despite the widespread murders of people of color by police, Trump and those in his administration have made it clear that violent white supremacists are a valued part of Trump’s base, especially those within the police.

For instance, in Philadelphia in mid-July, members of the Proud Boys showed up for a party at FOP headquarters after a speech by Vice President Mike Pence during a “Back the Blue” event. Philadelphia police have come under heavy scrutiny for social media posts supporting racism. In June, white supremacist demonstrations in the city against Black Lives Matter protesters were openly defended by police.

Trump’s recruitment of police support is a direct response to the widespread outrage against police brutality in the aftermath of police murders of George Floyd, Breonna Taylor and other African American people.

Trump made his support for police violence clear on June 1 in Washington, D.C., when he used federal police forces to brutally clear peaceful demonstrators in Lafayette Square so he could stage a Bible-thumping public relations event. This was quickly followed by his unleashing of federal and unidentified police forces to kidnap anti-racist protesters in Portland, Ore.

It remains a question whether Trump can count on military support if he attempts to carry out a coup after the election, especially since many enlisted people come from Black and Brown communities. However, he can count on the overwhelmingly white police and paramilitary militia groups.

Historically, U.S. capitalists have relied on white supremacist groups to bolster their hold on power during times of social upheaval.

Case in point: In the mid-1920s, funding for the Ku Klux Klan reached an all-time high of $4 million, even when membership was dropping. The Klan was used then to terrorize Black and immigrant communities demanding inclusion during the limited period of U.S. economic prosperity following World War I, before the collapse at the end of the decade which led to the Great Depression.

Now, Trump is blatantly trying to galvanize his white supremacist base against anti-racist, anti-fascist and left protesters.

Trump has especially been targeting the loose movement against fascism known as antifa. His campaign ads claim that “antifa mobs will terrorize U.S. [white] suburbs.” It is widely known that “antifa” is a philosophy, not an organized group.

Then, on Oct. 2, Homeland Security’s U.S. Citizenship and Immigration Services issued a “Policy Guidance Regarding Inadmissibility Based on Membership in a Totalitarian Party.” This states that “membership in or affiliation with the Communist Party or any other totalitarian party” is grounds for denying citizenship.

On the surface, this may appear like another anti-immigrant attack, but it is far more serious. While Trump has frequently attempted to link Democratic Party presidential candidate Joe Biden with left-leaning elements, including Democratic Socialists of America who supported Bernie Sanders, obviously Biden is no socialist. Clearly Trump is taking aim at the political far left.

Fascism in the service of capitalism targets oppressed groups to split and divide opposition, particularly from the working class. Historically, the most serious fighters against fascism have been anarchists (antifa), socialists and especially communists.

Now, more than ever, a united fightback by all these groups is what is needed, not just to oppose Trump, but to end the increasing misery from capitalist oppression and exploitation once and for all.