Issam Hijjawi-Bassalat, a Palestinian doctor and dedicated ant-imperialist, was arrested on Aug. 24 along with nine members of the Irish Republican Party Saoradh, as a result of entrapment by the British police agency MI5. These arrests are part of the ongoing repression of the Irish Republican movement* by British military and intelligence forces. 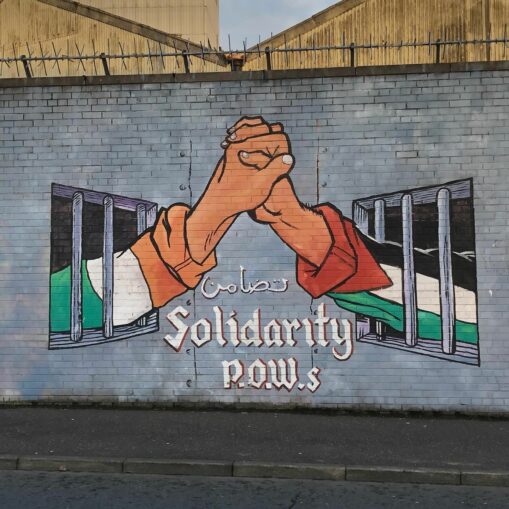 The prisoners were taken to British-operated Maghaberry Prison in Antrim, one of the Occupied Six Counties in Ireland’s northeast.  After undergoing the intial 14-day isolation now being practiced during the COVID-19 pandemic, they were taken to Roe House at Maghaberry, which is used to detain Republican political prisoners.

Due to persisting, numerous health problems, Dr. Hijjawi-Bassalat, who is 62 years old, was taken to an outside hospital for an MRI scan.  However, after the procedure he was separated from his comrades and placed in dilapidated Foyle House at the same jail — where non-political prisoners are held — instead of being taken back to Roe House. Authorities claimed that he had to undergo another 14 days of isolation to prevent the spread of COVID-19.

However, this claim is contradicted by the preferential treatment given to loyalist prisoners.  The Irish Republican Prisoners Welfare Asscociation (IRPWA) Facebook page posted a message from a Republican prisoner on Roe 4 landing at Maghaberry jail.  It states: “Issam is being needlessly held in the filth and squalor of the occupation’s Foyle House in intense pain, unable to sit or lay down. …”

The statement continues: “There is no logic to Issam being held [there] … as over the past two-week period, two loyalist prisoners were taken to outside hospitals and returned to loyalist Bush House. They were not forced to endure the 14-day, 24-hour lock-up due to ‘COVID isolation’. This is clear proof that the occupiers’ MI5-led jail administration is using the isolation of Issam as a tool to persecute Republican Prisoners.”

Cases of COVID-19 have been reported in Foyle House, too. Additionally, there is plenty of room in the Republican section at Roe House to allow Dr. Hijawi-Bassalat to be in isolation, say Republican activists.

Solidarity growing in prisons and on the streets

In response to such blatant, brutal repression, Dr. Hijjawi-Bassalat began a hunger strike on Sept. 16 to demand his return to the jail’s Republican wing. He has been joined in his strike by at least 50 Irish Republican political prisoners in both Maghaberry Prison and Portlaoise Jail in County Laois in the Free State (commonly referred to as the “Republic of Ireland”).

Women incarcerated at the Hydebank Wood Prison in Belfast began refusing food on Sept. 23, and stated: “We unreservedly support Issam in his hunger strike and his demand for immediate transfer to Republican Roe House.” (The Irish News, Sept. 24)

Activists on the outside have also committed to fasting in solidarity. The hunger strikers are continuing the struggle of Irish Republican hunger strikers, such as Bobby Sands.  Thirty-nine years ago, this hero fought to the death for political status and basic human dignity.

Dr. Hijjawi-Bassalat’s experience in Maghaberry Prison is reflective of the common experience of political prisoners — whether in Ireland or Occupied Palestine. This is true in regard to both the harsh and brutal conditions in the jails and the prisoners’ means of resistance.

Much like Irish political prisoners, Palestinians have a long history of demanding their humanity through tactics such as hunger strikes. Like their anti-imperialist comrades resisting oppression in Ireland, over 300 prisoners plan to go on hunger strike Sept. 24 to protest the appalling conditions, brutality and repression in Israel’s Ofer Prison in the Occupied West Bank. (Palestine Information Center, Sept. 22)

Solidarity actions with Dr. Hijjawi-Bassalat and the Republican political prisoners have been held in several cities in the north and in Dublin, as well as in Glasgow, Scotland and London.  IRPWA is organizing a 24-hour solidarity fast of “activists from across Ireland” on Sept. 26. They will set up a camp outside Maghaberry jail, picket the Kennedy Center in West Belfast, then travel by car caravan to the prison’s gates where they will hold a rally.

How you can help!

Anti-imperialists worldwide have a responsibility to show solidarity with political prisoners from Ireland to Palestine. They are imprisoned for us!  We are out here for them!

*Irish Republicans have fought for centuries against British imperialism and for the right of self-determination.  The loyalists, on the other hand, support and protect Britain’s occupation of the northeastern six counties in Ireland and London’s policies of global intervention, repression and exploitation.