Sept. 20 − The international media gave much more than its usual attention to the announcement by Bolivia’s interim president, Jeanine Áñez, that she was withdrawing as a candidate in that country’s upcoming Oct. 18 election. 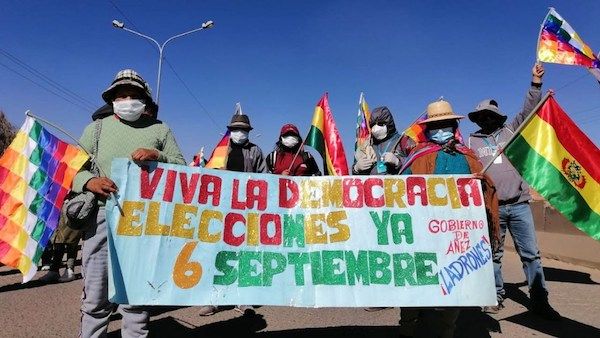 A call for democracy in Bolivia, Sept. 6.

Áñez maneuvered herself into the position of “interim president” last fall after the army and police backed fascist gangs and forced Evo Morales, Bolivia’s first Indigenous president, to resign. Morales, who leads the Movement for Socialism (MAS), had been president since 2006 and had won worldwide popular support for his anti-imperialist positions.

The U.S. government and the U.S.-puppet Organization of American States backed the coup, charging irregularities in the presidential election that Morales had won.

At that time, Áñez was senator from the northeastern department of Beni in the Amazonian lowlands, known for her right-wing positions and her connection with the pro-fascist ex-president of Colombia, Alvaro Uribe. (See workers.org/2019/11/44451/)

In her televised address to the nation last week, Áñez said she didn’t want to split the vote, as that would let “MAS win the election.”

Evo Morales, now in exile across the border in Argentina, said that Áñez had been planning to renounce her candidacy for a while but had to negotiate with the other right-wing parties to gain impunity — that is, freedom from prosecution for crimes. Morales said Áñez is responsible for “the scandalous corruption cases in the midst of the pandemic, for the massacres in Senkata and Sacaba, and for the strangulation of the economy.”

Senkata and Sacaba are both Indigenous communities. The Bolivian cops had shot and killed at least 22 protesters there in November 2019 when the mostly Indigenous population, who were strong supporters of Morales, came out into the streets to protest his forced resignation.

Under “interim President” Áñez, unemployment jumped to 11.8 percent this July from 3.9 percent in 2019. Poverty and extreme poverty, defined as living on less than two dollars a day,  increased drastically while economic growth dropped.  Bolivia was slipping back into the neoliberal wilderness that had reigned before Morales took office in 2006. Most of the 65% of Bolivia’s people who are Indigenous were poor at that time. According to the World Bank, under Morales Bolivia had moved from being classified as poor to become a lower middle-income country.

Morales and the current MAS candidate, Luis “Lucho” Arce Catacora, made a point of devoting the government’s income to meet people’s needs. They created steady economic growth and a massive reduction in poverty and inequality, combined with programs making sure the country’s natural gas, oil, and lithium industries operated in ways that benefited the people.

Twice, the interim government postponed the elections earlier this year. This time when they tried to call off the election, popular protests and labor strikes were so intense that it now appears the Oct. 18 date may hold.

What’s giving the Bolivian rightists pause are the results of a popular opinion poll conducted by the right-wing think tank “Fundación Jubileo.”  The poll found the MAS candidate, Luis Arce, got 40.3 percent. Carlos Mesa, a conservative ex-president representing “Comunidad Ciudadana” got 26.2 percent. The fascist Luis Camacho of “Creemos” came in third with 14.4 percent. Áñez was a distant fourth.

The United States broke diplomatic relations with Bolivia 11 years ago as part of its diplomatic campaign against Evo Morales. The Trump administration restored them in January of 2020 as a sign it approved of the Áñez regime’s repression and the privatizations that the coup government was promoting.

U.S. foreign policy still aims to keep the MAS and Morales from challenging the reactionaries in Bolivia.