Coordinated, coast-to-coast press conferences were staged by Temporary Protected Status activists on Sept. 15 after the Ninth Circuit Court of Appeals upheld Trump’s 2018 termination of TPS. In several cities, im/migrant families with decades of legal residency and U.S.-born children reacted to the disappointing decision on their 2018 lawsuit, Ramos v. Nielsen. 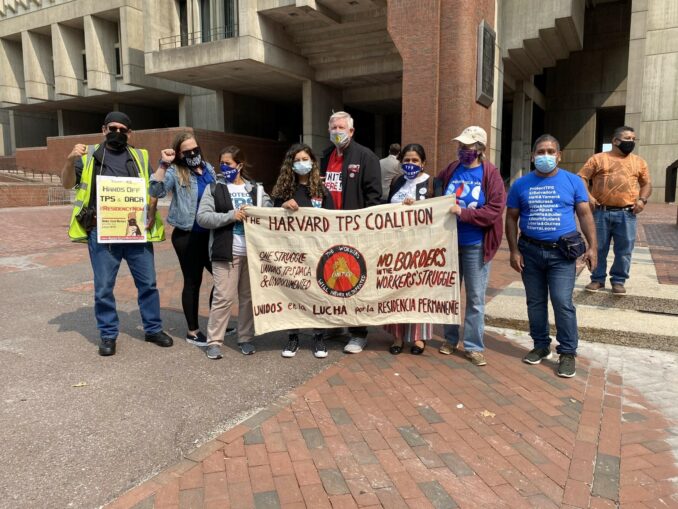 This ruling came just as TPS recipients, who in January are set to lose their legal work authorization, drivers’ licenses (in most states) and protection from deportation, were preparing a second cross-country publicity tour. Boston SEIU 32-BJ member Julio Perez will drive “La Libertad,” the brightly decorated National TPS Alliance bus, across the country from Sept. 21 until mid-November, when it will depart Los Angeles for San Francisco.

The Court of Appeals decision diverged from the Supreme Court’s June finding that Trump acted unconstitutionally when he terminated Deferred Action for Childhood Arrivals. It was hoped that the SCOTUS DACA ruling would lead to a positive decision for TPS-holders in the lower court. The death of Justice Ruth Bader Ginsburg on Friday heaped additional uncertainty on recipients.

Ginsburg’s replacement is likely to be even less friendly to im/migrants, although her own record was also mixed. Days after the DACA ruling she joined right-wingers to “hand Trump a victory on a signature issue” that enabled the deportation of rejected asylum applicants without a hearing (NPR June 25). Residency will be won in the streets!

In San Francisco, where the Ninth Circuit is located, a press conference and rally organized by local supporters of the National TPS Alliance were held outside the old federal building on Sept. 15th. “Ramos” plaintiffs and their supporters spoke out in support of the TPS program. 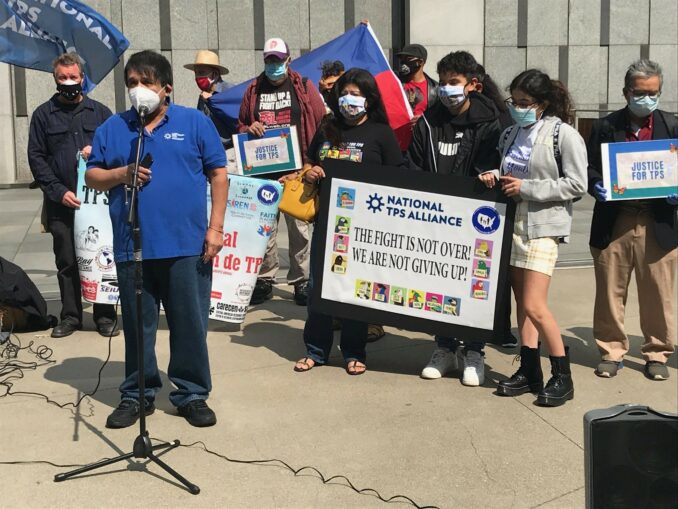 TPS Committee East Bay activist Rosa Carranza said, “We need to fight [for] all the undocumented workers who are working right now without any protection – they are human beings as well. The fight is not just for the TPS workers, the fight is for the minorities who are under attack under this racist administration.” She reminded everyone that “We are not giving up the fight, we are going to fight to the end … and we are going to build a common front with any cause that has been attacked by this administration.”

In Las Vegas activists are having fundraising yard sales ahead of La Libertad’s arrival on Sept. 27. Now, with 4,000 Nevadans at risk of deportation, TPS Committee and Arriba Las Vegas Workers Center activists are not giving up. Pablo Deras wrote on the committee’s Facebook page that “we are and always have been essential, and we will continue to fight for our right to stay here permanently.” More supporters are needed to prevail against legal setbacks, especially in the COVID-19 era.

In Houston, the Central American Resource Center (CRECEN) held a vigil Sept. 17 in solidarity with TPS recipients in light of the Ninth Circuit ruling. More than 100 people, including many families, were out on that balmy evening to demand that TPS be saved from the Trump administration’s attack and that there be permanent residency and legalization for all. How can this government call anyone “illegal,” especially those with Indigenous heritage, when the land was stolen in the first place?

More than half of the 50,000 TPS holders in Texas reside in the Houston area. (Houston Public Media, Feb. 13, 2019) Those with TPS are not the only ones affected by this decision. According to a Center for American Progress report on TPS holders in Texas, some 53,800 U.S.-born children in Texas have parents from El Salvador, Honduras, and Haiti who have TPS.

Houstonians are highly affected by the recent court ruling, and they will continue to fight for their neighbors. “La Libertad” will arrive in Dallas on Oct. 10, then spend the 11th and 12th in Houston before departing for New Orleans.

The Georgia im/migrant community was hit with news this week that women held by ICE at the Irwin County Detention Center in Ocilla, Ga., have been subjected to medical abuse and forced sterilization. Teofilo Martinez answers the Georgia TPS Committee phone six to seven times a week when reporters call, because he was the first TPS holder in the state to organize and has built an activist core in one year.

“Organizing in Georgia is very hard. It is a red state, people are scared,” Martinez, who is Honduran, explained to Workers World. When the #Journey4JusticeII stops in Atlanta on Oct. 18-19, activists will target Republican Senators Kelly Loeffler and David Perdue. Among them may be a caravan including the Honduran Garifuna musicians, who have been a feature of national mobilizations.

In Raleigh, Gregorio Cruz-Lazo told Workers World that, on behalf of 2,000 North Carolinian recipients, the press conference was an opportunity “to express disagreement with the recent terrible court ruling against TPS holders.” The Charlotte and Raleigh-Durham communities also organized a major caravan to draw attention to TPS during the Republican National Convention in August. La Libertad is due in North Carolina on Oct. 25-26. 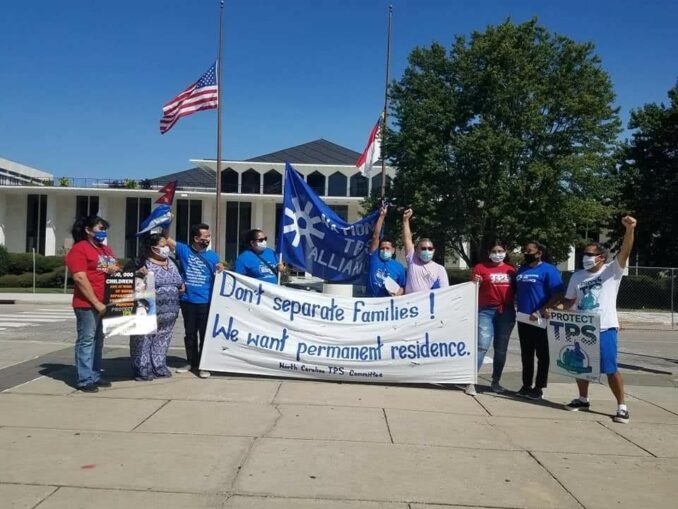 There were also mobilizations in New York City, where it is estimated that 70,000 recipients live in the tristate area. Three days before the death of Justice Ginsburg, Washington, D.C. TPS-holders demonstrated in front of the Supreme Court, then in anticipation of a “Ramos” appeal being taken up by the highest court.

Messaging at the events reflected recognition of the all-out xenophobic assault on im/migrant communities through the attacks on TPS and DACA. The Trump administration has pursued an anti-Black, anti-im/migrant and anti-labor far-right agenda for Wall Street and the ruling class.

However, as Boston labor leader Ed Childs, from UNITE HERE Local 26 and Harvard TPS Coalition, explained to Workers World, “We are sitting on the treasure chest of labor. Through unions or workers’ assemblies we see in the South, we could become powerful enough to beat this. May Day is not the only day we can come out, and union support is needed to win #ResidencyNow.”