As we go to press, a Sept. 21 press release from Georgia Detention Watch announced that Cipriano Chavez-Alvarez, 61, is the third detainee at the Stewart Detention Center located in Lumpkin, Georgia to die of COVID-19. 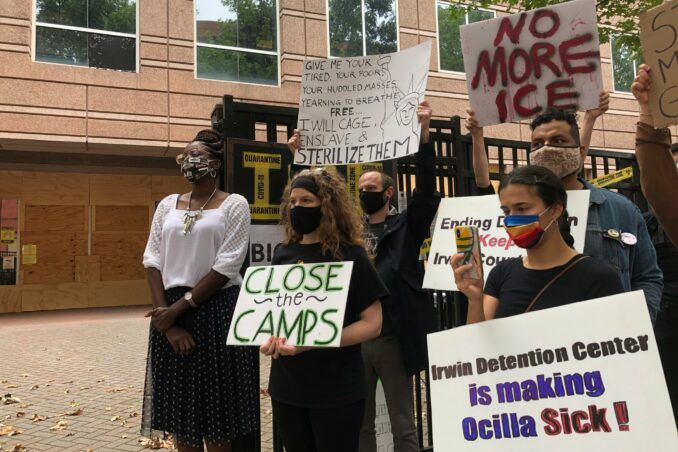 Sept. 20 — In the days since whistleblower Dawn Wooten detailed serious charges against the LaSalle Corrections-owned and operated detention center in Ocilla, Ga., there has been an explosion of media exposés, Congressional action and grassroots activism.

Wooten, a Black nurse at the Irwin County Detention Center, listed a number of medical neglect issues, particularly a lack of COVID-19 precautions, and an abnormal number of hysterectomies and other procedures performed by an outside doctor on women detainees. She said her outspoken attempts to rectify the conditions caused her to be demoted to an “on call” status, creating a financial hardship for the mother of five children. Nevertheless, she stated emphatically that she had no regrets for “doing the right thing.”

A Sept. 15 press conference, hosted by Georgia Detention Watch (GDW) in front of the Atlanta ICE Field Office, came a day after the filing of a 27-page federal complaint with the Department of Homeland Security Office of Inspector General. Every major news media in the U.S. and many around the world reported on the unsettling allegations made by the veteran nurse.

GDW, national immigrant rights groups and women’s health and reproductive rights organizations quickly consulted with each other to formulate plans to mobilize public opinion to close Irwin down. Their petition is available at

In response to the misogynist, dismissive response by ICE to the charges, GDW held  a “Believe Women” rally at the Field Office on Sept. 18. On Sept. 19, Somos South Georgia organized a protest in front of the Irwin County Detention Center in Ocilla, a small town about 200 miles south of Atlanta. Marchers with banners, signs, flags and drums led the way with dozens of decorated cars and trucks filled with defenders of immigrants rights following. The sound of honking horns reached the ears of the detainees throughout the facility.

More information has emerged about the medical malpractice with at least 17 women now identified as having had unwanted, life-altering procedures.

The case of Pauline Binan illustrates the unconscionable power of ICE to deprive immigrants of justice. Pauline, now 30, came to the U.S. from Cameroon as a two-year-old child. She lived in Baltimore with her now 11-year-old daughter and other relatives. ICE took her into custody in 2017.

Despite the efforts of her family to get her released, after two years Binan was still in detention and suffering from irregular periods and vaginal bleeding. She was taken to the office of Dr. Mahendra Amin in Ocilla, who has a contract with LaSalle Corrections to provide gynecological care to detainees. She was diagnosed with a cyst, as were many other women detainees according to the federal complaint.

In Binan’s case, she was told she would have a D&C procedure to remove the cyst. However, what happened instead was that a fallopian tube was removed, rendering her unable to conceive naturally. She insists she did not consent to such a drastic procedure. Moreover, she says she was given no pain pills or medical supplies to change her dressing back at Irwin!

Despite having an appeal of her deportation before the 11th Circuit Court of Appeals in Atlanta, ICE transferred Binan to a Texas facility. On Sept. 16, two days after the federal complaint was filed and one day after the press conference — where Dawn Wooten explained that the women at Irwin called Dr. Amin “the uterus collector” — Binan was put on a commercial flight to Cameroon.

Rep. Sheila Jackson Lee of Texas and Rep. Pramila Jayapal of Washington intervened and forced ICE agents to take her off the plane, moments before the doors were closed. Her lawyer called this precipitous action an attempt to remove a potential witness.

On Sep. 19. Pauline was finally released from detention and is home in Baltimore to await the disposition of her appeal. This is a significant victory.

There is a call for Congressional hearings to investigate all the charges. This would be an opportunity for immigrant detainees and Dawn Wooten to tell their stories before a national audience.

Heroic whistleblower Dawn Wooten and the brave detainees at Irwin County Detention Center have supplied the movement with new ammunition to bring down the for-profit prison corporations and repressive government agencies like ICE.

The writer is founder of Georgia Detention Watch and a steering committee member representing the International Action Center.