Hello, everyone! I’m an activist in Kenosha, Wisconsin – a town that wouldn’t be where it is without United Auto Workers Local 72. I’m a member of Students for a Democratic Society, a nationwide student activist group. 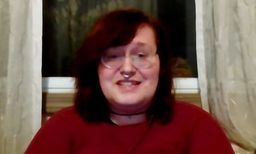 I’ve been involved in many campaigns pertaining to events locally and worldwide, but none have hit me more than the attempted murder of Jacob Blake at the hands of Rusten Sheskey, a Kenosha police officer.

I remember having gotten home from a regular day on Sunday [Aug. 23], when Facebook exploded for me. Messages from other activists nearby, flooding my phone about whether I had heard the news, directing me to a live stream quickly picking up attention, not just locally but nationwide.

A Black man, shot in the back, in my town? In a neighborhood I’ve passed through countless times, blocks from where I went to high school. I couldn’t believe what I was hearing. I could not believe it.

I was scrolling desperately through Facebook to find out if he’s alive, who it was, what happened, anything. And I made the unfortunate choice to watch that video. The video of the attempted murder of Jacob Blake, as he tried to step into his car, an act far from deserving of seven point-blank shots in the back. And while that was hard to watch, what is much harder to take in is the knowledge that the police force in this country can shoot a father [in front of three of his six children] and, so far, get away with it.

We demanded answers: Why was Jacob Blake left on the ground bleeding for an hour? How could they justify shooting him? How many times can this keep happening? Tension escalated, and when police tried to drive a cop car (whose tire had been slashed) into our crowd, it spilled over.

The Kenosha Police Department had already brought riot police onto the scene. That’s key to remember: When you see a protest, look who is dressed for a riot. It’s not us.

Regardless, the police were vastly outnumbered by angry citizens demanding justice and they quickly left. Then people poured from the scene to the police station downtown.

We gathered and we spoke and we expressed our frustrations, and we were met by riot police, by guns on the roof, by SWAT [Special Weapons And Tactics] vehicles pulling up.

But that Sunday wasn’t the end. We carried on into Monday, gathering early for marching and protests. And yet again were met by violent resistance! This has been a pattern shown by the police time and time again.

They claimed we were backed by outside agitators, but the only agitators we saw were all the cops from out of town sent in, the National Guard sent in, the armed militia who roamed our streets, who we were pushed back into. Militia who with the support of the police killed Joseph “Jojo” Rosenbaum and Anthony Huber, two more victims of the emboldened fascist presence in the U.S.

How does standing up to injustice justify being shot, being gassed, being rounded up like animals and arrested for curfew – as my fellow SDS activists, Adelana Akindes and Victor Garcia, were while the far-right militia got to roam free.

Activists from across the country called into the Kenosha Detention Center demanding the release of Adelana and Victor and all other arrested on bogus charges by unmarked officers in unmarked cars–like the Gestapo.

This is fascism and a clear violation of our rights. Students for a Democratic Society stand with all who fight fascism and racism and police brutality. Solidarity with all workers across the country!

In Kenosha, we need justice, and we need a Civilian Police Accountability Council now. Thank you everyone.