The Sept. 8 fire that burned the largest asylum camp in Europe, the Moria Reception and Identification Camp on the Greek island of Lesbos, shows how the 13,000 people there are disregarded and disrespected. 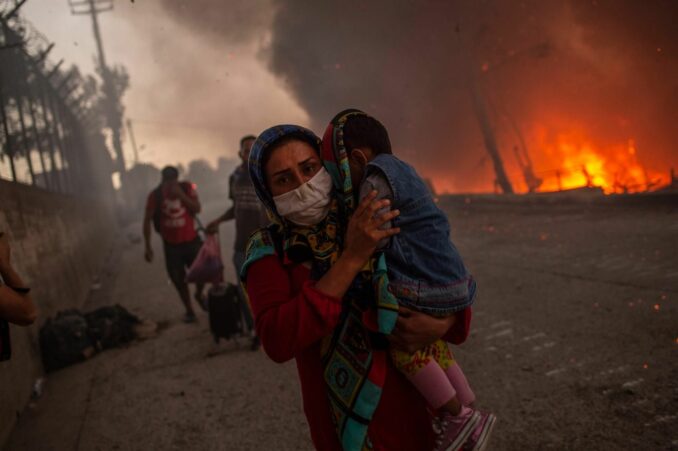 The camp was packed with people — mainly from Afghanistan, Syria and West Africa — who had reached Europe through Turkey.

A week later, the Greek government is still claiming no one died in the fire, but it has acknowledged that it was indeed arson.

Conditions in the camp were terrible, with severe overcrowding, poor sanitation and a lack of soap and water. Asylum seekers lined up for hours for food which was often spoiled. The camp is under a COVID-19 lockdown until the middle of September.

After the fire, the Greek government airlifted 400 unaccompanied minors to the Greek mainland. About 1,000 asylum seekers are being housed on a ferry moored on Lesbos. The government plans to keep all the adults there in a new tent city. Most of the people who escaped the fire have had to “sleep rough” along roadsides and are eating catch-as-catch-can.

Refugees organized a major protest two days after the fire, when they demanded release from detention. Police fired tear gas on the refugees, who were marching down the main road carrying signs reading, “We don’t need [a] new camp . . . we want freedom.”

The 850,000-strong union federation PAME — the All Workers Militant Front, founded by members of the Greek Communist Party in 1999 — issued a statement on the situation in Lesbos:

“This inhumane time bomb planted by the Greek governments exploded in the ashes of Moria. 13,000 people, women and children, stacked [up], without health and safety measures in the midst of a pandemic. . . . [As for] need for immediate help and the release of the thousands of now homeless refugees, the first reaction of the government seems to be the sending of new Riot Police forces!”

PAME made concrete demands that the Greek government “find immediate housing, with the utilization of apartments, closed hotels and buildings that belong to the state. Abolish all laws and decisions that violate the rights of refugees and asylum seekers, as provided for in the Geneva Convention.” (tinyurl.com/y3ogcovq)

Tensions between Greece and Turkey sharpen

The plight of the refugees has been intensified because their fate is tangled up in capitalist competition by regional governments.

In the beginning of January, Greece, Cyprus and Israel signed a deal to build an underwater pipeline to carry natural gas from the eastern Mediterranean’s rapidly developing gas fields to Europe. This deal will bring billions of dollars in profits to these three countries. Cyprus is a small but very prosperous island off Turkey’s southern coast; the northern part is Turkish, the southern two-thirds Greek. It is a member of the European Union.

A few weeks ago, Turkey sent a gas exploration vessel, escorted by vessels of the Turkish navy, to the area. In response, Greece conducted naval exercises with France, with French Rafale fighter bombers flying in the same airspace as Turkish Rafales. Greece also announced a major arms purchase and the addition of 15,000 troops to its army.

It goes on to point out: “The relations between the two countries are further complicated by the competition between the bourgeois classes of Greece and Turkey to become a hub of energy and a transit center and their fierce struggle for the distribution of energy wealth in the region.”

Turkey is trying to use the huge number of refugees it has accepted — who mostly want to go on to Europe, which means passing through Greece — as a weapon against Greece.

Solidarity among the peoples of Greece, Turkey and all of Europe will defang the continent’s predatory capitalist states.