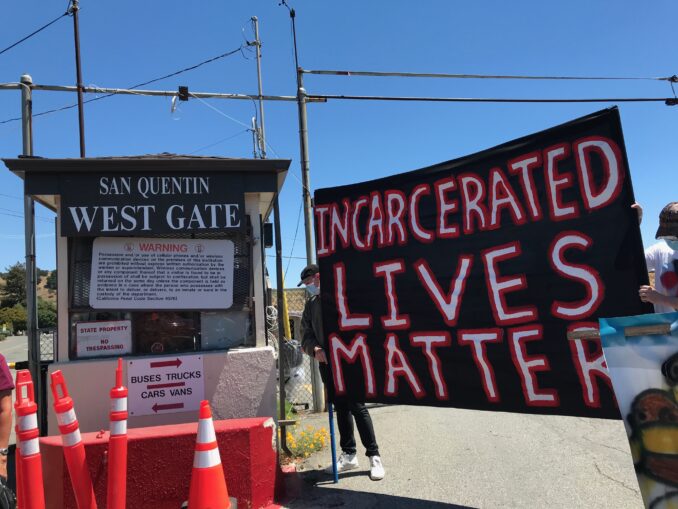 Family and supporters of prisoners at Aug. 2 demonstration at San Quentin protest the spread of COVID inside and the refusal by state authorities to release large numbers of prisoners.

California is burning as the result of countless dangerous wildfires. People are being forced to evacuate their homes. But one population is not being allowed to seek sanctuary from the path of the fires and the dangerous ash-filled air: prisoners.

Prison labor has been used to fight wildfires in California since the 1940s, when the state commandeered them to replace workers drafted into World War II. Prisoners are usually paid $1 a day for their work on the firelines.

Now COVID infections in four out of the six California prisons that train prisoner firefighters have forced authorities to hold inmates in quarantine, according to a recent New York Times article. (Aug. 22)

Incarcerated people also face mounting health hazards inside the prisons. Prisoners told a San Jose Mercury News reporter that they are not being given N95 masks to protect against the spread of COVID-19. They expressed concern because guards are entering prisons with ash on their hats and shoulders, adding to air-quality problems. (Aug. 21)

The California Medical Facility at Vacaville, which contains a licensed hospice, holds a large group of aging prisoners as well as those with serious and life-threatening medical conditions. CMF-Vacaville and a nearby prison, California State Prison-Solano, are both in the path of a massive wildfire.

Family members and prisoners’ rights groups are vehemently demanding that the prisoners be evacuated to safety rather than forced to stay inside airless prisons. The LNU Lightning Complex Fire spreading rapidly near the Vacaville area gives prisoners there little choice — either open their small slats and breathe in harsh smoke-filled air or sit in their sweltering cells without any ventilation. Most prisons in California are not air-conditioned.

The fires are also impacting air quality in and around prisons in California’s Central Valley and along the coast. An Aug. 22 demonstration outside Soledad State Prison was canceled due to concern that the polluted air would endanger family members and other protesters. Prisoners inside Soledad report they are quarantined in their cells, which are now airless. Soledad has no air conditioning or central ventilation system, and prison authorities have closed access to all windows.

COVID levels have spiked at the prison since a July 20 internal raid by authorities on 200 Black prisoners. In a targeted racist attack, guards herded inmates together in the dining hall, ransacking cells, confiscating books and legal papers, and shouting “Black lives don’t matter!” Past prisoner organizing at Soledad includes the actions and writing of George Jackson and other Black revolutionaries. (See Workers World, July 29)

The time has come for Gov. Gavin Newsom to order the California Department of Corrections and Rehabilitation to release large numbers of prisoners who have already been severely impacted by COVID-19 and now face further danger from wildfires raging out of control.

Since the state authorities have no evacuation plans for the endangered incarcerated population, the only solution is to release them all!