Aug. 24 – For nearly three months, thousands of people in this city have joined nightly protests, marches and demonstrations denouncing racist police brutality. While met with heavy police repression, the crowds have continued to gather undeterred, even in the face of federal officers sent by President Trump to “quell” protests in the city. 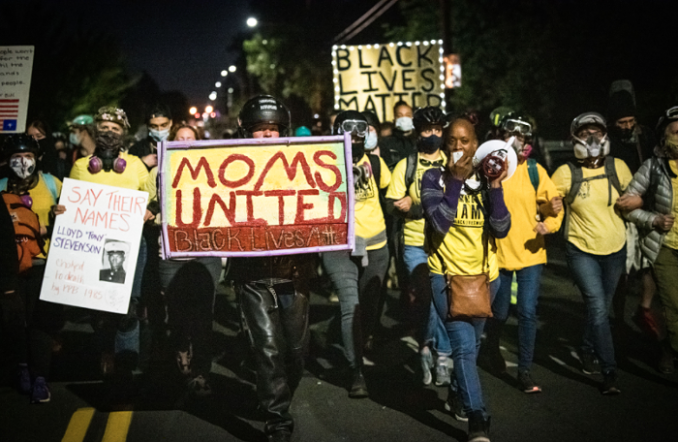 While Trump claimed an early victory, the reality on the ground showed that the federal police presence only inflamed the situation and drove even more residents to come out into the streets. After repeated use of clouds of tear gas and other violent weapons failed to stop the protests, federal officers withdrew from attempts to repress the crowds. Oregon state police came in to replace federal officers, yet those are also being pushed out of the city.

Now back in charge of “controlling” protest is the Portland Police Bureau – which drew widespread condemnation when it deployed tear gas in huge amounts in the early days of the demonstrations. Federal and state interventions having failed, the PPB is essentially back to square one.

The locations of the protests have also shifted over time. Originally concentrated downtown across from a federal courthouse and the headquarters of PPB – which also houses the county jail – protests have since fanned out across the city into residential neighborhoods. The PPB East Precinct and the police “union” headquarters in North Portland have become epicenters of protests, with large crowds facing off against cops who are now using tear gas in residential neighborhoods.

Residents have been rattled by the presence of police in their neighborhoods. The cops often do not wear identifying badges and can legally occupy private property, such as yards surrounding people’s homes, in order to mount surprise attacks on protesters.

An Aug. 14 article in The Oregonian describes the experience of one resident, Karen Roberts, who had up to 30 unidentified officers occupy her yard. “Roberts said when they were asked to identify themselves, instead they threatened her neighbor, saying, ‘Turn your flashlight off or we will come back and arrest you — we know where you live.”’ (tinyurl.com/y45qu88v)

As police repression continues and spreads beyond the downtown core, another familiar threat has emerged: alt-right, fascist street brawlers. A regular fixture in downtown Portland during the summer months over the past several years, these fascist goons – many of whom come from out of state – make it a point to hold violent rallies in what they view as a leftist-dominated city. On Aug. 22, fascist groups held a “No to Marxism in America Rally” in the same area of downtown where the largest Black Lives Matter rallies have occurred.

The PPB has been shown to have a cozy relationship with fascists. Media reported last year on leaked text messages showing that Jeff Niiya, PPB’s commanding officer for the rapid response team that patrols protests, had a warm relationship with Joey Gibson, leader of the Vancouver, Wash., far-right group Patriot Prayer that regularly organizes protests in Portland.

The Williamette Week revealed: “The texts also show that Niiya at times told Gibson where leftist protests were taking place, including unrelated protests as well as anti-fascist marches with people in black bloc intent on protesting Patriot Prayer. At least once, Niiya told Gibson that Portland police were not monitoring a protest hosted by the Queer Liberation Front.” (tinyurl.com/y462yhv4)

The Aug. 22 fascist rally, occurring during a tense summer when BLM protests have grabbed headlines around the world, showed yet again that PPB has a clear bias towards fascist protesters and their sympathizers.

PPB refused to declare a riot – though they often do so with BLM protesters — despite far-right protesters brandishing guns, spraying chemical irritants on anti-fascist counterprotesters and physically assaulting them. Witnesses reported that immediately after fascist protesters left, PPB declared the scene an unlawful assembly and began making arrests of counterprotesters.

Over the past three months, protest in Portland has faced rapid changes. From the deployment of federal officers to the presence of fascist street brawlers, there is much concern in the city from those who oppose fascism and racist police brutality.

Yet crowds have continued to come out night after night, responding to new situations and adjusting their tactics accordingly. Whatever comes next in the city, it’s a given that there will be people confronting injustice and repression in myriad ways.

The struggle started in this long summer has only just begun.